Winslow Eliot talks about "What Would You Do If There Was Nothing You had to Do? 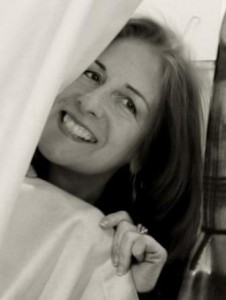 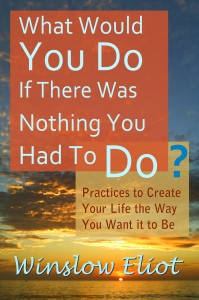 I admit I first became interested in Winslow Eliot because I really thought she had the coolest name on the planet. I quickly discovered that her name wasn't the only thing cool about her. She's not only the author of several novels, including Pursued, A Perfect Gem, Heaven Falls and Bright Face of Danger,  and  she's also written Writing Through the Year, which features some of her writing practices from her WriteSpa. Her latest, What would You Do If There Was Nothing You Had To Do is meant to help writers (and everyone, really) find their natural path in life. And wait, there's more! Her next novel, The Happiness Cure, will be published in 2013. Thanks for writing something for the blog, Winslow!

What Would You Do If There Was Nothing You Had To Do?

Late last winter the title for my first non-fiction book came spinning at me like a galaxy: “What Would You Do If There Was Nothing You Had To Do?” I used the archetypal Fool’s journey as a launching place and from the first step I took over the edge of that cliff, the book seemed to write itself. From the first few pages, the motion forward felt so powerful and ‘real’ that I spoke to people about my project as though it had already been written. Which, looking back, it already had: I found myself rather like the source of a mountain spring – the words, ideas, exercises gushed out of me without pause. I think from start to finish, and writing twelve or so hours a day, I was finished in three months. Then I spent another three months revising, and then having the book professionally edited and finally proofread. The whole process from first page to publication took nine months. I’m serious.
Each time I would come to a place where I thought I’d need more research, or I felt inadequate to express something, it was as though a wand touched my shoulder and reminded me that I already knew everything I know, and it was time to share that. The flow never ceased.
I know that much of the “flow” came from my beloved mother, who had died the summer before, but who never felt very far from me. Her encouragement, enthusiasm, and belief in me permeated this endeavor. So much of the wisdom of the book draws on her wisdom: A woman well ahead of her time, she had an organic compost on the terrace of her New York City penthouse back in the 1950s; she took my brother and me on a freighter trip around the world to teach us geography; and she cared about esoteric thinkers and writers long before it was fashionable. Many friends have told me how she opened a door for them by her practical spirituality, her delight in adventure, her commitment to being generous and helpful to others. Most of all, I remember her passionate injunction to “Have fun!”
From my earliest memories I’ve sought an understanding of the great questions of “What is it all for? What is it all about?” Perhaps by now I’m finally getting a glimpse. “What Would You Do If There Was Nothing You Had to Do? Practices to create your life the way you want it to be” became a synthesis of what I understand so far about “how to live.” One thing I know: Each one of us has to answer this question for ourselves. This book became my humble attempt to help other people discover how to live with joy, serenity, generosity, and fun.
Posted by Caroline at 11:46 AM