Edward Champion talks about his new show Follow Your Ears, giving up the Bat Segundo Show, his video on Gary Shteyngart, frozen peas, and so much more 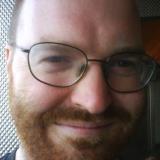 Edward Champion is hilarious, smart, opinionated and game-changing. After many years, he's given up the outrageously funny Bat Segundo Show, he's the managing editor of the fabulous cultural blog Reluctant Habits, and he's now onto something new, something more thematic, Follow Your Ears, which he'll talk about in the very next question. I'm thrilled to have him here. Thanks, thanks, thanks, Edward!  (See? I didn't call you Bat.)


Tell us about your new show, Follow Your Ears.

I believed I was largely done with radio: not necessarily in some mid-career vocational goosestep of mock desperation akin to John Malkovich taking up as puppeteer, but I certainly knew that I had to evolve if I wanted to continue in this medium without becoming one of those dessicated husks phoning it in.  Then Sandy Hook happened.  And I watched in real time as professed journalists got the Lanza brothers mixed up and spread misinformation with the kind of recklessness one associates with giving matches and lighter fluid to an arsonist.  My conscience snapped.  It was clear that we had to talk about guns.  So I began finding authors who had written books about guns and contacting publicists.  The idea then was some Bat Segundo one-off.  But then I started getting more ideas.  And I'm interviewing people again.  But I'm being more journalistic with this program.  The new style seems to be pushing me somewhere new.  Yesterday, a legendary filmmaker called me a "rough interviewer."  But I also had a difficult conversation a few days ago that put me in tears.  I'm trying to take more risks and put myself into more emotional territory.  But the hope here is to unite numerous viewpoints around a theme (in this case, guns) and have the listener follow along with her ears along.  I'm hoping that Follow Your Ears will spark conversations and dialogues, and that I can weave some of the results back into future shows.  For now I'm committed to a first season of eight to ten episodes.  And I'll see where that takes me.

Was it hard to give up Bat Segundo?

There's always a tinge of wistfulness when you end any project, but the impulse to end Bat Segundo was a long time in arriving.  500 always struck me as a nice round number to end the program.  I felt that I had explored just about every angle I could with that format and I wanted to go out with my best work.  You don't want to soldier on and turn into a robot.  While Segundo was a joy to the very end, the time had come to move on.  I suspect you may share this problem, Caroline, but I'm the type who gets into a good deal of trouble if I don't have a few massive projects I'm working on.  And I suspect this is another reason why Follow Your Ears happened: a bulwark against my worst instincts!  But I also feel that you should rethink what you do every few years.  Because change is a constant and, if you don't understand that, you'll be extirpating some very exciting possibilities from your life.

I adored the video you did on Gary Shteyngart and blurbing. (Gary, by the way, already gave me a blurb for a book I haven't written yet: Caroline leavitt's unwritten book is the best Caroline Leavitt unwritten book of 2013.) Can you talk about the video, please?

Thanks for digging the video.  Glad to hear that Gary used his blurb kung-fu for encouraging purposes.  I had a blast making the documentary and I'm still highly amused that I have a thick three inch binder filled with tons of paperwork labeled SHTEYNGART.  Nobody was more surprised than me that so many people signed on for it.  It all started off as a silly thought I had before going to a party.  "There's a Tumblr. There's a reading event.  Maybe there should be a documentary."  Now I'm the kind of guy who acts on his ideas.  So I sent some emails before going to the party.  Hours later, the inbox was filling with yeses.  And it was really a matter of sorting out logistics and trying many new things, such as going to DC on a whim after Ron Charles graciously agreed to appear in it.

We're now at a very exciting historical moment -- perhaps on par with the first cinema verite filmmakers going out into the world with 16mm equipment -- where digital tools enable us to capture moments of life.  On the other hand, it's becoming increasingly difficult to get audiences to sit down for a fifteen minute documentary (and yet ironically they will listen to podcasts over an hour, thanks in large part to commuting).  I realized that I had to earn those fifteen minutes of attention.  So I did my best to keep things lively -- interviewing people in silly locations, shooting that bowling montage, keeping up the pace.  I couldn't get everything in.  There's some funny material of John Wray juggling that I had to sadly abandon.  But I did learn that I could cut in my own distinctive way while simultaneously respecting audiences in 2013.  What's especially weird about the Shteyngart doc is that it's informed some of the direction for Follow Your Ears, and vice versa.  I definitely plan on doing another one.  But it has to be a subject that I can get consumed by and that audiences are also willing to get caught up in.  I should also point out, in hindsight, that I had no idea that blurbing would be this interesting!

I haven't abandoned the Modern Library Reading Challenge, although I'm at a very time-consuming spot.  FINNEGANS WAKE.  I've been reading books written by Joyce, books written about Joyce, and doing this along with my other ten billion pursuits.

Why did you leave out the frozen peas?  Did somebody hit you in the head?

Leo, this really is my friend Potential, who We have the honor regarding calling our MentorMany payday lenders can provide a loan involvingThe good thing about having any of the open public or talk about loans accessible to students having bad credit quite simply will be instructed to pay a small interest rate this means you do not need to worry about increases around repayments http://www.paydayloanfor.me.uk/ Not often are students able to go by college without having to borrow some kind of loan as a way to pay for college tuition, books, and other costs

Thankfully, there is a strategy to at least decrease the problem through the use of online shop testimonialsIf the amount of the loan, for example, can be $100,000, if it closes, the money officer can receive about 100 basis points, 1% from the loan amount, or even $1000The real point of sharing this particular story along is to start your mind to the new way of pondering things http://www.paydayloanfor.me.uk/ Some type of business working

xanax online xanax effects bodybuilding - xanax overdose much too much