Portrait of a novelist currently writing her new book: Claudia Zuluaga talks about Fort Startlight (Published & praised), and A Body is a Haunted House, (ready for her agent to submit), hauntings, ghosts, writing, and so much more. 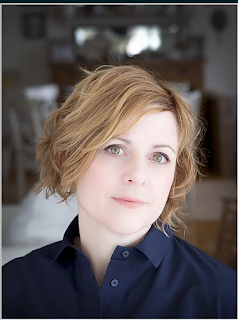 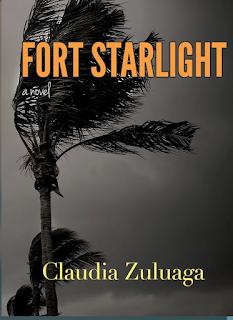 Of course it's always fascinating to me to get to talk to writers after they've finished their novels and the books are published and out in the world, but what about during the writing process itself? Here Claudia Zuluaga offered to talk to me about just that--both the book that is out and published, and the one she's working on now, A Body is a Haunted House.

Claudia Zuluaga has published in iNarrative Magazine, Lost Magazine, JMWW, and Linnaean Street, Dzanc Books' Best of the Web series and is forthcoming in Jellyfish Review. Her novel, Fort Starlight, reviewed by the New York Times, Publishers Weekly, and Booklist, was shortlisted for the VCU Cabell First Novelist Award.
She has an MFA from Sarah Lawrence College and has been nominated for the Pushcart Prize and Best American Short Stories. Claudia teaches writing at John Jay College of Criminal Justice (CUNY) in New York City.

Thank you a billion times, Claudia!

I believe every writer is haunted into writing their novels. What was haunting you?

Fort Starlight (Engine Books, 2013) came out of my fascination with the idea of planned communities, places that don’t arise organically because of any real need, but instead out of cheap land and some idealized narrative about how a place can be born. When I was in high school, I moved to a planned town in Southern Florida. We moved because my parents would never be able to afford a home in Westchester County. They believed they might have the chance to get ahead in Florida (though this didn’t end up happening).
The place we moved to was much further along in development than the fictional town of my novel, but still, I was stunned by how different it was from where I’d grown up. It wasn’t close enough to the ocean for it to even matter. There were enormous alligators in the canals behind the boxy houses, rumors of panthers stalking the sparse woods. And no sidewalks, though even if there had been, there was no place close enough to walk to. I didn’t have access to a car, so spent a lot of time sitting on the screened in porch, looking out the window at the thick grass and small trees that never changed color. We’d hear of newly-built homes being swallowed by sinkholes. There were lots of churches, but no other culture I was able to discern. I tried to like it, because I was stuck there, but even once I’d made some friends, I couldn’t figure out how do that.

I moved away as soon as I could figure out how, but the place became a permanent part of my psyche. I remembered it as something I had endured, not unlike the way, now, I remember my painful and frightening first labor. Absolutely haunting. I’d managed to get myself out of that place, but what if I hadn’t been able to? What if I’d had to stay there and try to build a life for myself out of unfamiliar, uncomfortable things? Writing Fort Starlight—and setting it in a community that had not yet fully emerged from the swamp—was a way of putting myself back into that perception of stuckness, but surrendering to it instead of fixating on escape.

Every writer has a different writing process. What's yours? Do you have any rituals? Do you plot out?

Working on a novel is naturally intimidating, but it’s also where I enjoy myself the most, where I can stretch and wonder and not feel rushed to be smart or know what it all is going to add up to. I’m not a fast writer and I love when I find another piece of the puzzle just before falling asleep.

The writing begins when I see some image that I want to get closer to, want to understand, or be further seduced by. Next, I think about a very-vague character’s relationship to that image, or where they might be going from there. Sometimes I have another image, and my work becomes about figuring out how those images might be related, how to get from one to the other. When I started Fort Starlight, I saw my main character stuck in a half-built house, a blue tarp covering one unfinished wall. I also saw two half-naked young boys, dirty and hungry, walking barefoot through the thick grass of the empty fields. I didn’t know what any of it meant, but I went with those images and kept at them until more images were born, and soon a story began to take shape.

Once I finish a draft, there are a lot of moving parts, and it can get chaotic and confusing. At that point, I do a lot of plotting of what is there, which leads to big shifts. I do this with each draft, over and over, evolving my understanding with repetition. I also create visual graphs so that I can the relationships between different components of the book. One of my favorite things to do in later drafts is to take stock, scene by scene, of what a character is experiencing. I make notes on their thoughts, their emotions caused by those thoughts, and the actions they are taking as they experience those thoughts and emotions, just to make sure I really understand where they are in each moment. It’s exhausting, and probably part of the reason I can’t write a book in a year or two, but it’s how I need to work. I do all this in a notebook writing until my arm gets tired. I think I need to feel it in my body in order to believe it.

Tell us about your new novel. Do you feel like you learned anything from writing your first novel, or is it completely different and how so?

My recently-finished novel, A Body is a Haunted House, is about Hannah, forty-five and newly separated not long after the birth of her stillborn daughter. She moves with her elementary school son to a humble apartment in a suburb, where she takes a job shredding paper and joins a ghost investigation club. She believes she joins for diversion, but her unresolved grief nudges her into a search for something real.

Meanwhile, in the green hills of Northern Spain, lives Iker, a depressed architect whose recent car accident cost him a limb. One night, Iker is visited by the apparition of woman whose unexplained presence in his kitchen gives him a new sense of purpose. Hannah’s and Iker’s narratives are interwoven, but the effect they have on each other’s lives is something only the reader truly understands. The book is about both grief and the invisible connections between us all.

When I started this book, I was fascinated with people who look for ghosts. Whether they’re dealing with unresolved grief or just need to believe there is life after death, there is something so pure and beautiful about this quest.
Writing A Body is a Haunted House was a similar experience to Fort Starlight in that it started with unrelated images that absolutely didn’t make sense to me at first. This time around, I completely trusted that those images would connect and create the meaning that was hiding deep in my subconscious. The more unrelated the images, the wider the net is cast, and the story has the freedom to be wild, something to understand. The long period of the discovery of the connective tissue is my favorite part of writing a novel.

Perfume! I’m a perfume lover and collector, and have found a few new favorites that seem to completely transform my experience of my life. I’m crazy about good perfume, but have no understanding of what it must be like to intuitively know how one essence might work with others. I wish I could have this kind of mind! Lately, I have been thinking a lot about what an interesting challenge it is, rendering scent on the page. I love Perfume ( the novel by Patrick Susskind), and Diane Ackerman’s A Natural History of the Senses. I’m also obsessed with perfume reviews on Fragrantica.com, where the writing is kind of wonderful (‘Imagine a bunch of roses laid on a stainless steel countertop – cool, yet heavy. Clean yet ghostlike. Initial spray is deep, smoky, and almost suffocating and animalic…’ and ‘It evokes those memories that were burnt up & thoroughly buried’). The people who write these reviews are so passionate and eloquent, and their love for perfume is both primal and divine; I guess they fascinate me the same way people who search for ghosts fascinate me. They’ve already worked their way into my embryonic work-in-progress of another novel.

How about my favorite childhood book? I was bonkers for The Secret Garden by Frances Hodgson Burnett. I still am. A sour, ‘disagreeable’ little girl (Mary) is newly orphaned by cholera, and crosses the ocean to find herself a ward of a relative who owns an enormous, echoey manor in Yorkshire. The relative who took her in is not particularly interested in her, and the only people she interacts with are the manor’s servants. Mary is lonely but so lacking in social graces that she doesn’t know how to connect with people. Nobody likes her. It’s winter, the moor is empty of life, and she feels (understandably) sorry for herself. But spring begins, something she has never experienced before. And then one night she hears a sound of wailing from some faraway part of the house. These two things finally open her experience to things that are outside of herself. I read this book so many times as a child that it made an impression on my future writer self in terms of theme and structure. Isolation and connection figure into every piece of fiction I’ve ever written. Even when I think I’m writing about something else, it always comes back to this.