Clea Simon talks about Rock and Roll, the 1980s, memory, and her raved-about new novel HOLD ME DOWN 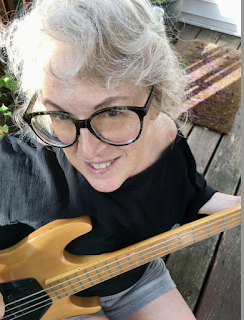 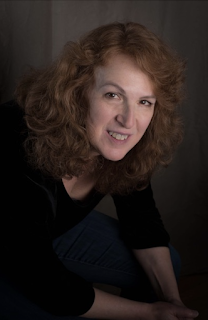 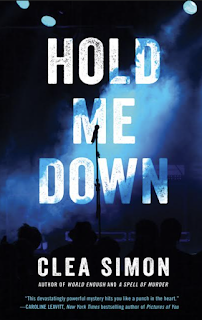 I am so thrilled to Host Clea Simon my blog! Yep, I blurbed her new novel, HOLD ME DOWN, because it is so incendiary, so thrilling, so important, too. And I'm honored to have her here. Thank you, Clea!

Hello! Thanks so much for hosting me, Caroline, and for helping me to celebrate my new psychological suspense, Hold Me Down.
Gal Raver was a rock star. But that was 20 years ago and as HOLD ME DOWN opens she is back in Boston playing a big stage for the first time in years. The occasion is a memorial concert for her late drummer and best friend Aimee, who cofounded the band with her. But as she’s playing she sees – or think she sees – a face from the past, which unsettles her. The next day she hears that that person was murdered behind the venue and Amy’s widower Walter arrested. When Walter chooses not to fight the charges, Gal is compelled to get involved – not only to save her friend but to understand why, for a moment there, she thought “it should’ve been me,” an investigation that leads her back into her own wild, rock star days.

Why did you set this book in the rock world?

For starters, it’s a world you and I both know well! Like Simon at the start of your wonderful With or Without You, Gal begins her journey living in clubland – as did I, once upon a time. Back when I was in my twenties, I not only worked as a rock critic, I lived for the scene. It was my “third place,” neither home nor work. Where I spent my free time, and where I forged so many relationships.
I guess, in a way, those relationships are key. Because it’s such a self-contained world, the relationships that develop in it are great for fiction: the same characters thrown together constantly, with generous helpings of alcohol and other substances, are bound to interact in interesting ways. For me as a mystery writer, the club world functions like an English village would in a classic Agatha Christie novel – whatever happens, whatever crimes and whatever motives – are going to spring organically from a contained cast of characters.
It also interested me, that for all that rock is obsessed with youth with the now, it also constantly seeks to memorialize itself. When we meet Gal, for example, she’s playing a benefit – songs that she wrote twenty-odd years before. And, of course, once something is written or recorded it becomes a time capsule – a reflection of what was happening then. With crime fiction that also allows you to plant clues or exposition
What research did you do?

I tried to evoke the physical memories of those days: Listening to a lot of older garage-punk bands. Picking up my electric bass for the first time in ages. I’d forgotten how heavy it is and how you stand when it’s strapped onto your shoulder.
Other than that, I talked to a bunch of people who were on the scene at the time, many of whom were willing to share some very personal memories. These conversations all fed into my memories – and into who Gal was becoming in my mind. For example, when a buddy who used to sing with a band mentioned how far back into a club she could see from onstage, I thought, “I can use that.” And then, when I have Gal noting that, I realized, well, yes, Gal can see all the way to the dark corners of the club. But is she really seeing hijinks back there, or is something else going on?
So Gal is an unreliable narrator?

Not in the sense of, say, Gone Girl, where the narrator sets out to deceive you. Hold Me Down is written in close third person: Gal is telling us what she believes she knows. But what that is is unreliable as it is for all of us. Our perception of what is happening is always subjective. Throw in memory, and it becomes even less objective, as nostalgia, denial, and regret all tend to shift our understanding of what is real.
This uncertainty is really at the center of Hold Me Down. At its core are really two mysteries: Who committed the murder (and why isn’t Gal’s friend Walter defending himself), but also what happened to Gal to bring her to this point?
Hold Me Down flips back and forth in time, why did you decide to do that?

Really three times. We first meet Gal in the present day, when she’s jaded, sober, but kind of stuck in a holding pattern. In flashbacks, we see Gal at her rock star peak, when she was kind of crazy but unstoppable. But we also get peeks of the young Gal who first started the band with Aimee, nearly paralyzed with stage fright, dying to break though.
I’m realizing that one of my constant themes seems to be memory – not only nostalgia and regret but the way we the past sets us on specific paths
Not to give too much away, but you also deal with trauma – sexual assault and PTSD

Yes, Gal’s a survivor, as am I. As many of us are – but even though we survive, we’re shaped by what we’ve experienced. It’s like we’ve been pushed slightly askew by what hit us.  Our lenses on the world are maybe a bit warped. So again, Gal sees things that are maybe not quite as they should be.
Gal’s songs reflect a lot of what she went through, don’t they?

In a way they serve as touchstones for who she is at any given time. I really enjoyed exploring how she interacts with her own work. For example, when she’s young and anxious, she’s very careful about crafting a bridge to one of her tunes. Later, at her rock star wildest, she dismisses that same bridge as overly fussy and skips over it in concert. What else does she want to skip over?
But these songs exist outside of Gal, too, and the reader gets to see how everyone reacts to them, from the suits from the record label to the fans. And, perhaps most important, Gal’s bandmates, who may hear something different than Gal does – or perhaps than she intended. These songs take on a life of their own, and they serve to reflect back not only who Gal is at any given time, but how she is received in the world.
How would you describe Gal, as she is when we meet her?

She’s fiercely loyal. She can’t leave Walter even though he doesn’t want to defend himself. That’s partly because of her love for Aimee, which she’s transferred to Aimee’s daughter Camille and also to Walter. But she is also coming to terms with the damage she’s done to those she loved.
I love writing about process – what it feels like to channel something and then to craft it, whether that’s a song or a story. But it requires really making yourself vulnerable. You and I have talked about this, how as writers, we have to “go for the heat” and write about whatever feels most immediate or real. You’ve always encouraged me to be brave and do this, and I’m so grateful! I think it’s one of the reasons you’re such a great friend!
A former journalist, Clea Simon is the Boston Globe-bestselling author of three nonfiction books and 29 mysteries. including the new psychological suspense HOLD ME DOWN.  While most of these (like A Cat on the Case) are cat “cozies” or amateur sleuth, she also writes darker crime fiction, like the rock and roll mystery World Enough, named a “must read” by the Massachusetts Book Awards. Her new psychological suspense Hold Me Down (Polis Books) returns to the music world, with themes of PTSD and recovery, as well as love in all its forms. She can be reached at www.cleasimon.com, on Twitter @Clea_Simon and on Instagram @cleasimon_author