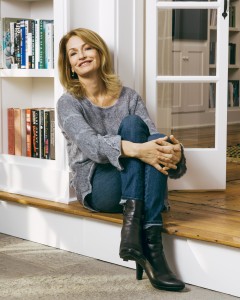 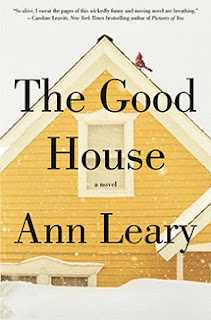 I first met Ann Leary at lunch at Japonica, and we talked and laughed and swapped stories until the dinner crowd began to come in. She's smart, hilarious, warm, funny--and a knockout writer, too. I was so honored to be able to blurb her new novel, The Good House, but even better, I made a friend.  She's the author of  the memoir, An Innocent, A Broad, and another novel, Outtakes From a Marriage. She's also the co-host of the wonderful weekly NPR radio show, Hash Hags. She competes in equestrian sports and is a volunteer EMT, too. Is there nothing Ann can't do? She's going to be reading this Wednesday at the uptown Barnes and Noble (2289 Broadway at 7). Thanks, thanks, Ann!

So tell us how the book sparked?

It's so fun to finally be able to talk about the book and characters after working on them for so long. I'm a recovering alcoholic. I drank alone a lot, so I really understand the blackout/closet drinking from a personal level. And I have relatives who are active alcoholics and know about how powerful denial can be. The character of Hildy is a composite of so many women I know. She's a real New Englander who presents herself as strong and capable, very judgmental, very unsentimental, but she's actually quite fragile and vulnerable and cares deeply about others, though she would die before she'd let anyone know it.

The book was originally going to be about a scandalous love affair between a shrink and his patient. There was a real story in the news a few years ago about a prominent NY psychiatrist who tried to kill himself after his former patient/lover threatened to reveal their affair, which would have ended his career. So originally Hildy was a sort of peripheral character and the book was being told from a third person narrative. But whenever I started writing about Hildy, her character kind of took over, because I understood her so well and finally I realized that I should just let Hildy tell the story and that's when the writing of this book started to work for me. I adore Hildy and originally felt so protective of her that I didn't allow her to be ugly or vindictive. I was protecting her, at first, like a child protects an alcoholic mother.

Sense of place seems to so important in your work. Can you talk about that, please?

I really wanted to write about a small town community. I moved to Marblehead, MA with my family when I was 14. We moved there after moving frequently from one nondescript midwestern industrial town to another. So I was at an age where I was very aware of people and personalities and the New England personality is so unique and unlike the personality of, say, a person from Racine, Wisconsin, that I was always studying all the townies - my friends, their parents. I always envied my friends who had grown up in the town - many had grandparents and great-grandparents who had grown up there and I was aware of a difference between the newcomers and the real townies, who were so deeply rooted to the history of the place.

There were so many wonderful real estate details, that I wanted to ask how you know what you know about it.

Hildy seems to know the tricks of psychics.  Can you talk about that?

Regarding the psychic stuff, I know a few people who claim to have psychic abilities, but I've always been a sceptic, as I am a sceptic of religion and psychiatry, to a certain extent. I came across a series of videos on YouTube by a British man named Darren Brown, who debunks ESP, psychic powers, etc, though he appears to be able to read people's minds. He explains about the tricks psychics use. So I wanted Hildy to have the knowledge of these tricks and to be like Darren Brown. To constantly tell people she's not psychic and that she just uses tricks. But, though Hildy knows everything about everybody else in her town, she has very little insight into her own psyche. She tells us she's one way, but we see her behaving in a different way. So I wanted the reader to see that, though a lot of what she was doing was trickery, she also has a great deal of intuition and insight when it comes to others and some might consider her a sort of psychic. I just wanted to show the ways people turn to organized religion, psychiatry and the occult for answers and that's why I had these themes throughout. Also, I wanted to tie in the whole Salem/witchcraft thing. One of the reasons I set the story on the North Shore, so close to the town of Salem, is because I have always felt that a certain type of female alcoholic, because of the stigma, and their place in their community, feels a bit persecuted, almost like a witch. A person who, by day, tries to show an upstanding, moral persona, but by night engages in something that they love but that is too dangerous and shameful to reveal to others. I have to work on how to explain this in a more concise fashion.

What's your writing life like? Do you show your work to other people?

Oh, I'm totally the nervous/afraid to show others my work. I really have a hard time with that. That's why it's such a relief to find that you and others are liking the book!
Posted by Caroline at 10:21 AM

Sounds like a great read. Must check it out. Thanks.