A marriage, a murder, yoga and more--the whipsmart and hilarious new novel SOULMATES from Jessica Grose 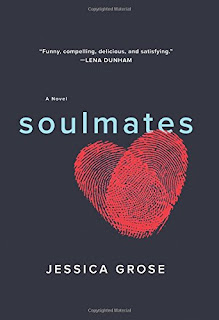 Jessica Grose is an editor at Lenny, also the author of Love, Mom. Her latest, Soulmates is a smart, funny and intensely readable story about what unmakes--or remakes--a marriage,  the trials of yoga, and so much more. I'm thrilled to have Jessica here. Thank you, Jessica!

I love the structure of the book, the way we hear from Ethan and then from Dana, and because I am always curious about craft, I want to know why you decided to do the book that way? This is your second book, and I also want to know if it felt harder or easier to do than your first?

Thank you! I decided to do the book from alternating perspectives because I wanted to show how a relationship—particularly a relationship that’s falling apart—can be interpreted so differently by each participant. At first, you hear Dana’s side, and you think Jeez, Ethan’s a philandering prick. But then you hear Ethan’s side of the story, and you start to empathize with him, and see how their worldviews just became more and more incompatible as he becomes enmeshed in his yoga world.

In some ways this book was harder to write. Logistically it was harder, because I wrote the first book before I had kids, and I wrote the second one after my first daughter was born. But I had more fun writing this one. When I wrote Sad Desk Salad, I was pretty insecure about the whole thing. Like: am I even allowed to write a novel? I’m a journalist, not a novelist, etc. etc. Once I had written and published a first book, I was more confident. I started thinking: Even if I’m a bad novelist, I’m officially a novelist now.

As someone who once walked out of a yoga class after being told I “wasn’t challenging myself and what a shame” because I wouldn’t do a headstand in my very first class—I don’t have kind thoughts about yoga. Do you?

I have complicated thoughts about yoga! I have enjoyed it, particularly prenatal yoga, as there’s something really warm and communal about being in a room full of other cranky ladies in your particular physical condition. I really hate some of the sentiments yoga teachers express, which can be a mishmash of faux Buddhism and something I think of as tea bag wisdom (i.e., the saccharine, uplifting sentiments sometimes printed on the side of tea bags). I know some people really get succor from what their yoga teachers say, but I can’t help but roll my eyes so hard it hurts my sockets. There are certainly yoga teachers out there who have studied Buddhism or Hinduism deeply and have something wise to impart. But I’ve never experienced them.

The novel’s is hilariously funny—and in the smartest way possible.  Do you make yourself laugh while you are writing, or is it serious craft time for you, instead?

I have to ask about the ending—without giving anything away—because it was so tragically hilariously perfect and it gave birth to what I always call “the never ending story” where you wonder what is going to happen to these people beyond the pages.  Did you always know this was how things were going to end up?

I’m fascinated by gurus or all kinds (there is a famous story where Dennis Wilson was telling two girls he had picked up that his guru was the Maharishi, and they said, “Oh, our guru is Charlie Manson.”) Why do you think we are all so desperate to find our answers from anyone other than our deepest selves?

Because getting answers from our deepest selves is difficult and painful, and it’s a lifelong process. It’s much easier, especially if you’re young, or you’re lost, to look to someone or something else to give the answers to you. In some ways, Ethan just traded Dana for a yoga guru. Like when they got married, she was always the Alpha and he just let her decide their lives. And then when they stopped really connecting, he felt adrift and for various reasons didn’t have the ego strength to chart a path for himself.

American Heiress by Jeffrey Toobin, about the Patty Hearst kidnapping. I love pretty much any history of the early 70s (Brendan Koerner’s The Skies Belong to Us, about how planes used to get skyjacked All. The. Time. in the 70s, is also a favorite). These histories are particularly comforting to read in this moment, because with the rise of Trump everything seems so crazy, but then you read about the violence and social disorder of the early 70s and you think, nope, not so crazy after all.

And now for something completely different, Alexander Maksik, author of SHELTER IN PLACE, writes something short and brilliant for the blog


Sometimes books undo you as you read them. Alexander Maksik's Shelter in Place did that to me. About mental instability, prison celebrity, love, loss and desperation, it's shockingly original. I raved about it in the San Francisco Chronicle because it was so audacious and original. A few days ago, I met him at the New England Independent Bookstore Association Reception and he was gracious, funny, brilliant, so I asked him to write something for my blog. And he did.

He's the author of A Marker to Measure Drift, which was named a New York Times Notable Book and a finalist for both the William Saroyan Prize and Le Prix du Meilleur Livre Étranger; You Deserve Nothing, and SHELTER IN PLACE, which I tell you is like nothing you have ever read. Truly, a favorite book of the year for me. He's also a contributing editor at Condé Nast Traveler, his writing has appeared, or is forthcoming, in Best American Nonrequired Reading, Harper’s, Tin House, Harvard Review, The New York Times Book Review, The New York Times Magazine, The Atlantic, Salon and Narrative Magazine, among other publications. Maksik is the recipient of a 2015 Pushcart Prize, as well as fellowships from the Truman Capote Literary Trust and The Corporation of Yaddo. He is the co-artistic director of the Can Cab Literary Residence in Catalonia, Spain and his work has been translated into more than a dozen languages.

At Night We Slept Beneath the Stars
by Alexander Maksik

“I am fine,” Hélene answers, biting at her bottom lip.

I am fine. No contraction. Emphasis on the verb.

Hélene is sixty-four years old, soon to retire from her job as a mid-level bureaucrat in a government agency. Hair thinning, complexion of someone who’s spent much of her life beneath fluorescent lights.

She lets out a frustrated sigh.

She knows the drill but does her best to avoid it.

I smile at her. She shifts uncomfortably in her chair.

“Do you have a favorite restaurant?”

She narrows her eyes. Purses her lips. Is she thinking or does she not understand the question? A silence passes.

I raise my eyebrows.

She sighs. “No, I don’t have a favorite restaurant.”

“Nowhere that you love? Or that you like very much?”

I let her slide.  She taps the tip of her pencil against a pad of yellow paper making small dark marks on the page.  She looks up at me. Eyes so flat.

“Where do you eat at lunchtime?”

“I eat at a bistro near the place where I am working.”

“Where you work? Near your office?”

“Yes, I eat at a bistro near my office where I work.”

“Do you eat there every day?”

Her cheeks take on new color. She scratches at her neck.

“Eat there every day.”

Does she think I’ve trapped her? Forced her to reveal something she finds shameful about her life?

We’re stuck. I’m stuck. I want to talk about what is good, what is better, what is best. That’s the lesson.

“Why are you studying English, Hélene?”

“It is interesting to me.”

She suppresses a laugh as fast as it comes.

Her eyes are brighter now. I try another tack.

She shrugs her shoulders as if to say, what did you expect? Some frightened old lady?

“What was your worst trip?”

“My worst trip was south of France.”

“To the south of France?”

“Yes, my worst trip was to the south of France.”

“I didn’t feel good with my sister.  It wasn’t nice with her.”

She glides her palm over the desk, looking past me.

“You didn’t get along with your sister?”

“Yes. I did not get along with my sister.”

“What was your best trip, Hélene? The very best trip you ever took?”

She watches her hand moving from side to side across the table.

“Yes, Tanzania.  It is the best trip I ever made.”

“Why? Why was Tanzania the best trip you ever took?”

We both watch her hands, her fingers spread out across the Formica, still now, as if to hold the table down.

“You did? You climbed Mount Kilimanjaro?”

“It was very enormous.”

I try to imagine this woman climbing nineteen thousand feet into the air.

“Is that why it was your favorite trip?”

“No, it is that we were sleeping outside. In night.”

“At night you slept outside?”

She nods. There’s depth now to her expression.

“At night we slept outside.”

“That’s why it was your favorite trip?”

“Yes. Because we could see the stars.”

“You slept outside under the stars?”

“Yes, we slept under the stars.”

“It’s a beautiful sentence isn’t it?”

“Yes, it is.  It is a beautiful sentence.”  Now she seems gleeful.

I stand up and uncap a thick marker.  There’s a large tablet of blank pages fixed to an easel.

I write in full, black letters across the center of the page:

AT NIGHT WE SLEPT BENEATH THE STARS.

Her eyes are bright.

“At night we slept beneath the stars.  Will you say that?”

She writes the sentence into her notebook.  She frames it carefully with an elegant rectangle.

“At night. We slept beneath. The stars.”

“At night we slept beneath the stars,” I say, moving my hand as if I might know something about music.

“At night we slept beneath the stars,” Hélene says.

“At night we slept beneath the stars.”

Posted by Caroline at 1:34 PM No comments:

A biblical heroine, an empire of Jewish warriors, miniskirts, and so much more. Emily Barton talks about her amazing novel, THE BOOK OF ESTHER