Leah Stewart talks about The History of Us, Cincinnati, the stories we depend on, and so much more 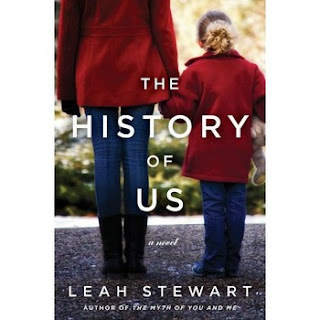 Leah Stewart has a quirky, interesting pedigree--and she's totally cool, too. She's worked as a secretary at Duke, a cataloguer in a used bookstore, a magazine editor, a copyeditor, and a staff member at the Sewanee Writers’ Conference. She has been a visiting professor at Vanderbilt University, Sewanee, and Murray State University. The recipient of a 2010 NEA Literature Fellowship, Leah teaches in the University of Cincinnati’s creative writing program, and lives in Cincinnati with her husband and two children. Her newest novel, The History of Us, is a knockout. Thanks so much for being here, Leah!

You’ve had three other extraordinary novels published and praised, Husband and Wife, The Myth of You and Me, and Body of a Girl. I’d like to know what sparked the writing of The History of Us? What were the new and distinct challenges you faced with this book?

Well, first, thanks so much! This book originated in a different way from my others--instead of having a voice and some idea of a situation, I had a setting (Cincinnati), a theme (location and identity), and a sense that in some way I wanted to model the book on George Eliot's Middlemarch. My first draft, like Middlemarch, had something like ten points of view. It was probably a little confusing.
Point of view was actually the biggest technical challenge for this book. In my other books, I used the first person, and stayed with only one character all the way through. History of Us is not only in third but shifts between three points of view. Writing in the third person was a joy after all that time confined to one mind per book, but figuring out how to organically transition between the different characters was challenging. There was also a lot of structural work because I follow different plot lines with each character, while still trying to advance an overall story about all of them. I read a lot of multiple pov novels--Allegra Goodman's The Cookbook Collector, Carol Anshaw's Carry the One, your Pictures of You trying to figure out how to do it.

Now I'm writing a book that switches between third and first, so I seem to want to keep complicating things for myself.

So much of the novel is about Cincinnati and the idea of how you become more--or less-of yourself, depending on where you live. How did you personally change living in Cincinnati and how did that fit into how you shaped your characters?

I think what's changed about me is that I've never felt settled anywhere before. I grew up military, kept moving around as an adult, and the possibility of picking up and leaving wherever I was has always been in my mind. But I have kids now, and a house, and I'm tenured at the University of Cincinnati, so for the first time I feel permanent. That feeling is a lot of what gave rise to this novel--thinking I might stay here made me very interested in other people's relationship to the place, so I began to pay a lot of attention to that. I had friends move away in part because they always felt they belonged somewhere else, like they couldn't be the most fully realized versions of themselves here, and some of that went into how my character Eloise feels about living here. And the longer I've been here, the more I like it, so my own affection for the city went into Theo.

I wanted to talk about the title, The History of Us, which implies that our lives are stories that we can choose to make sense of in a factual or revisionist way. Can you care to comment?

Yes, that's definitely part of what the title means. It's also literal in a couple of ways: Theo and Eloise are historians, and the book is about in part what to do with the family house, which represents and contains their family history. Living here, I feel very aware of the history of the city, too, because it's an old city and because so many of the old buildings are still in use (my own house is more than a hundred years old). I grew up mostly in the suburbs, so the presence and weight of history here is a profoundly different experience for me.
}
How does teaching effect your writing? And what’s your daily writing life like?

It's a complicated relationship. Teaching stops me from writing pretty regularly. But it also feeds and strengthens the writing, because having to articulate my ideas to students is enormously useful for me, and I learn a great deal from working with them on their manuscripts. During the school year I try to set aside at least one day a week that's devoted to writing, and often I get two, and a little bit of extra time here and there. The nice thing about having a job, as opposed to when I was trying to write full-time, is that when I get to write it feels less like work than like a luxury.

Doctor Who! Seriously. I've come to it late and am a couple seasons behind but I can't stop watching it. Also Sherlock. I'm in a BBC phase. My literary obsession is Margaret Atwood. She somehow manages to offer the best of both literary and plot-driven fiction, which is my ideal. I'm now trying to write a novel with her work as a model.

Let's see. Good books I've read lately? One of my PhD students just published her first novel--Y by Marjorie Celona--and The Next Time You See Me by Holly Goddard Jones, which is out in February, is also terrific.
Posted by Caroline at 6:53 PM