Carol Van Den Hende talks about her eloquent new novel about love and loss and love again: GOODBYE ORCHID. And come to our launch party on September 16! 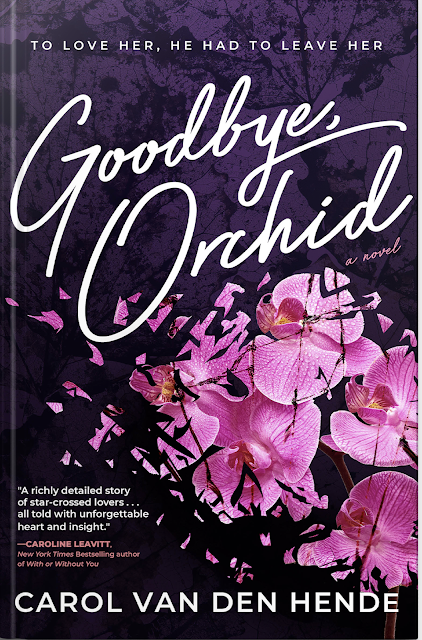 How could you not adore someone who not only attends your book event but comes baring CHOCOLATE? LOTS OF CHOCOLATES? That's the kind of person Carol Van Den Hende is. She's also an author and American Fiction Awards winner who explores the visible and invisible challenges of imperfect heroes and heroines. When she’s not penning stories of resilience and hope, Carol applies her MBA to marketing and strategy (in chocolate!)

Carol is active in her community, as a Climate Reality Leader, as a Board of Trustees Volunteer Officer for a special needs school, and by raising funds for non-profits through the launch of her novel, Goodbye, Orchid. I'm so thrilled to host Carol here. Thank you, Carol!

I always want to know what is haunting an author into writing their books. Was there some question you yourself were grappling with and you wanted to try and figure it out in writing?

“Haunting” is an evocative word, Caroline, for the obsessions that fuel writers to write! There are several themes in Goodbye, Orchid that deal with issues I’ve grappled with: how our lives can change in an instant, the injustice of how we see ourselves versus how others judge us, and the power of unconditional love. Phoenix, Orchid and the whole cast let me explore these issues and more.

What kind of writer are you? Do you plan things out or just wait for that pesky muse!

I love that there’s no wrong answer to “how do you write?” For Goodbye, Orchid, I knew the overall arc of the story, and then filled in the details along the way. The strategist in me loves having the big picture, and the creative side of me loves discovering the twists and turns in the moment!

I deeply admired the structure of Goodbye, Orchid, which seamlessly told the story of two people in and out of love, grappling with an accident that could change both the trajectory of their love—and their lives.  So I have to ask, what would YOU do if you were either of these characters? Would you follow the paths they chose? Or do something else entirely?

Thank you for the kind words, Caroline. There’s so much to learn from the structure of YOUR storytelling. I deeply empathize with the positions of each of the characters – major and minor – and can understand their choices, because their actions stem from their backgrounds and misbeliefs. But since my own background and assumptions are different, I wouldn’t necessarily choose the same paths. For instance, I have so much heart for Phoenix’s position even if I might not behave in the same way.

So much of this gorgeous novel is about what we would do for those we love, and at what cost. Would you talk about this please?

This question reminds me of the heart-warming review you sent after reading Goodbye, Orchid: “What do we really owe the ones we love? How far will we go to protect ourselves at the cost of a relationship? When a traumatic accident near-tragically derails a man’s life, can he dare to trust that the woman he adores will stick by him, despite all he’s hidden from her? A richly detailed story of star-crossed lovers that we root for, all told with unforgettable heart and insight.”

Love is paradoxical emotion, powerful enough to give us strength, soften us into vulnerability, and make us behave irrationally. Phoenix believes he loves Orchid enough to do anything to protect her, even if it’s from himself. But readers may be surprised at his ultimate insight.

What, beside politics and the world is haunting you now and why?

I’ve just been inducted into the latest class of Climate Reality Leaders, which is a powerful way to raise environmental awareness. But besides politics and the world, I’m obsessed with recording studios and audio equipment…because I’m about to record Goodbye, Orchid as an audiobook!

Caroline, you’ve asked lovely and thought-provoking questions. Thanks for this interview! One thing your tiny letter readers might like to know is that Goodbye, Orchid will strive to do good in the world, not just through its message of hope, but also by donating a portion of profits to military and other non-profits.

I’m looking forward to our launch party on September 16th. I hope everyone can join us to chat books and win prizes 7-8pm EDT. bit.ly/Sept16GO