Evan Handler talks about It's Only Temporary, Time on Fire, how brutal honesty can save you, and so much more 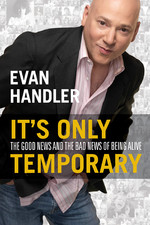 Years ago, before Californication, before Sex and the City, Evan Handler was the name on a book. Time on Fire, that I carried around for a whole year. I was seriously ill then, and a friend insisted I read the book, and I was hooked by page one. It was dangerously funny, subversive and honest, and it helped me so much, I emailed Evan way back then. I'm honored to have him here to talk about his books, his life, and anything else he wants. Thanks, Evan.

However, the patients may feel more comfortable telling them their
feelings, because they feel as if they won't be judged. Remember that you are usually limited to a number of sessions so you might want to consider paying out of your own pocket. He told me that occupational therapist suggested him to choose ergonomic products or peripherals such as ergonomic keyboard,ergonomic mouse and ergonomic chair.
Feel free to visit my website : alcohol depressant tequila

Wow, I had no idea Evan Handler had so much dimension. Great interview. I think I'm going to read both of those books.

What are you talking about? Your comments have nothing to do with this article.