Larry Baker talks about WYMAN AND THE FLORIDA KNIGHTS, Florida, mortality, writing, the looming presence of Trump, and so much more.

Larry Baker is the author of From a Distance, The Flamingo Rising, The Education of Nancy Adams, Love and Other Delusions, A  Good Man, and his latest, most wonderful novel WYMAN AND THE FLORIDA KNIGHTS.  He's also become a treasured friend and I am delighted to host him here! Thank you, Larry! 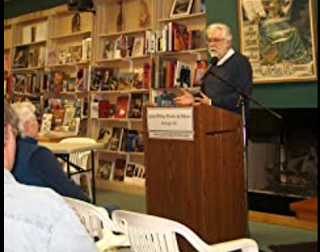 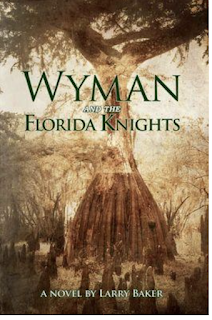 I always believe that writers are haunted into writing books. What was haunting you?
Haunted? Oh, other than a compounding fear of death and obscurity. I am 74.  I have published seven novels. I think my best one is still trapped inside me, but I have less and less time, less and less energy. Cliched metaphor warning: A lack of sand in the hourglass haunts me.

For WYMAN, I wanted to do something I have never done, attempt historical fiction. Not focusing on an individual, but a family over centuries. Having become a grandfather, myself, I am more aware of my own past, and I see my future in my grandsons, my family story continuing with them. I am optimistic about their future, but as I was writing WYMAN, I began to see how a family often has to overcome its past, its origins. In literary terms, the Faulknerian sins of the fathers. I'm a lapsed Baptist, a current Catholic agnostic, but I have never shed my Christian sense of guilt. Go back to Cain and bel, and toss in an artist's Faustian Bargain, and you'll understand what was haunting me.
What's your usual writing life like, and has it changed during the pandemic?

Sadly, I write less and less nowadays. That began when I finished the first draft of WYMAN a year ago. Old age, some family health problems, life itself has changed how I write. If the Pandemic had occurred a few years ago, with the enforced isolation, I suspect that I would have written one or two more novels. I no longer have the five hours a day of uninterrupted isolation that made me productive in the past.
WYMAN and the Florida Knights is actually dealing with really contemporary issues. Can you talk about that please?
The story begins in 1866 with the arrival in Florida of the Northern Evangelical Thomas Knight and it ends on Election Day 2016 before the votes are finalized. Trump is a looming figure in the background in 2016 but this  story ends before the polls are closed, so the reader will have to imagine how his election will change the characters' lives. The Knight family came as Northern Republicans but their kind of Republicanism has devolved by 2016 and they are about to be usurped by darker forces. Thus, WYMAN is about how Florida is the avatar of American fragmentation. That sense of political fragmentation has parallel stories of alienation in the private lives of all the characters. Fathers and sons. Husbands and Wives. Artists and art. All unable to connect. But the story has a hopeful side. The old Knights are gone, but a new generation is rising.
Throughout my story, the characters are all battling to determine who tells their story. The central character is Sandra Knight, the owner and editor of the small-town newspaper. One of my favorite chapters in the book is when she goes to a T4ump rally in Orlando. Plus, the role of journalism (my first college major a million years ago) has always intrigued me. Sandra has to deal with every economic and social force that is killing newspapers all over America. Of all the characters in WYMAN, she works the hardest to keep her town from vanishing.
I always want to know, do you feel that a new book grows out of an old one, or must you wrestle with something completely new?
Well, since most of my novels have been under-whelming sellers, I can safely steal from myself and most new readers will never know. So, if I were an objective critic of Larry Baker, I would say that he is perennially writing about a few themes that recur over and over in his work. Emotional obsessions top that list. Misguided love, a quest for the ideal mate, sins and moral lapses done in the pursuit of some idealized "other." My first novel, FLAMINGO RISING, had a character named Alice, inspired by a real person. But, with that character written, that inspiration became irrelevant.
My novel, A GOOD MAN, also had an Alice who was hiding from her past. The second Alice was not inspired by the real person who inspired the first. WYMAN also has a character named Alice.

Other recurring themes? A quest for faith. And the universal theme of fiction--identity. How well does a writer know his characters, how well do they know themselves? With WYMAN, I made ample use of a trope I first explored in A GOOD MAN, how a character hides themselves in a name. I named a character Harry after a boy named Harry in a Flannery O'Connor story and after a radio DJ in a Harry Chapin song. Their stories, written by other writers, became the background for my own Harry.
Me, I have always hated my own name, Larry Baker. I look into a mirror, I do not see a Larry Baker.
I love that you write about Florida, especially now with all that's happening there. Talk about that, please.
I lived in Florida for three years, enough time to accumulate a ton of material for fiction. It's a unique state. In the early 1800s, it was the least American of all the other states. part of that was its Spanish background, but the single most important distinction was its natural environment. Today, science and capitalism have destroyed that original environment. Today, Florida might be the most American state, a hot mess, the worst of what America is becoming.
What's obsessing you now and why?
Did I mention my sense of dwindling mortality? In literary terms, I might have one final project. I self-published a political novel in 2005, ATHENS/AMERICA, but I was never happy with it. It was too autobiographical, and thus too off-putting for most readers. Surprise, surprise, I am not always a sympathetic character. But the core of that story, how do fathers deal with the loss of a child, was still compelling to me. I needed another voice in the story, an observer of the two fathers in my original version.
As I looked at ATHENS again, I imagined a new character, arriving. Adding him let me create a backstory for him. I'm going to self-publish my revised novel in 2022. New title? THREE MEN AND A DEER.
What question didn't I ask that I should have?
I dunno, maybe, "Have you dusted off your mantel and made a space for your future Pulitzer?" Or, "Your wife must be incredible patient and forgiving. Why did she marry you?" But here's a question that I like to ask other writers: "Is it possible to write an honest memoir?" People tell me all the time that I should write a memoir, but I have a simple answer: Never. I've been writing fiction for almost sixty years (not to be confused with publishing fiction.) Any processing of my life has been done through that, turning facts into fiction.