A gorgeous, practical, loving and lovely book by a mother and daughter team about how to process your mom's death. Suzy Hopkins and Hallie Bateman talk about WHAT TO DO WHEN I'M GONE 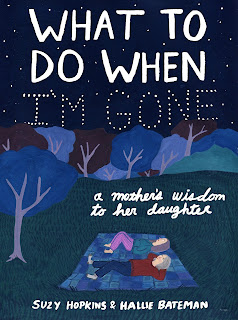 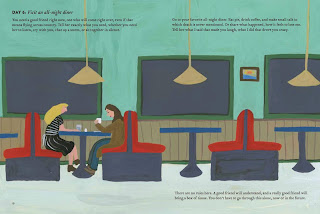 This gorgeous book, WHAT TO DO WHEN I'M GONE popped in the mail a few weeks after my mother died. At first, I didn't think I could open it, let alone read it, but then I did, just to read one spread, and it moved me so much, I read more. It's full of practical suggestions to deal with grief, and best of all, it includes recipes because after all, food nurtures us, too.  So of course, I reached out to them to host them here.

Take a look at the raves:

"A true collaboration . . . Readers may expect that this mother-daughter exercise is heartfelt but will probably be surprised by how thorough it is in its thoughtful treatment of how to handle one's own life and death in addition to the loss of a loved one." - Booklist

"The advice is always warm and often wise, accompanied by illustrations that often reflect a playfulness reminiscent of Roz Chast. This isn't a morbid book, nor a particularly dark one, but a book about facing the inevitable with grace and good humor." - Kirkus
"Full of the kind of counsel that will have readers longing to call their own mother, the book additionally features recipes that, while lacking in precision, exemplify Hopkins's charming, loving voice." - Library Journal

Hallie Bateman is a Los Angeles-based illustrator and writer whose work has appeared in the New Yorker, the New York Times Magazine, Lenny, BuzzFeed, the Awl, and elsewhere. Her creative journal, Brave New Work, was published by MOMA in 2017.

Suzy Hopkins is a former newspaper reporter who since 2008 has published a quarterly magazine (Friends & Neighbors, www.seniorfan.com) for boomers and seniors in California's Central Sierra. She is also Hallie's mom.

Thank you so much Hallie and Suzy!

What surprised you in writing this book together?


Suzy: How emotional the process was at times. Writing the segment about Hallie’s first birthday after my death, I was suddenly struck (and in tears) that I would miss wonderful moments and days in her future; it had simply never occurred to me. The quip “I’m the victim here” sprang from that realization. And when we completed the draft, I cried for a long time. It was the cumulative product of the depth of our discussions over two years, my love for my children, and facing the inevitability of our future parting.


Hallie: I was surprised by how bratty I was. The book was all about how invaluable and irreplaceable my mother was to me, and yet while we worked on it over the course of two years, I’d get frustrated. My mom believed the book would work, that it would sell. She thought it was so powerful. I believed it too, most of the time, but then I’d have doubts and fears about it and I’d take it out on my mom by being irritated and impatient. She didn’t seem to take it very personally. When I apologized, and she said not to worry. She’d had a mom, too. And she totally understood.


I cried at the ending of the book, but I cried in a good way. When you began writing this book, was the finished project what you initially thought it would be?


Suzy: Believe it or not, I didn’t realize until partway through that this was going to be a graphic memoir. I wrote and wrote, and couldn’t understand why Hallie wanted to chop so many words. Once I understood, I got better at adhering to her vision: make segments as concise as possible and let illustrations replace or incorporate some of the text for greater impact. We spent a lot of time talking, parsing, debating, rewriting. At times I had to struggle to accurately convey (or even piece together) my beliefs; I didn’t want to commit anything to print that wasn’t my actual advice to my children.


Hallie: Once we decided to try to make a book not just for ourselves, but for the wider world, our vision was for it to be just what you said: a book that would make you cry in a good way. Those are my favorite cries! So I’m glad to hear we succeeded.


I hope you both will write another book together. If you do, what will it be about?


Suzy: I’d like to explore another book on coping with loss. There are so many people grieving without substantive emotional support, and I love the idea that a book can provide a bit of comfort.


Hallie: I’m down! I might just need to take a breather for a few years and make some slightly more light-hearted books so I’m emotionally capable!


I imagine that different people will take different things from this. My mom was complicated and not always loving, so the rent-a-mom page especially got to me. But as a mom myself, I also loved the pages about how to be a good mom, how to always love and forgive. What pages resonated the most for you?


Suzy: Day 21, in which I advise Hallie to go for a walk in the woods. When your parents die, it changes your place in the world. When my mom died, I realized that my brothers, sister and I were next up on life’s diving board into the unknown. It came as a shock, just as getting old does (at least for me). And Day 2000, which was prompted by a dream I had in which my mother visited me; it was so real, as if she was there in person, and I found it very comforting.


Hallie: The page about suffering has come in particularly handy. I recently had a bad foot injury that landed me in the ER at 3 AM. I wanted to call my mom and wake her up. Then I remembered the page about suffering in the book. My mom says to think of all the people out there who have it so much worse than you. It helped me grit my teeth through the pain.


Suzy: Learning how to operate and service a chainsaw, because I just bought a rural property where trees are falling right and left. In terms of future writing, I’m obsessed with different types of loss – loss of love, friendship, our place in the world – and learning how to push through sorrow and recalibrate one’s life and sense of purpose.


Hallie: I’m working on a screenplay with my younger brother, Nick. He’s flying down to LA from Northern California to hole-up with me for a week and write, just like my mom and I did while working on this book. And I feel like working on this book with my mom prepared me for how messy and rewarding working with family can be. And how making art together can bring us even closer.


What did working on a professional project together teach you about each other?

Suzy: I was so locked in my mom role that I saw Hallie almost solely as my child even though she was an adult. Working with her, I realized she’s a professional with an amazing creative eye and ability. And I was comforted to learn how strong she is, because I know she can handle my inevitable departure – hopefully not anytime soon.


Do you feel okay about your mom dying now that she wrote a whole book to help you through it?

Hallie: NOT AT ALL. This summer, after I turned in the final pages of the book, I called my mom, feeling sad. “I’m still scared,” I told her, “I thought I would feel better once we had the book!” I don’t remember what she said, but it was probably wise and funny.