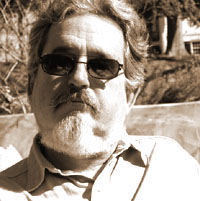 T.R. Hummer is a native of Mississippi. He earned his BA and MA from the University of Southern Mississippi and the Center for Writers and his PhD in 1980 from the University of Utah. He has served as editor of The Kenyon Review and The Georgia Review, among others, and is a professor of English at Arizona State University.Among his honors are a John Simon Guggenheim Memorial Fellowship and an NEA Fellowship. Hummer has played saxophone in the Skinner Brothers Band and the Richmond-based jump blues band Little Ronnie and the Grand Dukes (Young and Evil, Planetary Records, 2001). Thank you, Meg Pokrass for interviewing him! His publications include the poetry collectionsEphemeron (LSU Press, 2011), which won the 2012 Mississippi Institute of Arts and Letters Award for Poetry, The Infinity Sessions (LSU Press, 2005), Useless Virtues (LSU, 2001),Walt Whitman in Hell (LSU, 1996), The Angelic Orders (LSU, 1982), and The Passion of the Right–Angled Man (University of Illinois Press, 1984). He is also the author of two collections of essays, most recently Available Surfaces(The University of Michigan Press, 2012), which was a selection of the Poets on Poetry series.

What was it like growing up isolated in rural Mississippi rather (or totally) isolated as a kid, and what kind of reading did you do, growing up?

I was born in 1950 in a Mississippi still under the baneful spell of Jim Crow, a  context so complex that it is difficult to describe succinctly. Furthermore, the situation there obviously was completely different for Caucasians than it was for African Americans (that difference, alas, was rather the point). My family were racist to the bone, as they were all caught in the same cultural web. The farm I was born on was still in some senses feudal, and its very existence depended on a serfdom of race. My situation therefore was also not quite like that of my contemporaries who lived in more urban places. On the one hand, it was Edenic: the farm (2400 acres divided up among various family members) was reasonably safe, and I was given free rein in it, so much of my early childhood was spent wandering unsupervised, Wordsworthian as a lonely wandering cloud. At the same time, with love in their hearts (and quite unconscious of what they were doing), my family were plucking out my eyes: for if the underclass in a racist culture is "invisible," the reason for that is the blindness of the "overclass," and just how does one get there except via the systematic blinding of the young?

For the generation of my father and mother, there were few opportunities for light to penetrate: they grew up deeply enmeshed in the local. My generation was  luckier, and while I had no real human mentors in that distant universe, I did have several advantages: television, radio, and what in those days we quaintly called "the record player." Deep in the night, with a transistor radio plugged into one ear, I listened to music coming from afar: from New Orleans, Memphis, and Chicago. Almost all of this music was what used to be called "race music," and I was in awe of it. Meanwhile, nightly in the living room my father would tune the cubic black and white RCA tv to the news, and I would sit on the floor caught between the outrage of my father and the passionate reason of Martin Luther King: who do you think eventually won my loyalty?

What books did you pick up and what captured you then?

Books were always there, and I read omnivorously and indiscriminately, which is the best way to read. I read garbage and masterpieces without making much distinction between them: if the book took me somewhere (anywhere) other than where I was, I embraced it. The other media probed my immediate situation and put me slowly but surely at odds with pretty much everything in it; books were a portal out. I needed both.

I have an 11 year old daughter, so for the past 10 years 95% of the films I've watched are made for children. I'm grateful for that, for otherwise I would never have got so deep in the universe of Miyazaki, or appreciated the genius of somebody or other at Pixar. It's great to be an older parent of a younger child: I have also revisited tons of books that I would never have gone back to, and discovered a lot of new ones--for her and for myself.

Talk about your current work, what you are working on now. What is new?
I have been for some years at work on what I had thought of as a trilogy of poetry books: Ephemeron, which came out in Nov. 2011, Skandalon, scheduled for Fall of 2014, and Eon, which is finished but my editor won't look at it yet: I'm being too prolific for the queue to deal with. I wanted it to go under the collective title Greek Fire. My press won't hear of it, aren't interested, would barely even talk about it. There is no profit in trilogies of books of poetry, they tell me: the end. So there will be no trilogy, just three books with similar titles and similar designs. Therefore, I will reserve the title Greek Fire for a new and selected, which in my mind will follow Eon

What obsesses you?
I'm obsessed with the music of language, the language of music. There is a mystery in the connection between music and language that is so deep, and so thoroughly human, that we will never be done with it.
Posted by Caroline at 9:21 AM