A brave book of love and understanding: A Girlhood: Letter to My Transgender Daughter by Carolyn Hays 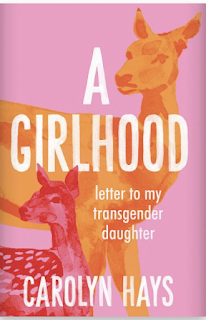 Listen up because this gorgeous, luminous, tear-your-heart-out and patch-it-together book is a love letter to the author’s brave transgender daughter. Please buy copies for friends, buy copies for yourself, buy copies for those who might rail against this so that they might read, open their minds and understand.

Carolyn Hayes is an award-winning, critically acclaimed, bestselling author who has chosen to publish A Girlhood; Letter to my Transgender Daughter under a pen name to protect the privacy of her family. Her novels have been published by Hachette, Simon and Schuster, and HarperCollins; her books are also widely translated. A Girlhood will have four overseas editions, including those by Picador UK and Flammarion in France. Her past books have been listed as New York Times Notable Books of the Year and Kirkus's Best Fiction of the Year, and she's written for National Public Radio and the Washington Post.   www.carolynhays.

So much of this beautiful memoir is about faith—the right kind of faith. Not about whose god is more powerful and why we should fight wars over it. Not about whose laws are more important. Yet, if you boil things down, the true nature of God is love, acceptance, kindness. (We also do not know if God is male or female or something uniquely God.) At several points you actually point this out to Catholic institutions. Why do you think people are so afraid to face their religions and say, maybe I want something differently, something more godly than what I’ve been told? How did your faith change?

If someone of faith truly admires and cherishes God’s creation—the rich beauty and complexity of our humanity—then why would they try to reduce gender to something that can fit in a box marked M and a box marked F. The complexity of our humanity (as well as the mysteries of the divine) have strengthened my faith. I’m awed, as I think we’re called to be. So, as I say in the book, in our house, we don’t snub God. We don’t try to reduce and simplify his work.

We’ve had great support from the Catholic community and some heartbreaking rejections.

What I want to say to parents is this: don’t let your faith leaders or politicians try to get in between you and your natural, abundant love for your child. If an organization is trying to make you choose between love and acceptance of your child and them, they aren’t a community of love. We’re made in God’s image. He loves us; we love our children. Full stop.

The fascinating thing to realize is that your daughter is never stuck. The trauma belongs to you in this narrative—but not because you wish it weren’t so, but because you don’t know the right thing to do all the time. What was it like writing this book, and even more importantly, what was it like finishing it, and what is it like knowing it is going to be out in the world?

I knew I’d write this book one day but my hope was that it wouldn’t be necessary. That the rights and respect for the trans community would be strong and this memoir would feel antiquated. The opposite happened. The horror of having someone anonymously report you to Children and Protective Services for supporting your transgender child has since been signed into law by Governor Abbott of Texas where it’s being challenged while also terrifying the families who support their trans child. In eighteen states, transgender kids are banned from sports. In Florida, Governor Desantis is working to take away transgender medical care for kids in his state. There are death threats against doctors who serve trans youth; a bomb threat against Boston Children’s Hospital earlier this fall. This country has become completely unhinged around gender identity. Today? A New York Times piece that will be used as a battering ram to take away more trans healthcare, again targeting trans youth.

But, as it was from the start, out there, the world is a mess. But my daughter? She’s thriving. She’s funny and smart and knows herself. She’s now a teenager and she’s kind and cheeky and brightens every room she walks into. My daughter is so elegantly and wholly herself. So many factions in American culture want to distort who they think she is, but they don’t know her.

You said this astonishing thing: that every child teaches you how to raise them. This goes against every parental advice I’ve ever received (which I never followed) and it is brilliant. Can you tell us a bit about how your daughter taught you?

Yeah, I guess parenting books don’t work when the writer admits each child needs their own unique parenting manual.

When you’re on a journey with someone who’s had to fight to be their true self—their authentic self, you start to think about your own authenticity, not in gender necessarily, but in all the ways in which we hide who we are, who we could be, from not only strangers but those we love. It’s amazing to be reminded, over and over in simple daily ways, that you can be yourself.

We’ve been taught, my generation, that the liberal thing to do was not to see color, not to see a difference if someone is gay or trans, but I’m learning that that is wrong. We should see those differences AND celebrate them. More books, more images, maybe what we love in the celebrities is their celebrating their differences. But what would you say to the people who say, oh it’s just experimentation, it’s just fashionable, kids cannot really know who they are or celebrity is fake?

I’ve woken up every morning of my life and known that I’m a girl and then a woman. It’s been such a clear deep down truth that I don’t even acknowledge it. But then again, I don’t have to because every day of my life, the world around me has mirrored back to me that I’m a girl and then a woman. The American Academy of Pediatrics has a chart that shows the stages of development around a child’s understanding of gender—their own and others. My trans daughter followed that chart on the exact appropriate timeline, just not in the way we’d expected. Instead, she followed it as a girl; she was clear. Some kids do experiment with gender; some are non-binary. Some children would like to be out but have to reel it back in because their safety is at risk; this can be seen as a flip-flop but it’s actually a reaction to the flip-flop on supports around them. I’ll say this: it’s very different when a child is persistent, consistent, and acute.

How is your daughter doing now? Are you worrying less for her? How will she approach the publication of your book?

She’s not thinking about the book at all. She’s busy with her life. Her French is really coming along. Math is sometimes tricky. She’s making a Christmas gift list that is, um, very long and detailed. She’s the baby of the family and roundly adored. I worry about all of my children in different ways; it’s something I’ve really honed.

But I have hope that the tide will turn. And we’re seeing signs of it in the younger generation who came out strong to vote in the midterms.

I have to have hope. My faith demands it.

Posted by Caroline at 1:28 PM No comments:

Stephen Policoff talks about Dangerous Blues, his "kind of a ghost story," being haunted and disorganized, and so much more. 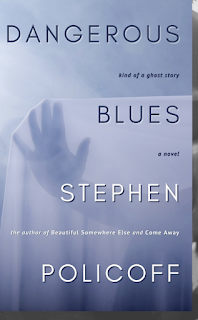 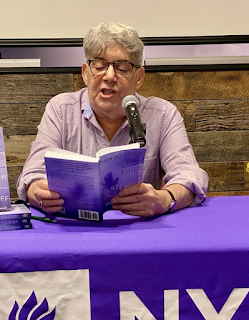 Stephen Policoff's Dangerous Blues has been called "kind of a ghost story." It's about love and death and one man and his twelve-year-old daughter being haunted by the loss of the woman they both loved.
Says Susan Choi: "Policoff is a seer of the ineffable, the unbearable. A joy to read."

Policoff's first novel, BEAUTIFUL SOMEWHERE ELSE, won the James Jones Award and was published by Carroll & Graf in 2004. His second novel, COME AWAY, won the Dzanc Award, and was published by Dzanc Books in 2014. His third and most recent novel, DANGEOUS BLUES, was recently published by Flexible Press. He is Clinical Professor of Writing in Global Liberal Studies at NYU.

Posted by Caroline at 1:14 PM No comments: