Alex George, author of A Good American, writes about A Life Lived Elsewhere 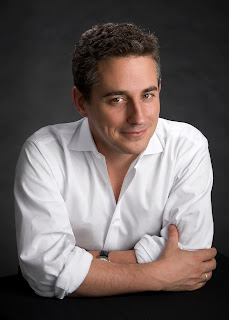 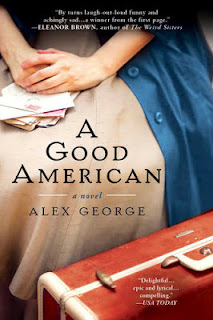 One of my favorite books of the year has got to be Alex George's A Good American, now in paperback. It pulses with life as it follows an immigrant family through decades of fascinating history, and it's captured all of the best adjectives: moving, funny, unforgettable. Plus, Alex is one of the most wonderful people around. I'm thrilled to have him back on the blog (any time, Alex. My blog is your blog). Thank you for this great essay.

For the past forty years or so, my parents have lived in an ancient market town about seventy miles west of London.  I spent a week there last summer with my children.  When we weren’t watching the Olympics, we took my parents’ dog, a lovely old black Labrador, around the same fields where I used to walk her predecessors as a teenager.  As we went past the pristine cricket pitches of the local private school and trekked through the adjacent dilapidated cemetery, I was struck by how reassuringly familiar it all was.  It’s been almost twenty-five years since I left home, but the intervening time always vanishes as I walk past the familiar landmarks of my youth.

I live four thousand miles away from my parents now, in central Missouri.  I moved to the States almost ten years ago, and although I am happy here, every time I return to England I am struck by both joy and a sense of loss.  Missouri has natural charms of its own, of course, but they are not the same – by which I mean, of course, that they are not mine.  I can admire the lakes, the trails, and the sunsets of the Midwest, but they are not freighted with the same warmth of memory that enriched those rambles with my parents’ aging dog.

Paradoxically, England seems to exert a stronger claim over me the longer that I live in America.  I find myself increasingly nostalgic for my own childhood, perhaps because I am now finally at an age when I can look back with fondness, rather than toe-curling embarrassment.  As I walk the streets of the town where I grew up, the past rushes back up to me.  The candy shop where I spent my weekly pocket money is still there.  I remember the delicious agony of Saturday mornings as I tried to decide what to buy – my favorites were sherbet lemons which I would suck on until the roof of my mouth was sore.  Then, much later, there were the dark winter afternoons skulking behind the trees at the back of the supermarket parking lot, anxiously puffing on my first illicit cigarettes.  With these memories comes a palpable sense of belonging.  This place feels like where I should be.  It feels, in other words, like home.

My novel, A Good American, explores the complex relationship that immigrants have with the concept of home.  It tells the story of a young couple who leave Germany in 1904 and forge a new life for themselves in America.  There is a paradox inherent in the immigrant experience: you want to embrace your new country, but you don’t want to forget where you came from.  Living with both ideas can be a delicate balancing act.  To examine this, I performed a weird act of authorial schizophrenia, and split myself down the middle.  I attributed all of my positive emotions about moving to America to Frederick, the young husband, who embraces his newly adopted country with unwavering fervor.  In contrast, his wife struggles with homesickness, and is forever looking forlornly back across the Atlantic.  Seeing this contrast play out across the pages of my novel helped me come to terms with my own bifurcated existence.  And it was considerably cheaper than therapy.

Even now, having lived here for almost a decade, I am confronted by daily reminders that this is not the country I grew up in.  There remains a vast cultural chasm down which I am apt to tumble at inopportune moments.  Whether it’s people’s obsession with college sports or Sean Hannity, there are things that I guess I’ll just never understand.  When confronted by these, I often feel an outsider all over again, and am ambushed by homesickness.

A life lived elsewhere is full of such conundrums.  My daily life is in America, with my children, but my roots will always be in England.  Such is the bittersweet paradox of immigrant life.  And so, for me, home is an amorphous thing, shifting and mutating from one day to the next.  There’s no place like it.

Must read this. Alex George describes the homesickness for England so well, and something that, as I get older, seems to echo all the more strongly within me. I love living here in California, surrounded by family and friends, but something in my heart that I never fully acknowledged of my childhood in London and the English countryside simply demands that I pay attention and say yes, I sorely miss being where my memories were forged.

I hear you! I have lived in America for thirty years, but I was born in England. I always thought I had the choice to return, but that choice was removed when I had children who have known no other home but Texas. I guess I shall always be bifurcated. Sometimes I do wonder how my life would have been if I had remained in UK.

Something of that feeling comes over me, even though I did not "emigrate" from another country, but another part of this country. I came to the Midwest from the East Coast, and in many ways the two are like foreign countries at times! While I made my peace with my decision over 25 years ago--and have a home in each place, so to speak--sometimes I have an overwhelming wistfulness for the place where I grew up.