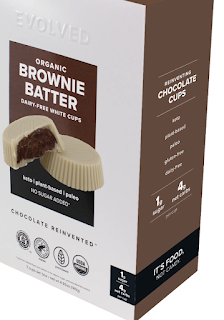 Yep, yep. I am mostly vegan. I have been a vegetarian since I was in my twenties—and for a simple reason. My first husband was a vegetarian and he did all the cooking, and by the time I was booted out of the marriage and had my first steak in a decade (I’ll show him, I thought), it made me physically ill.  Of course, I became more and more interested in diet and food, and now, my second husband and I are more vegan than vegetarian.

And we LOVE chocolate.

I became addicted to this chocolate, Eating Evolved Chocolate + Protein, and bought a box because, a. I love chocolate, and b. the box had ten grams of protein in just two little bites, and c. it was lo-cal and made with all sorts of delicious organic ingredients. And almost no sodium at all. All are soy-free, dairy-free, refined sugar-free and gluten-free, too. Best of all they were delicious.

Of course, they were quickly out of stock and I couldn’t find them anywhere. So I wrote the company, which immediate sent me out three packages for free! Dark Chocolate and Hazelnut, White Macadamia and Chocolate, and Dark Chocolate and Quinoa.

BUT there are some issues, my fault for not looking closer. I misread and thought the chocolates were ALL vegan, but only the Dark Chocolate and Quinoa ones are, along with some other products, including the Brownie Batter Bites pictured above, which will be available in November. The others have "grass fed collagen," which is a protein that comes from the bones of cows. But that isn’t a deal-breaker for me as far as the chocolate, because the Dark Chocolate and Quinoa ones are delicious and don't have collagen—and besides that, there are tons of people who won’t mind the collagen.

I was also a little worried about the saturated fat, but then I did some research. The chocolates have 8 grams of saturated fat per serving. You aren’t supposed to have more than 13 grams to protect your heart, so not a deal-breaker, here, either.

So I like this company a lot because they are sincerely interested in a better chocolate—and the box of Dark Chocolate and Quinoa is nearly finished! And of course I am going to order the Brownie Batter Bites.

Next up, I am test driving this extraordinary vegan cheese we had at ColettaNYC, a brilliantly inventive vegan restaurant in Manhattan. Because CHEESE.