Meredith Maran talks about Why We Write, odious genre labels, and so much more 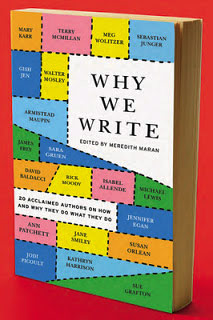 You know the friend you can sit across a table from in a cafe for lunch, and the next thing you know it's dinner time and you've been laughing so hard that you haven't even touched your chocolate croissant? That's what being with Meredith Maran is like. I love Meredith. You've never met anyone as warm, interesting, and downright funny, plus she's one of the most big-hearted and generous people on the planet. The author of eleven nonfiction books and a novel, A Theory of Small Earthquakes, and she's a member of the National Book Critics Circle, Meredith writes features, essays, and book reviews for People, Salon, The San Francisco Chronicle, The Boston Globe, The Chicago Tribune, Self, Real Simple, Ladies Home Journal, Mother Jones, Family Circle, and More.

Why We Write isn't just fascinating, it's also really important. And I'm thrilled, honored and jazzed to have Meredith here. And yep, Meredith, I DID include your answer to the last question!

How did this book come to be?

I conceived it in 2010 when the "Chick Lit" battle was raging. On the Twittersphere, on book blogs, at literary events, and in the pages of the few remaining newspaper book review sections, the book world was hotly debating the meaning of "commercial" versus "literary" fiction. Bestselling authors Jennifer Weiner and Jodi Picoult argued that their work was disparaged as "chick lit," while equally accessible, popular novels by men like Jonathan Franzen were considered "literature." Commenting on The New York Times’ reviewing policies, Weiner told the Huffington Post: “How can anyone claim the paper plays fair when genre fiction that men read gets reviewed but genre fiction that women read doesn’t exist on the paper’s review pages?"

I thought the whole conundrum was ridiculous, and not at all helpful to the biggest struggle facing writers and readers, which is--not to put too fine a point on it--keeping books and writers alive. I had a feeling that the motivations of writers across genres had more in common than the style of work they produced, and that putting them between the covers of a single book might start a conversation among them, and among their readers. So I decided to ask a bunch of them the same ten questions about their relationship to their writing. Sure enough! David Baldacci and Rick Moody write for essentially the same reasons.

Oh--also, I needed the money to fund the writing of my second novel.

How'd you choose the writers you chose?

I had a few criteria: I wanted the writers I chose to be "famous," at least to their own audiences (I'd never heard of some of the best-selling authors in the book until I started putting it together). I wanted them to be identified as either literary or commercial. And I wanted them to be representative (unlike the NYTBR) of the writers working today: male, female, white, of color, young, old, novelists, journalists. Then I started with some of my favorite writers, most but not all of whom are considered "literary," and then tried to match each one with a writer who was, or was considered to be, his or her opposite--"commercial."

What surprised you about their pieces?

Almost everything! Overall, I was surprised by the similarities in their relationships to their writing. Nearly all of them defined their need to write as one of maintaining sanity. I was surprised, too, by their differences--mostly in the funny, odd, quirky things they do to prepare themselves to write, to write, and to recover from writing. Also, I was surprised by their openness and honesty. In a really poignant, candid moment, Jennifer Egan described the night she decided her first novel was terrible, and she'd never be a writer, and she went mad wandering the streets of the Lower East Side calling friends and telling them never to call her a writer again.

Did you see any themes emerging, similarities and definite differences?

Although by definition, all the writers in the book are commercially successful, I was surprised by how many of them have struggled to be published; how late in life several of them came to writing, and how hard they've fought to keep from being categorized. Walter Mosley comes to mind. He fought being boxed in as a genre writer, just as Jodi Picoult resents being called a writer of "chick lit."

Why do you write?

Same reason as the writers in the book: I'd go nuts if I didn't. And I do go nuts when I don't. I was a full-time writer for 25 years, during which time I woke up happy to go to work every single day--and went to sleep worried about money pretty much every night. Thanks to the changes in the publishing industry--lower advances, lower sales, years instead of months between selling a book to a publisher--I took my first full-time job at age 60. Luckily, I love the gig, but it's been a huge adjustment, finding time to write--not to mention getting dressed in the morning.

If you could choose three pearls from the collection that would be especially helplful to writers, what would they be?

Meg Wolitzer compares writing to a bouillon cube. She says the key to great writing is to pick ordinary moments and magnify them, so the reader can add water. I adore her work, so I wasn't surprised to adore what she has to say in this book.

Terry McMillan says she only writes about characters who disturb her, so she has something to discover about them, and so the characters have to win her over. I loved that! She also taught me a trick I immediately put to use in my own novel. When she's starting her character profiles, she goes to McDonald's, picks up a bunch of employment applications, and fills one out for each character she's creating. Genius!

Relief that Mitt Romney isn't President. My new in-sink dish drainer, which allows me to throw dinner parties in my new bungalow in Los Angeles. Wondering when and how I'll find time to finish my next novel. Eagerly awaiting some pretty cool events to promote Why We Write, with some pretty cool writers.

Oh, my dear Caroline, you are so mortified so much of the time, always unnecessarily, that I refuse to contribute to it. You're a beautiful writer and a beautiful writing ally and a beautiful human being, and if you don't include this answer I'll know it and I'll out you on Twitter AND Facebook! Love you!

As usual, Caroline, I've enjoyed another one of your interviews! So no mortification can be had there :)

So, bouillon cubes, disturbing characters, and MacDonald's...got it.

This book will be on my nightstand!

Thank you Meredith and Caroline!

Another great interview, Caroline, with another wonderful writer. Jotted down names of authors I'd not heard of and will check those out ~ including Meredith since I want to know more of what she has to say. Chuckled over her response to your final question and she was right on with the answer. I love you too ~ quirks n all.

Such spy ware can work remotely on you device and reveal information on the device to a secret control center located remotely at any part of the world [url=http://www.tiffanyjewelryonsale.com/]tiffany outlet online[/url]
Amazon and eBay represent two great places to get deals that are 20-30% less than what most high street retailers can offer [url=http://www.2013tomsshoes-outlet.com/]toms shoes sale[/url]
However, if you want to become a web designer or developer, there is a complete guide on how can you proceed to the next level [url=http://www.louboutinshoes2013sale.co.uk/]christian louboutin[/url]
Regardless of your space limitations, Princeton products have a size and configuration for you [url=http://www.thomassaboonlineoutlet.co.uk/]thomas sabo uk[/url]
People that sell items at boot sales may have owned them for many years [url=http://www.2013tomsonsale.com/]toms shoes sale[/url]