Luanne Rice Talks about The Lemon Orchard, being drawn to places, changing the brain's wiring, and so much more 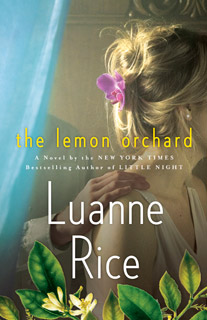 Every time writers get together, we end up talking about other writers we love--and Luanne Rice's name keeps coming up in the conversations. The author of 31 novels, including 22 consecutive New York Times bestsellers, she's had her work turned into plays, movies and mini-series. Her new novel, The Lemon Orchard is about compassion, love, and the way we can navigate our way through pain. I'm thrilled to have Luanne here, and Luanne--coffee in Chelsea is on me! And we need to have pie, too.


You are the beloved and acclaimed author of 31 novels, which makes me breathless just to write that. Did you always know you were going to be a writer? (I want to reference your great essay in What My Mother Gave Me (Algonquin). What's your writing life like? And how has it changed through the years?

Beloved!  Thank you.  I’ve always wanted to be a writer.  The desire began when I was young, and probably in an unconscious way—I preferred to live in stories than real life.  I read constantly, in a sliver of light from the hallway after bedtime, and regularly missed over half the school year from first grade through twelfth. My family was complicated, and I was afraid that if I wasn’t home it would fall apart. I read and wrote while home from school, and kept my ears open for signals of what was going on in our family; I’d sit upstairs and write stories in which everything turned out well and happily.  Family troubles have always pierced my heart and therefore inspired me, and that has old roots.

My mother encouraged my writing.  She wrote herself—she had a play produced while in college, short stories published in the Saturday Evening Post and the American Magazine, and after she had three daughters wrote into the night after she’d put us to bed.  The sound of her typewriter was our lullaby.  When I was eleven she sent a poem of mine to The Hartford Courant, and it was published in the poetry column.  Somehow that gave me the idea that all one had to do was write something and it would appear in print.

Years later, when I dropped out of college to write I realized how hard it was to get published.  The stack of rejected short stories grew tall on my desk—I’d get really nice notes from Mimi Jones at Redbook and initialed rejection slips from The New Yorker saying, “Try us again.” My first acceptance was by Ascent, the literary magazine at the University of Illinois, edited by Dan Curley.  He was so kind and generous.

My writing life is very solitary, an excuse to be a hermit.  I get up early and have a talismanic need to be at my desk before speaking out loud.  I write till I’m hungry, take a break, sometimes take a walk, then get back to work.  I use my dreams, terrors, obsessions, and loves as material.  Often my writing revolves around family or ruined love.  My main character is usually a woman about my own age although any resemblance to anyone alive or dead is purely a coincidence.

The Lemon Orchard explores how we can and should connect through pain--and it does it in a very beautiful way. Can you talk a bit about that, please?

The Lemon Orchard is set in Malibu California, where I moved after living over half a century in the northeast.  I can’t adequately explain it, even to myself.  Sometimes I panic over the whole thing.  My whole family is back east.  I still think of myself as a New Yorker—I’ve had a place in Chelsea forever and I love New York.  Most of my best friends are there.  But I always crave nature and the ocean, and I have a Buddhist respect for detachment, so maybe it was time to leave everything that was familiar and move to a new ocean and write about something new.
Place figures so predominately in The Lemon Orchard. Are you yourself drawn to certain places, and if so, why?

I am so drawn to places.  Settings in fiction make me want to visit—this goes back forever.  My family took us to Chincoteague and Assateague on my fourth grade spring vacation, because of loving Misty and the Marguerite Henry novels so much.  I lived in Paris for two years and still seek out novels that evoke that city for me.  My grandparents had a beach cottage on the Connecticut shoreline, and my imagination gets pulled back there over and over. Malibu is interesting—I think many people imagine it as Celebrity-Central, glitzy and fancy.  A lot of actors do live here, but what draws me, and fuels The Lemon Orchard, is the wilderness and extraordinary natural beauty.  Malibu sits at the edge of the continent, bounded by the Santa Monica Mountains and the Pacific Ocean.  Driving along Mulholland Highway you see vineyards and canyons, and you might think you’re in Italy.  I have one very old lemon tree in my yard, so that inspired an entire orchard.  Hawks ride the canyon thermals, owls hunt the hillside at night, and during the spring California Gray Whale migration, I can stand at the edge of my yard and see mothers and calves swimming north.

Your work has been made into movies, plays and mini-series. Do you think one form is better for a novel than the other? Have you been happy with all of the translations of your works into other forms, or do you feel it's always a slightly different work?

I feel very lucky to have had TV movies made from my work.  Once I write something, it’s out in the world, and if the story becomes a movie, then it becomes something entirely different—in each case the script was written by a screenwriter, not me.  I’ve enjoyed the process, and love visiting the sets, getting to know the writers, producers, directors, and cast.  Some of them have become good friends.   I sometimes have holidays with the family of an actor who appeared in one of the movies.
I love the theater.  When I was nineteen, my mentor was Brendan Gill, then the drama critic of The New Yorker.   Like me he was a Connecticut transplant to New York, and he gave me two very good bits of advice: go to Central Park for nature, and see as many plays as possible.  I was a starving writer, and he was very generous with tickets.  Since then I’ve had a passion for theater and was so thrilled to have a monologue in Motherhood Out Loud, a play that’s been performed off-Broadway, at the Geffen Playhouse in LA, and at regional theaters.
You have a reputation of being one of the kindest writers around.

Wow, thank you.  I love my readers and my writer friends, so that makes it easy.

Oh, my obsessions.  Sisters, best friends, family, secrets, owls, protecting the environment, Mexico, immigration as a human rights issue.  The Lemon Orchard was inspired by my friendship with an undocumented worker from a small village outside Puebla, Mexico.  I’m also obsessed with a book called Mindsight, by Dr. Daniel Siegel.  He is a psychiatrist at UCLA and writes about awareness and mindfulness, how one can work with one’s own internal world to change the brain’s wiring.  It’s shockingly wonderful, and very helpful in terms of depression and healing trauma.

What question did I forget to ask that I should have?

Just, “when are we having coffee?”
Posted by Caroline at 6:07 PM

What a lovely write up! I always find it interesting to hear what makes other writers tick. Looking forward to reading this book!
Pam in Janesville Cali