Larry Rossman talks about The New York Yankees (then and Now). yankee legends, the Nike Fuel band and more! 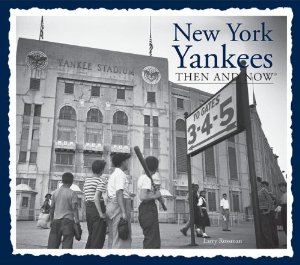 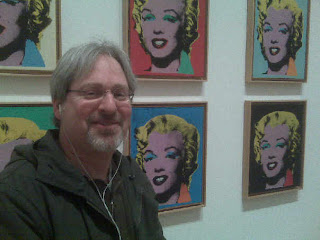 OK, the truth is that Larry Rossman and his wife Amy are two of our greatest friends. Larry and his jewelry- designer-wife Amy have known my husband Jeff since they were all teenagers. But Larry's also an author and I'm honored to host him here on my blog today, to talk about his book The New York Yankees (Then and Now), which is not only fascinating, it's also a gorgeous, gorgeous book. Just take a look at the cover! Thanks so much, Larry!

I've been following the Yankess since I was a kid. I always loved learning  about the players and the history of the team. Writing this book was the perfect opportunity to put all the information I had in my head about the Yankees to good use.

So, would you have written a book about the Mets? And does one have to be a Yankees fan to love your book?

I would absolutely have done it if it was the Mets.  I am a Yankee fan first but I am also a NY sports fan.
One does not  have to be a diehard fan to appreciate this book. It is an engrossing pictorial  depicting the history of Yankee baseball. The pictures are beautiful to look at and the stories are interesting for their sports as well as their historical and cultural content. Even Red Sox fans would like it.

Let's be frank. What part did the Nike Fuel Band play in the writing?

Did anything drive you crazy about writing the book?

There was nothing I hated about this project. It was really a labor of love. Working on the book brought back memories of my youth in the 60's. Collecting baseball cards, watching games on the black & white TV, and seeing the GREEN  field for the very first time when my father took me to my first Yankee game. I loved going through the photos - old and new. Reliving the history of the players and the franchise was nostalgic.

So what's next?
My options are open. I would love to do a "Where Are They Now" book about  the Yankees and a book on 1960's NY radio.

What don't I obsess over!!
My obsessions in no particular order are:
1- Yankees- my favorite sports team since I was a kid.
2- Baseball- the most relaxing sport to watch.
3- Tennis- love to play it.
4- Rock & Roll Music from the 60's- I am still living in the 60's.
5- Music-All Genres- It's always in my head.
6- Collecting Cd's- Can't  explain it. Just gotta have them.
7-  My dog Molly- for her unconditional love.
8- Nike Fuel Band- makes me feel like I accomplished something every day.
9- Health- Isn't everybody obsessed about it these days?
10- Wife & kids- of course.

What question should I have asked?

What Baseball Books Do I Recommend?

Did I Ever Meet Any Of the great Yankee Legends?: