Brandon W. Jones talks about All Woman and Springtime, being a major success as a debut author, North Korea, men writing about women, obsessions and so much more 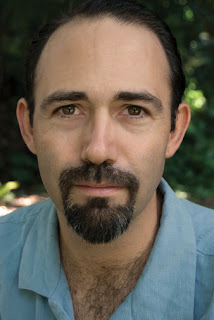 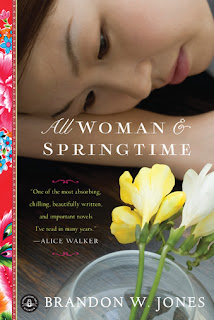 I do my best to read all the novels that my publisher Algonquin puts out, and for two weeks, I was so obsessed with Brandon W. Jones's All Woman and Springtime​, that I carried it with me everywhere. About human trafficking and North Korea, All Woman and Springtime's been lauded by Alice Walker, who called the book, "One of the most absorbing, chilling, beautifully written and important novels I've read in many years." I'm so thrilled, jazzed and honored to have Brandon here. (He's also hilarious.) Thank you, Brandon!

You have the career writers dream of! Fresh out of the gate with a debut that lands at Algonquin and racks up the raves. So were there ever any moments of doubt?

I’m still a little in shock about the whole thing, really. In every way this has been a huge personal success, and I’m grateful.  There were, and continue to be, moments of doubt.  I wrote the novel during a difficult and tenuous time in my life, unemployed in the middle of a global financial meltdown, and undertaking a first novel through it was seemingly the most illogical choice; but I was driven.  As for being published, I was painfully aware of the odds.  So at times I wrote desperately, plagued by fear that my writing wasn’t good enough, and by a looming sense of possible, even likely failure.  The only people I told that I was writing a novel were my wife and two very close friends, who were my fearless champions,  and it wasn’t until I had a serious offer for publishing on the table that I told my parents and other acquaintances.  I had enough doubt of my own that I didn’t want to field anyone else’s—that could have been crushing.  Ultimately it was my belief that I was working on something truly worthwhile that kept me going through the doubt, and keeps me going today.

What sparked the idea for All Woman and Springtime? What surprised you during the writing? What was the researching like?

It started with a fascination with North Korea and wanting to educate myself about the politics of the region after it was branded a part of an “Axis of Evil.”  At some point I realized that what was missing from the dialogue about North Korea was the human side of it, as if the only reality in that country was the political one.  At the time there were no books like Barbara Demick’s Nothing to Envy and Blaine Harden’s Escape from Camp 14.  Writing the novel was partly about me processing everything I was learning about the weird and atrocious conditions in North Korea, and wanting to share my findings with a bigger audience.

I was surprised often while writing the story, first by the reality of North Korea, then by my realization of just how huge the global industry of human trafficking is.  Then in the writing of it, my characters surprised me every day with their insights, the things they did and said.  It was especially surprising to look through the eyes of the perpetrators in the story to see how they justified their actions to themselves.  If people tend to place themselves in the hero role of their own personal stories, then what kind of mental gymnastics must human traffickers perform to maintain their self-as-hero mythology?  Asking those types of questions led to surprising answers.

Research on North Korea proved difficult, being that it is the most secretive country on Earth, and I proceeded at first with little more than a library card, a Netflix subscription and an Internet connection.  I was able to talk with a couple of people with firsthand knowledge of North Korea, which proved helpful.  I even went to South Korean chat rooms on the Internet to try to engage Koreans in discussions on North Korea.  It turns out that people going to such chat rooms aren’t looking for heady political conversation, but I did find a few people willing to give me their opinions.  Even the most scholarly works on North Korea usually cop to some amount of conjecture.

This was your debut (and what a knockout!) Did you have worries and fears about it? Does it make writing your next novel more difficult or easier? And why?

I was a complete wreck for weeks before my novel released.  There is so much hope and anticipation wrapped up in publishing a book, as well as the culmination of years of hard work and a certain amount of baring of the soul.  It is a vulnerable place to be, and how a novel lands in the literary world—with a thud or a splash or with no sound at all—has ramifications, so the pressure is on.  And it is a unique kind of anxiety, because the work passes a point of no return.  You can’t take it back, and what was at one time completely in your control is now completely out of it.  There is nothing to do but sit back and gnaw on your fist while it makes its entrance, and hope for the best.

In some ways, writing a first novel from obscurity, uncontracted and without any expectation from a publisher or an audience, felt freer than writing the second.  While writing the first book, its potential disappointments were solely my own.  With a second novel there is the fear of disappointing and being rejected by my editor, or the audience I’ve built with All Woman and Springtime.  There’s the question of whether or not the next novel will live up to the first.  It gets easy to second-guess myself by comparing what I’m writing now to what came before, or to that of my peers.  It’s also tempting to override my creative impulse by trying to make something that I think will fit as a following act to my debut rather than writing on the cutting edge of my inspiration.  A first novel is unfettered by all that.  That said, I have a clear sense of how I can improve as a writer because of the first novel, and this gives me something to aim for and makes me excited to write.  There is also comfort in knowing that at the end of writing the next one, there is a great publisher ready to give it serious consideration.  So it is both harder, and easier.  The trick is to focus only on the work and be true to that.

What's your writing life (and regular life) like now?

I try to write every day.  Very early morning is always the best time for it, but I can’t always get myself out of bed for those quiet hours.  Any time of day will do, if I’m in the flow of a story.  I have a special chair for writing that I built myself, that hangs from the ceiling on a swivel and a spring.  I don’t write as well from a stationary chair, it turns out.  When I get stuck on my novel, I dive into short stories so I can experiment with different voices and styles, or sometimes just so I can have the sense of bringing something to completion—that feeling is maddeningly slow coming in novel length work.  Also, one of the great benefits of being a writer is that I can justify reading novels all day as part of staying current in the field.  If I can’t bring myself to write, I can usually bring myself to read, so I always feel like I am doing my “job.”  I’m not sure I have a regular life.

I’m obsessed with stories of trauma and healing.  I’m fascinated by people’s coping mechanisms and their tendencies for either creative self-destruction or creative self-reconstruction.  I’m also focused on challenging our culture’s collective beliefs about men’s incapacity to understand women.  I was shocked that what seemed to surprise readers most about All Woman and Springtime was how I wrote convincingly about and from the perspective of women—as if by living among and relating with women my whole life, as any man with a mother, sisters, female friends and/or lovers has, shouldn’t be expected to be able to realistically approximate a female experience.  I think we’re less shocked when women write well about men.  By assuming that men can’t understand women, we end up excusing, and even sanctioning their ignorance of women, and thereby excusing and sanctioning their actions against them.  Look at the Steubenville rape case in which a female news reporter so quickly turned to pity for the ruined career opportunities for the rapists while downplaying the trauma to the young woman who now has to heal from those boys’ “mistake.”  She seemed willing to excuse their behavior, even blaming it on alcohol, as if the consequence was somehow unfair, as if it were somehow not really their fault; after all, we know how men are, right?  Many young men grow up assuming they don’t have to understand women, and there is little social pressure for them to even try. I believe this is cultural learning, not an inherent flaw in men. Those young men in Steubenville raped because on some level they believed it was okay, and because nobody had persuasively encouraged them to see the world through a woman’s eyes.  If they had had a developed sense of empathy, there is no way they could have done what they did.  This line of thinking, the desire to inspire empathy, drives my writing impulse.