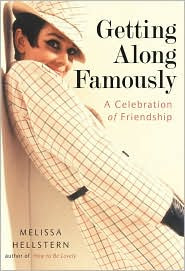 Getting Along Famously by Melissa Hellstern is the kind of book you want to give to all your best friends.  I raved about it for Dame

and I peppered Melissa with questions, which are below.

1. What led you to write a book about friendship and what made you decide on the friendship pairs that you did?

When I went through a particularly rough patch a few years ago, I really came to appreciate the joy, laughter and moral support that my girlfriends provided.  While I had always felt my friendships were important, it occurred to me that as we get older with more responsibilities – husbands, homes, children, jobs – that we might need to be reminded to take a little time out to stay in touch with those we hold dear.  So, the idea was to create a way to honor the wonderful women we hold dear – and the book was born.

When I was researching my last book, How to be Lovely:  The Audrey Hepburn Way of Life, I learned a bit about Audrey’s friendship with Sophia Loren.  From there, I researched who was friends with who.  Also, I tried to choose relationships that represent the various types of friendships we all encounter.  For example, Lucy Ball and Vivian Vance as co-workers, Katharine Hepburn as a mentor to Lauren Bacall and Carrie Fisher and Debbie Reynolds as a mother/daughter friendship.  There were some friendships that perhaps did not have enough information to become a chapter and so you can find them as smaller stories throughout the book.

2. What surprised you about these friendships? (I know I was surprised by the depth of Carrie Fisher and Debbie Reynold's relationship.)

Overall, I would say I was surprised at how normal these friendships were.  Certainly, these were women who led extraordinary, public lives – and yet privately, I think they looked for the same things in a friendship that we all do – companionship, compassion and laughter.    They rallied together in times of tragedy and celebrated together when the time was right.  They gave each other professional and personal advice.

Carrie Fisher and Debbie Reynolds are a very interesting pair – not only because they are both fascinating and seasoned women, but also because they have managed to go through so much together and still keep laughing.  There is something especially beautiful about family members who become friends.

3. Were there any famous friendships you didn't include that you wished that you had?

I wish I could have known more about the friendship between Vivien Leigh and Katharine Hepburn, but both were fairly private about each other.  I also considered including a chapter about Bette Davis and Joan Crawford – perhaps the ultimate frenemies.  There are some ridiculous and amazing stories there!  They worked hard at getting under each other’s skin.  But in the end, the book was a celebration of friendship, and so I decided to leave them out.

4. What do you think this book says about modern day friendships, in relationship to some of these very classy, vintage ones?

Perhaps it comments on the fact that no matter what the social culture, era or lifestyle, female friendships don’t change all that much.  For me, this is a very reassuring fact.  We need each other and often for the same reasons our grandmothers and great-grandmothers needed their friends.

I am working on a few ideas.  Writing Getting Along Famously, I was fascinated to learn that Lucille Ball became not only the first female head of a studio, but also the largest studio in Hollywood at the time.  She made landmark shows like Mission: Impossible and Star Trek possible.  And so I have been looking into what other female firsts might be worth learning about.

6. Was there a question I should have asked that I didn't?

Nothing comes to mind!  It was a pleasure!