The very wonderful John Searles talks about Help for the Haunted, terrifying demon dolls, his puppy Ruby, staring at the ceiling while working, and so much more 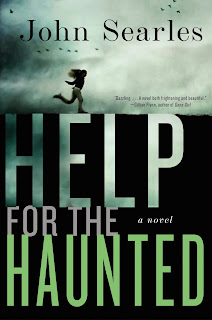 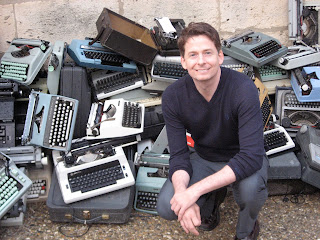 John Searles is one of those people you can't help but adore. Not only is he a fabulous writer, he's generous to other writers, he's hilariously funny,  and you're just glad he's out there in the world. Books editor at Cosmopolitan and NBC'S Today Show, he's also the author of Boy Still Missing and Strange But True, and his newest novel, Help for the Haunted is already racking up the raves (it's got starred reviews just about everywhere and is already on many Best Of lists) and justifiably so. Literate and terrifying, the novel is about Sylvie Mason and her parents, who help "haunted souls" find their peace. But the book is also about mysterious family secrets, with an ending you'll never see coming. Unsettling, scary and unforgettable, it makes you see the world differently. I'm so honored to host John here. Thank you, John!

It’s been a few years since you published your last astonishing novel, Strange But True. You seem to do just about everything on the planet, from being the books editor at Cosmopolitan and NBC’s Today Show, and writing. How do you ever find time to write--and to do it so brilliantly?

If only it were a few years since Strange But True. Recently, at lunch with my editor, I made the same comment about it being a few years and she stopped me to ask, “Do you really want to know how long it has been?” I promptly put my napkin over my head to hide then gripped the table and told her to lay it on me. Well, it’s nine years. Let me repeat: NINE YEARS since Strange But True! I almost died.

So to answer your question, the way I am able to do so many things is that I take my time. But I have accepted it. The first two books came quickly and this one came very slooooowly. What matters most is that I’m proud of the story and the way it came out.


I always want to talk about craft, so tell me how this novel sparked. Did you have it all mapped out, or do you follow your muse (mine always seems missing in action). At what point did you know how the book was going to end, and what pieces of the story to withhold for maximum drama?

Originally, I was writing a novel about a girl in her twenties who goes away to an island to take care of a reclusive mystery writer. There was so much about that novel I loved, but it just never came together. Thankfully, my literary agent had the good sense to intervene. One day, she showed up at my house with the whopping 500 pages I’d written and broke it to me that it was not working. We spent the entire day and well into the night discussing what the problems were and what, if anything, could be salvaged. In the end, the only thing I kept was the main character’s name: Sylvie Mason. I had this idea about her being orphaned and left in the care of her troubled older sister. So I started writing that story and stuck with it. I’m lucky it worked out on the second go-round!

The novel is also many things at once--a terrifying thriller, a creepy scarefest, and an astute psychological drama about the coming of age of one remarkable narrator.  How did you manage such alchemy?

Thank you for saying that. This story was way more challenging than anything I’ve ever done creatively. I guess that’s because I was trying lots of things: telling the story from the perspective of a young girl, combining a murder mystery with a ghost story with a coming of age tale and a family drama. Believe me, there were times when I’d just lay on the floor and stare at the ceiling trying to figure out how to piece everything together. When that didn’t work I’d do push-ups—I do so many of those writing this book I should probably start wearing a bra by now because my chest got so big…haha! I’d also go for crazy long runs to puzzle things out.

Help for the Haunted has one of the most cinematic openings I’ve read. Was this always the way you knew the book would start?

Well, I started Strange But True with a phone call in the middle of the night as well, so I guess I’ve hit my quota on that sort of opening. But think about it: is there anything more startling than your phone ringing late at night? It just gets your attention and cranks up your fear right away. So that’s how I saw this story beginning….and then came the snowstorm and the drive to the church. Originally, I wrote the scene with Sylvie inside the church, but I realized at some point that it was more compelling to stop at the point when she reaches the door.

The novel is both truly terrifying, undeniably creepy, and it has that DOLL, Penny.  Did you do research into the supernatural at all, and what about your research surprised (or even better, scared) you?

I read lots of books about the history of demons and spirits. It was fascinating to learn about some of the unusual things that “believers” have done in different cultures at various times. Mostly, though, I just used my imagination. I never wanted the story to cross over into the sort of fiction where suddenly people are moving objects with their minds or they sprout fangs or fly through the air. Nothing wrong with those kinds of stories but that territory seems so well-tread by now. Once things cross over into that sort of situation, things feel weirdly familiar since readers have seen so much of that in fiction. As a result, the familiarity makes it way less scary. But how much scarier to keep things grounded in reality and let the reader wonder what the hell is going on?

Right now, I am obsessed with my puppy Ruby, who arrived on my birthday this year in June. I started her own Twitter page so if people want to share my obsession check her out at @ohmygoditsruby.

How am I so handsome? Hahaha. Just kidding. No, I think you covered it all, Caroline. Thanks for having me on your blog!