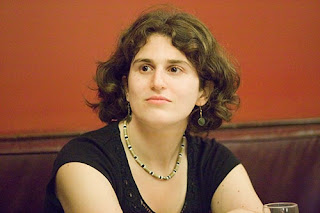 I was so honored to have the amazing Sarah Weinman interview me at McNally Jackson Books when Is This Tomorrow launched. She's smart, funny and a fabulous writer. The News Editor for Publishers Marketplace, she contributes a monthly crime fiction column to the Los Angeles Times and a monthly Q&A with authors on personal finance for Currency. Her work has appeared in the Wall Street Journal, The Washington Post, The Daily Beast, Maclean's, the Guardian, and more. Her writing has appeared in Dublin Noir, Baltimore Noir, Damn Near Dead, A Hell of a Woman, and more. She also has a M.S. degree in Forensic Science, and her under-rennovation blog, Confessions of an Idiosyncratic Mind was mention just about everywhere, including the  New York Times, the Wall Street Journal, the Los Angeles Times, the Boston Globe, the Christian Science Monitor, the Pittsburgh Tribune-Review, the Ottawa Citizen, Library Journal and the India Times Business-Standard. Troubled Daughters, Twisted Wives (was there ever a better title?) reintroduces astonishing women suspense and crime writers we may have forgotten (and shouldn't have).

What was the moment that sparked this book?

I'm not sure there was a specific moment, but the anthology could not have happened if I hadn't written an essay for Tin House for their Spring 2011 issue that first outlined my whole idea of domestic suspense and this lost generation of largely women writers. I knew, as I was working on it, that I had a lot more to say, and when I ended up having lunch with the editor who ended up acquiring TROUBLED DAUGHTERS and talking at some length and passion about this void, he suggested there might be an anthology in this. And so there was!

Tell us how these writers were so pioneering?  And what can modern mystery writers (both men and women) learn from them?

Crime fiction is customarily thought of as having two distinct paths: the hardboiled/noir path (Chandler/Hammett/Cain, then Thompson/Macdonald/McDonald/Spillane, etc) and the Golden Age/cozy path (Christie/Allingham/Sayers/Marsh, etc.) But there was this whole group of writers -- almost all of them women -- who won awards, were critically acclaimed, published and sold well in hardcover, that were dealing with more domestic themes. Subtle terrors. Family matters, toxic marriages, crumbling relationships, social issues. And they never got their critical due in the same way their male counterparts did.

In terms of what modern mystery writers can learn, it's that the current crop of domestic suspense -- Gillian Flynn's GONE GIRL being the most famous example -- had precedent and antecedent. The same anxieties afflicting us today were around 50,60,70 years ago. We still grapple with a lot of the same issues.

I love that so many of the stories deal with the darker side of human nature. Do you think that part of why some of these writers were not as famous as they deserved to be was because people felt women shouldn’t concern themselves with such shocking matters? And what price did some of these writers pay for venturing outside what society expected of them?

I think there's something to that, but it's also about who got to anoint which books. Taste is subjective, and those in a position to canonize writers after a fashion, whether by reissuing their work with an influential imprint like Black Lizard or republishing and present books as important a la the Library of America, go by their own likes and dislikes.

How did you go about choosing the stories in this book?

I went in knowing some of the writers I wanted to include, people like Charlotte Armstrong, Dorothy B. Hughes, Margaret Millar, Dorothy Salisbury Davis, Elisabeth Sanxay Holding, Celia Fremlin (as those two were part of my Tin House essay) and Vera Caspary. I also wanted that first short story by Patricia Highsmith, and hoped something by Shirley Jackson would suit, which it did. Then I discovered other writers who fit the bill, like Helen Nielsen, Joyce Harrington, Miriam Allen deFord, Nedra Tyre, and last but not least, Barbara Callahan. I wanted a mix of well-known writers, those who were well-known in their time but had faded from view, and undiscovered treasures.

Picking the actual stories involved a lot of detective work. Hours and hours online scouring directories for titles, even PDFs. Several hours at the NYPL (where I found the Holding story, buried in a bound edition of its first magazine printing) the Center for Fiction (where I found the Callahan and the Fremlin) and Partners & Crime, the late great Greenwich Village mystery bookshop, which had a stash of old Ellery Queen Mystery Magazines that provided a wealth of source material for TROUBLED DAUGHTERS. Then requesting permissions, which is a whole other story. Then figuring out the order, again mixing known and well-known, and loosely going by the age of the protagonist.

Well I'm still pretty deep into everything related to TROUBLED DAUGHTERS! But also, the source material for one of my next projects (fiction) which I am superstitious and thus must keep quiet about.

Maybe this: what sort of conversation do I hope will start because of TROUBLED DAUGHTERS? And it's that if the anthology spurs readers to search out, buy, read, and love any or all of the authors included, I have done my job, several times over. As I write this the book has been out a week and I've been amazed and overwhelmed by the response.
Posted by Caroline at 9:00 AM