Rochelle Jewel Shapiro talks about I Dare You to Write, mistakes new writers make, Kaylee's Ghost, and so much more 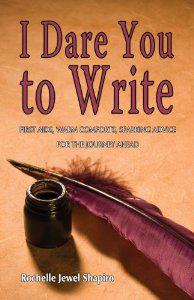 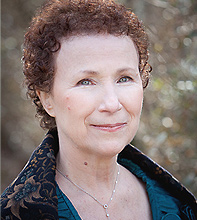 I've know Rochelle Jewel Shapiro for a million years. We switch pages, we share secrets, and no one is more fun to go shopping with. Her  first novel, Miriam the Medium (Simon & Schuster) was nominated for the Harold U. Ribelow Award and published in the U.K., and Belgium and Holland as Miriam Het Medium. Her new novel, Kaylee’s Ghost (Amazon and Nook) was finalist in the Indie 2013 Awards. Shapiro teaches writing at UCLA Extension and like her character, Miriam Kaminsky, she is a phone psychic. Articles have been written about her psychic gift in Redbook, The Jerusalem Post, the Dutch Magazine, TV GID, and the Long Island section of the New York Times. She’s chronicled her own psychic experiences in Newsweek (My Turn), and The New York Times (Lives) which can be read on her website at http://rochellejewelshapiro.com.

Why write a book about writing? How is this book different from other books on writing?

I had no idea that I was going to write a book on writing. A few years ago, I began writing a monthly column on writing for Authorlink.com, a website that connects writers, editors, agents, and readers. With each column, I explored issues that I was either having in my own writing, or curious about, or thought that my writing students would benefit from. Instead of tiring of it, each article became more interesting to me. I’d walk around thinking about what I would be writing next. When Authorlink.com morphed into a small publishing company, Doris Booth, the editor, said, “Hey, why don’t we publish fifty of your most exciting essays into a book?” I looked them over and fifty leaped out at me. Even after I had read the proofs until my eyes felt like joke eyes, popping out of their sockets on springs, I remained interested in the material and bet the reader will be too.

How this book is different from others on writing is that I drew from all kinds of sources. Since I’m a psychic, I have a chapter called, Your Intuition Knows What You Want To Write, which is actually a Ray Bradbury quote. Because I’ve taken acting classes, I have a chapter Writing as an Actor, and another on Writing as if You’re Auditioning for the Reader. I don’t snub genre writing. In my chapter, Fifty Shades of Shocking Pink, I tell you all I’ve learned about writing erotica. But I also go to the masters as I do in my chapter What Papa Hemmingway Still has to Teach Us. I DARE YOU TO WRITE is both comprehensive and quirky.

What mistakes do you think new writers (and old ones) make?
I think too often writers are pressured to think, What will sell? Then they go after that, even if it doesn’t fit their psyches. Believe me, I know. I had an agent who wanted me to write a book about being a dog psychic because she was sure it would sell, never mind that although I am psychic and a dog may wuff into a reading but, I would not bill myself as an animal psychic, which is a specialty. Needless to say she is my former agent, but you see how this can go? What you need to do to find what to write about is to go deeply into yourself, find your own themes, and when you do, you can write almost anything, and readers will eagerly read it. Ask yourself what drives you crazy? What keeps you up at night worrying? What kind of book do you always reach for? What gives you solace? What situations have shaped your own life? Who would you like to remember? Who would you like to forget? What cracks you up? You can’t just follow trends. By the time you finish the book, the trend might be over. Write what moves you, what feels crucial to you. Writing a book is a long arm wrestle. If you’re not writing from your core, you won’t be able to keep going.

Can you give us a sample from the book, a tip that writers can use?
In my essay: Cultural Clashes: Grist for the Mill, I point out that some of the greatest works of literature arise from clashes between cultures: people from different countries, socioeconomic classes, and when you think of it, each family has its own culture, a way of doing things that is unique and sometimes doesn’t mix well with another family.

Think of Jay Gatsby who came from an impoverished childhood in North Dakota and grew fabulously wealthy through bootlegging and securities fraud in order to win the love of high-society Daisy. Too late he finds out about the careless morality of the upper class. The Great Gatsby also reflected the decay of social and moral values that led to the crash of the stock market, and has relevance today. When your characters are from different socioeconomic backgrounds, even if you aren’t trying, you will have social commentary, which will make your story larger than the plot.

Think of Shaw’s Pygmalian, where a Professor of phonetics, Henry Higgins, makes a bet that he can train Eliza Doolittle, a bedraggled girl who sells flowers, to pass for a duchess at an ambassador’s garden party by teaching her to assume an air of gentility by teaching her manners and most of all, elocution. As Higgins tries to get her to nix the cockney accent, the play not only turns out to be a hilarious love story, but also a satire on the rigid British class system that existed back then.

D.H. Lawrence also created the clash of different backgrounds in his daring, sexually explicit, Lady Chatterly’s Lover, the hot affair between Constance (Connie) Chatterly, the wife of a minor nobleman, and Oliver Mellors, the gamekeeper on the estate. We learn from other characters that Lady’s Chatterly’s lover had been a commissioned officer and had had a good education as a child, something rare for the working class back then. But he chose to speak with the broad Devonshire accent and work with his hands to fit into his community. Unlike Jay Gatsby, we find out that Mellors is a man of true nobility despite the station that the world sees him in.
The differences in the backgrounds of the characters are the heart of Tennessee Williams,’ A Street Car Named Desire. When Blanche DuBois, the “fallen” woman puts on airs, turning her nose up at Stanley Kowalski, her sister’s brutal blue collar husband, they strip each other of their pretensions. Stella, Stanley’s wife, has married beneath her station, and has to witness her sister’s final ruin and decide whether or not to forgive her husband for causing it.
If you’re presently trying to write a novel, check to see if there are some social class differences between your most important characters. If you haven’t made those clashes, you might make your story stronger by including them. After all, strong plot is built on differences.

Legacy, the idea of legacy. No matter what age we are, we have to think about what we are going to leave behind to those we love and those we’ve never met. Each day of writing for me feels more important than the next. And it isn’t just in my writing. It’s how I greet people, how I say goodbye, how I’ve made someone else’s life better, even with a joke. By the way, did you hear the one about…..?

Why do you have to dare someone to write? Because it’s hard to justify to others and sometimes even yourself.
Ever notice how parents foist music lessons on disinterested kids, holler at them if they don’t practice, sit through tedious piano recitals, and then, if their children decide to become musicians, the parents are desperate to talk them out of it. Parents want their kids to become lawyers, dentists, accountants, so that someday their kids will be able to afford to foist music lessons on their progeny.
It’s no different with writing. Dare to become an English major and everyone is asking you, with a raised brow, “So, what are you intending to do with it?” Creative writing major? Forget it. Better to say you’re studying micro-economics (code for, I’ll be earning very little, which might be the truth.) That means you will have to figure out another job to sustain you. And what’s wrong with that? William Carlos Williams and Fyodor Dostoyevsky were both practicing physicians. Nathaniel Hawthorne was a weigher and a gouger at the Boston Custom House which housed offices to process the paperwork of imports and exports. Dan Brown, before he struck it rich with The Da Vinci Code, was a high school English teacher.
Once you commit yourself to writing, people ask you, “Have you sold your book yet?” as if it were easy and took so little time to either write it or get an agent, then get it sold to a publisher. They don’t understand that you have to hone your craft, read extensively, especially in the area in which you want to write. “They” get to you. You get to you. That’s why I need to dare yourself to write.