Therese Anne Fowler talks about her novel Z, Zelda Fitzgerald, whether Zelda would have been happier without Scott and so much more 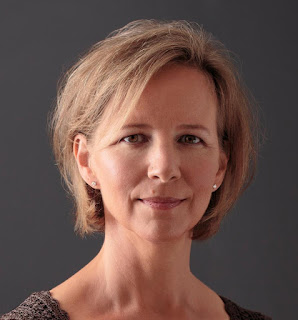 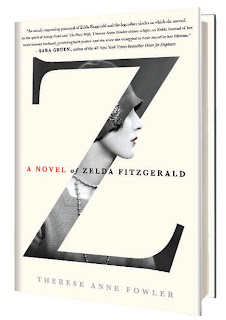 How can anyone resist Zelda Fitzgerald? Especially when she--along with the glittering world of the 20s--begins to breathe on the page courtesy of Therese Anne Fowler (Exposure). I'm thrilled and honored to host Therese here. Thank you so much, Therese!

What is it about Zelda that captures us so much today?

That’s a great question, because really, Zelda is a kind of pop culture Rorschach test. People who think they know who she is have decidedly specific views—and those views vary considerably. She is said to be: the glamorous jazz princess; the feminist first flapper; literature’s most beloved muse; F. Scott Fitzgerald’s jealous, destructive wife; victim of an abusive, domineering spouse; a thwarted dancer, artist, writer; a pathetic crazy woman who spent most of her life in asylums.

Most of the labels are imprecise at best, damaging and false at worst. Zelda was a woman who didn’t always choose wisely, but she was also bold and fearless and talented and witty and fun. She was a celebrity at a time when the term was being coined, and in the early years she loved to play the part. Later she struggled not with schizophrenia, as we know it, but with what was probably bipolar disorder.

Most interesting—and most accurate among popular beliefs: she was devoted, for good or ill, to a man whose vividness and demons and talent are as fascinating as hers.

It struck me that so much of what Zelda dealt with concerning the proper roles of women, especially married women, resonates in today's political arena. Care to comment?

Yes, it resonates all too well. It’s disheartening to see this political and cultural backslide into a mindset that forward-thinking women of Zelda’s era fought so hard to escape. Conservative ideology today looks frighteningly similar to the early twentieth century’s traditional attitudes—men and women both puzzled by any woman’s desire to achieve professional status in any field. They wonder why being someone’s wife, a homemaker, a mother, isn’t sufficiently satisfying to every single woman. Women who desire more (such people say) are clearly acting against nature’s design.

This kind of thinking fails to take into account that nature designed a wide spectrum for pretty much every human attribute, artistic ambition included. It fails to recognize that being forced into a behavioral box of any kind creates far more trouble for individuals and society than it hopes to solve.

What surprised you in the research? And what was your research like?

The biggest initial surprise: that Zelda wasn’t “insane,” as popular culture contends, nor did she spend all her final years locked away in sanitariums.

I was surprised by the thoughtfulness, clarity and wit of Zelda’s letters, essays, and short fiction. Most judgments of her writing are based on her novel Save Me the Waltz, which was written in deliberate modernist style but also done in a tremendous rush under stressful circumstances. And although Scribner’s elected to publish it, they allowed Scott to oversee revisions and it never received sufficient time or editorial oversight for it to be developed and polished into what it could have become. Scott was ambivalent about the work, and Zelda was not, at the time, in a position to assert her will.

I was surprised, too, by how conflicted Scott was about almost every facet of his life. Outwardly he was this modern, dynamic man, a prolific, popular author who’d been deemed the face of his generation, but inwardly he was quite traditional in his expectations of how his personal life should run, what a successful man’s domestic sphere should look like.

My research was a complete immersion into the time and lives of not only Scott and Zelda, but also the people whose lives affected theirs most. Biographies and autobiographies, ledgers, collections of letters and photographs and memorabilia, scholarly essays, reviews, interviews—the body of available information is vast, and filled with contradictory accounts. My challenge was never in finding enough information from which to develop their story but in culling their genuine story from this morass of information and opinion.

I really got the impression that Zelda could have been saved if she had been allowed to be an artist. The so-so reviews seem more to be a product of the times, which didn't understand her, than a true critique of her talent. Do you agree? Do you think Zelda would have been better and happier without Scott?

While Zelda did suffer from what would now likely be diagnosed as bipolar disorder (characterized by episodes of depression and episodes of manic behavior), her troubles were exacerbated and provoked by her situation, Scott’s behavior, societal attitudes, and the prevailing medical beliefs of the time. If she’d been freer to follow her interests, whether in ballet, painting, writing or anything else, I do believe she’d have had far fewer crises, and the ones she did have would’ve been less damaging.

Would Zelda have been happier without Scott? It’s an interesting question, and one that has no easy answer. There’s an argument to be made that if she hadn’t married him, she would have led a far more ordinary life as a Southern wife and mother who, without the influences of the expat life abroad, would never have been compelled to achieve anything of significance. She might have married a decent but far more ordinary man. Would that life have made her happy? It would have been more stable, certainly, but less interesting—and for Zelda, less interesting would equal unhappy.

If she’d been surer of herself when things began to unravel, she might have had the confidence and strength to leave Scott and pursue her dancing and her art. But her illness, over-treated as it was, made her insecure. She feared losing her daughter, she feared losing her mind, and beneath it all she still loved and believed in Scott.

Speaking of Scott, neither he nor Hemingway come across very favorably in the novel. In fact, for all of Scott's worship of flappers and freedom, he's very domineering towards his own daughter, urging her to be more docile. Do you think Scott knew on some level just how talented his wife was?

I think he knew, but he resisted the idea that her talent could or should be accorded real significance. At the time that Zelda’s talents were developing significantly, his weaknesses were beginning to assert themselves, and he had a lot of trouble reconciling all the stresses and conflicts and insecurities. This is the time period when his drinking became seriously problematic for both of them.

For all his flaws, I have real sympathy for him. I have less for Hemingway, but even there, you can see the insecurity at work. How it manifested in each of these men is the telling detail.

I’m so in love with and fascinated by the 1920s that I’m loathe to leave it. In many aspects, the culture and events of the ‘20s forged the modern United States; the Fitzgeralds and their circle are only one element of what made the era so significant. So I’m immersing myself again in history tomes and the literature of the time in preparation to write a new novel set in the era.

Readers may wonder why I would write fiction about real people, especially iconic people whose lives have been thoroughly chronicled by biographers and scholars. The reason is that such works, even the best of them, serve up all the factual minutiae and literary analysis one could want but can’t quite illuminate and demonstrate the subjects’ inner lives, their emotional truths, the way a novel can and indeed has to do. We enjoy learning facts about interesting people, but what really intrigues and moves us are their stories.
Posted by Caroline at 6:25 PM