Betsy Prioleau talks about Swoon: Great Seducers and Why Women Love Them, Casanova, why you might not want to find a great seducer, and more 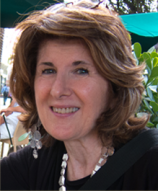 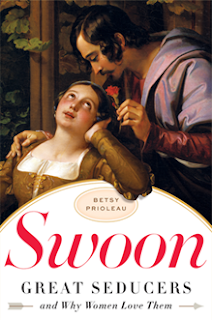 Betsy Prioleau  has written one of the most intriguing and delicious books on the planet, Swoon, which looks at the great male seducers and why we love them. She's also the author of  Circle of Eros, which is a fresh look at William Dean Howells, who contrary to belief, championed women and permissive sexuality, and Seductress, about the enchantresses of history. I'm thrilled to have Betsy here. Thank you, Betsy!

Your other book, Seductress, was about history’s sirens and now in Swoon, you target the male seducers.  So, which sex is more powerful at seduction or is it just different for each?

Seduction is simply the ability to delight and entice people, to win their confidence—and in love, to enamor them. That’s powerful in either sex.The seductive strategies of men and women are similar in many respects.  They make the most of age-old courtship charms like dress, dance, and setting, and use the same mindspells, like praise and great conversation.  And they invest these allures with artistry.
But the male approach is slightly different.  Great lovers throughout history take the mating initiative and come on strong.  Seductresses beguile and decide.  Ladies’ men also play to women’s special desires—for intimacy, romantic ardor, and full-on attention. So, seductresses and seducers wield equal power in romance; they enchant and keep others enchanted. Both employ universal love charms, but tailor them to pack the most erotic punch with the opposite sex.

Did anything surprise you in the writing of this book, especially in terms of overthrowing clichés about what makes a great seducer? (Women want someone who cares about them and understands them!)

I approached ladies’ men full of preconceptions. But after studying great lovers over time, I found that they explode all the stereotypes—those clichés of satanic sexual predators or alpha males with the most money and status and best looks.

Why do you think studying these great seducers can help both men and women in love?

Great seducers, whatever their faults, are a fabulous resource for men and women in love. Ladies’ men specialize in romantic passion (something not taught in schools), and can help couples make their unions happier and hotter.

Casanovas not only possess a cache of sophisticated amorous arts, they understand how to remain perpetual suitors and keep love fresh.  After the “catch,” they scale up physical and psychological charms and insure that romance continues with adventure, novelty, self-enrichment, and a sexy flux of intimacy and independence, concord and discord. Premier lovers, like experts in any field, are prime resources, and what could be more important than romantic love that endures and flourishes?

Which was your favorite seducer and why?

The “dashing little duke,” the eighteenth-century duc de Richelieu (not to be confused with the cardinal in The Three Musketeers), isn’t my favorite seducer, but he’s the most colorful.
A statesman, general, and confidant to Louis XV, he was also a “hero of the boudoir,” who “could ruin a woman with a smile.”  He had charm to burn—wit, vitality, conversational flair, sweetness, and a taste for fun.  He disguised himself as a nun and a peddler to rendezvous with lovers, and once tunneled into a mistress’s bedroom through the fireplace.  He received ten to twelve love letters a day, and romanced nearly every noblewoman in Paris, including two princesses. Women were wild for him.
So wild, he caused one of the greatest scandals of his day.  At one point, two court ladies decided to duel for his favors.  They arrived at the Bois de Boulogne before dawn dressed as Amazons, leveled pistols, and fired.  The marquise de Nesle toppled to the ground drenched in blood and cried, “My lover is well worth it!  Now he will be wholly mine.”  She survived, but she was to be disappointed.  The duc de Richelieu was too much in demand, too adorable, to belong wholly to anyone.

Right now I’m fascinated by Casanova, the gourmet.  He lived during one of the most formative periods of cuisine, when habits of consumption, ideas about nutrition, and cooking methods underwent radical changes.  Casanova left one of the fullest records of this revolution.  He was a great connoisseur of food, which he associated with love and desire:  “sex,” he wrote, “is like eating,” and “eating like sex,” and he described hundreds of aphrodisiacal meals in his twelve volume biography.  The stories and recipes have never been rendered in English.  So that promises to be fun.

What everyone asks:  where are these ladies’ men now; where can I meet them?  First of all, you may not want to meet them.  They can be inconstant and hard to handle.  The best course may be to take the seducers’ amorous arts and secrets and pass them onto boyfriends and husbands.

But if you insist on encountering great lovers today, they’re probably right under your nose.  They may not be the guys with the pretty faces and big titles; they’re ordinary men with that extraordinary “something”—sexual voltage, respect for women, and love skills that will enswoon you forever.
Posted by Caroline at 6:24 PM