Samuel Sattin talks about League of Somebodies, what it means to be a guy, whether he has webbed feet or not, and so much more 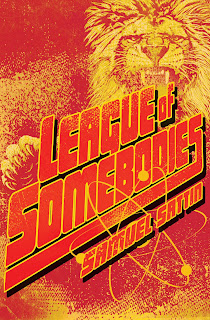 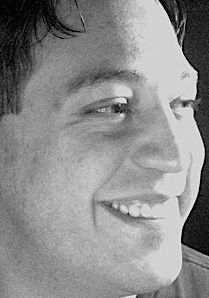 Mat Johnson, author of Pym, Incognegro and Dark Rain, calls the novel, League of Somebodies, "so rich with originality that it's actually radioactive." Cristina Garcia, author of Dreaming in Cuban calls it "a whirling force that blends the family saga, superhero lore, and a coming of age story to a frothy cocktail." Samuel Sattin is an original and I'm thrilled to have him here.

I think the superhero genre, albeit a lynch pin for my personal sanity, is dominated by male heroes, male writers, and an uncomfortable amount of female stereotypes. Of course there are risk-takers, things are changing every day and even the most basal comics have a lot of worth to them. But for the most part, the industry was built upon the shoulders of atypical men shunned either sexually or socially by society. Repressed male identity, and especially repressed male sexuality, is sublimated into the pages of most every comic book from the golden age on. At the same time, however, that sexuality is simultaneously put on absurd parade by practitioners of the genre. In the male superhero we witness a strange embrace AND refutation of traditional male roles, demonstrated by the ironic dissidence between the near-sighted, nebbish comic artist and the 6 foot tall brawny Adonis he proceeds to sketch.

Male identity itself is simply bizarre and grotesque. I grew up surrounded by veritable gorillas who saw themselves as both alpha and omega, viewing the world through a prism of command.  Comic books, if anything, allowed me to digest manhood as oblique and exaggerated as a concept. I now view male identity as patently absurd, the byproduct of preternatural insecurity. There's also a tendency towards self (and external) destruction present. I think there's a reason why color blindness is solely a male disability, anyway. Uniformity is essential to the male psyche. Difference is viewed as weak. Danger is overvalued, and exploited for maniacal purposes.

The plot is so knockout original (a dad feeding his boy Plutonium to make him a superhero) that I have to ask, where did the idea for this novel spark? It's absolutely inspired.

Thank you! I'm glad you think so. As I explain a little later, League of Somebodies started out as a completely different book. The characters were mostly there from the beginning (except for Fearghas; you can credit him for the follow-through), but I think I was afraid, or unsure of, how to carry them towards the end. I'm obsessed with comic books, science fiction, and malevolent beings, however. And I was playing with all these ideas RE origin, tradition, legacy, identity. Such traits are the warp and woof of comic world, and heroism, that idea of single human with the weight of the world on his shoulders, is epic in it narcissism, which interests me. Growing up as I did, I learned what it is to be an object of someone's design. And so this idea of the experiment emerged. The desire to turn one's son into a type of Frankenstein. It's perfectly plausible someone has already attempted to do this in real life. I wouldn't be surprised, anyway.

I loved that you carried the idea from father to son to the son of the son, which brings on this whole question of destiny. Do you believe in it? Or do you think we can create our own futures?

Hopefully this won't sound silly, but I believe in both. I think that parents, for example, often attempt to force destiny upon their children (and often for their children's own good!) You wouldn't want harm to come to a loved one, anyway. We enter the world with incredible futures, whether beautiful or terrible, and our parents are responsible for making sure we maneuver reality so that we don't end up in a ditch. But sometimes, a lot of the time, even healthy parental expectations take on too much insistence. We demand our children attain impossible heights. Or we just want them to be so much like us we'll do anything to make it so. But there are always hiccups. Things you don't expect. Sure, a father tries to raise his son to be like him. But sometimes, even if the son follows suit, he starts to wobble. He falls out of touch with who he is. And if that man ends up raising a son, the path he's been taught to follow might falter indefinitely. So in some ways, destiny and self-determination are one in the same. By attempting to make someone into one thing, he or she becomes something completely different.

What's your writing life like, particularly in relation to this wondrous novel? It was so intricately plotted, I want to know if you planned it out beforehand, a la John Irving, or if you just sort of followed your characters' leads?

As mentioned earlier, League of Somebodies was not ever itself to begin with. The book’s first title was The Ivory Flag, and it centered around a mentally unstable suburban father outside of Denver who was erecting a turret atop his Tudor home. At the end of a frenzied year of writing, however, the whole damned narrative ended up crumbling like Pompeii. I only salvaged twelve pages (one particular scene in League is exactly as when I first wrote it). But when the real writing actually began I didn't stop for 2 years. I wrote whenever I could. I wrote through my entire MFA. When I finished my MFA I applied for (and somehow got accepted to) a studio art Masters program for the loan money just so I could make sure the book got finished. In retrospect, it was a stupid, crazy thing to do. I ended up failing out after my first semester. But I knew League needed to be finished and that loan money allowed me to do so. I would have done anything for that time to write. Well, almost anything.

As for the plot, I did somewhat end up letting the characters take me for a ride. But I found myself tinkering with the controls along the way (mostly in favor of sabotage). The structure became the real key to finishing the work. Even if I had an idea of where I wanted things to go, the dimensions of the novel kept on throwing me into a tailspin. I'd take off into tangents, end up in a completely different novel. I had to find a way to connect the two generations of family without dragging on into ubiquity. Once I figured out how to fix that problem, I fell into a speedy rhythm and finished the second half of the book in two months, writing 8 to 10 hours a day. I wasn't sleeping well. It was a manic period in my life, with my mother passing away soon after its completion.

I'm into scary things. Blood, specters, unspeakable evil. Whatever frightens me, really. And hopefully what makes me laugh at the same time. I read The Devil In Silver by Victor LaValle, and was taken by the untapped wealth of the horror genre, how it might be appropriated in an interesting fashion. I've taken up frightening Japanese comics and American horror novels. I watch a lot of strange and eerie films (nothing gratuitous). I've been working on a literary horror novel that I'm hoping will scare the socks off someone, someday. I'm also into political non-fiction and biographies.

Is it true that you have webbed feet?
Posted by Caroline at 6:31 PM