Sarah Pekkanen talks about The Best of Us, movies, discovering writing as a mom, and so much mores 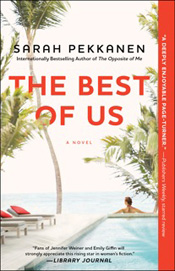 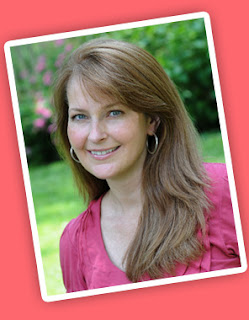 I'm so happy to have Sarah Pekkanen here on the blog today! She's the author of These Girls, Skipping a Beat and The Opposite of me. Her fourth novel, THE BEST OF US, won a Starred review from Publishers Weekly - "A deeply enjoyable page-turner" and Maire Claire magazine calls it "The perfect book to curl up with on a rainy day." Thanks so much for being here, Sarah!

So tell us about The Best of Us? Where did the idea spark?

I was feeling particularly exhausted - it had been a long winter and my kids were passing around the same virus for most of it - and I started fantasizing about a dream vacation. Somewhere sunny and tropical, like Jamaica, in a private villa on a white sand beach. I'd have massages on the beach - my ultimate fantasy! - and a private chef would cook the meals, and there would be plenty of wine and fun.... I knew the closest I'd get to that vacation would be going down a giant slide at a waterpark with my boys (which is fun, too, but not quite so glam, particularly when my MiracleSuit gives me a wedgie), so I decided to create that trip for my four stressed-out female characters. Friends since they college, they reunite for the vacation of a lifetime. But it couldn't all be naps and fruity rum punch - I threw in a whole lot of tension and a big hurricane named Betty.

You write a lot about relationships between women. Can you comment on the "gender wars" that seem to be going on in publishing  where if a woman writes about domestic issues she's "women's fiction," but if a guy does it, why, he's Franzen?

It's true that folks like Nick Horsnby, who writes the same kind of books as Jennifer Weiner and the rest of us in the "women's fiction" or "chick lit" category, tend to get a little more respect from the press. And a lot more attention. But I don't think readers care how we're labeled - they just want to read good books. It's mostly an issue within publishing and the media, which selects the books that receive attention. Luckily, we have champions like Jen and Jodi Picoult, who are calling attention to the issue and forcing some editors at newspapers and magazines to rethink how they cover our books. Jen and Jodi aren't doing this for their own benefit, as they're already superstars, but they're fighting on behalf of the rest of us. I so admire what they're doing, and how they're forcing a shift in the way editors and reporters view such novels written by women.

So you wrote your first book at the age of ten. You always knew you were going to be writer?

I did! I worked as a newspaper reporter for years, but rediscovered my love of fiction when I became a mom. One night when the kids were asleep I took a glass of wine up to the computer and began to type.... and those pages turned into THE OPPOSITE OF ME, my first book. Of course it wasn't nearly that easy - I rewrote the thing a dozen times, then found an agent, who made me rewrite it a few more times. It took years, but it was terrific training, and my subsequent novels came more quickly.

What's your writing life like? Do you plan out your books? How was writing this particular book different than any of the others?

I write everywhere and anywhere. Right now I'm in the passenger's seat of a moving car as I type this (If I keep my head down and ignore the road whooshing by, I don't get carsick). But my process has evolved. I outlined my first book pretty carefully, had an even tighter outline with my second book, and went nuts on my third by keeping color-coded index cards. For THE BEST OF US, I hoped I'd absorbed the rhythms of a commercial novel and I didn't outline it at all. I knew how the book would begin and end, but the middle surprised me every time I sat down to write.

Movies! I've had to put everything on hold for the past few months (we moved into a new house, among other life upheavals) and I'm about to turn in my fifth book. When it's in the hands of my editor, I'm going to take off a week or two and see all the movies I've missed recently. Popcorn, milk duds, and the big screen is my nirvana. Movies and books are the greatest escapes - there's no cheaper, more fulfilling way to travel to completely new world.
Posted by Caroline at 11:24 AM