Pulitzer Prize-winner Glenn Frankel talks about The Searchers: The Making of an American Legend, 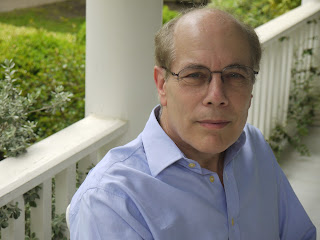 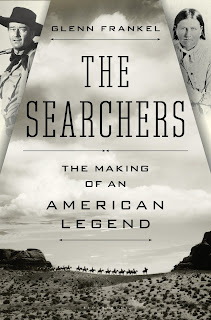 The Searchers is not just one of my favorite films--it's also one of Martin Scorsese's. Glenn Frankel's book, The Searchers: The Making of an American Legend, gets at the very heart of why and how this film is so important. He's the director of the School of Journalist and G. B. Dealey Regents Professor at the University of Texas at Austin, and he has been a visiting professor at Stanford, as well as a reporter and foreign correspondent for the Washington Post. He won the Pulitzer Prize for international reporting, and he's the author of Rivonia's Children: Three Families and the Cost of Conscience in White South Africa and Beyond the Promised Land: Jews and Arabs on a Hard Road to a New Israel. I'm honored to have him here.

The Searchers is actually one of my favorite films because it’s so disturbing. But as you so brilliantly point out, the film upends the novel it was based on, which centers on the true story of a white girl, Cynthia Ann Parker, captured by Comanches, who’s rescued as an adult, only to live in misery. Do you think the film would have been as equally disturbing if Ford had focused his story on Parker?

Actually, it was the novel that up-ended the original story by shifting the focus from Cynthia Ann to the uncle (and fictional adopted brother) who searched for her, and Ford followed the narrative path LeMay had established. LeMay and Ford were interested not so much in the abduction and in the life of the victim, but on the effect these traumatic events had on the pioneer community and the family. I do believe someone could make a terrific film about Cynthia Ann's life and the terrible price she paid. It would illustrate the human cost of the long twilight war of populations between Texans and Comanches. But it would have a very different focal point than The Searchers.

So much of your book, to me, is about the stories we tell others--and ourselves. While there were reports from white women about the brutality of Comanches, there were also reports of the Comanches; tenderness towards their children. So much of The Searchers, “a myth based on other myths” is infused with John Ford and John Wayne, that I wonder, do you think, unless someone writes, directs, produces and acts--that a story can ever be a pure one, especially since even readers bring their own experiences and feelings and prejudices to a story?

You're absolutely right in seeing the theme of storytellers and the way they use stories to explain the world to themselves and themselves to the world. Every story is a subjective one, and is influenced and shaped by the sensibility and the needs of the storyteller, and every story is received differently by the reader, audience, etc. So no story is "pure." Still, stories are universal: they have power and meaning and can be appreciated, albeit in different ways, by succeeding generations. We see things in The Searchers that an earlier generation may have missed or interpreted differently. I was surprised to read that the film was perceived in its time as just another pretty good John Wayne cowboy movie. It's only over time that people have come to understand its terrible power and what it says about race and love and gender.

Can you talk about how The Searches both upholds and undermines the myth of the savages vs. the noble white pioneer?

This is one of John Ford's great gifts. In The Searchers he presents the mythic John Wayne, our cinematic hero---the Indian fighter, the lone avenger, the charismatic seeker of vengeance and justice. We identify with Wayne because of his charisma. At the same time, we begin to see his flaws: he shoots the eyes put of an Indian corpse, scalps another corpse, breaks up a funeral service, and we begin to understand that his search for his niece has turned into a mission of retribution. Our dark knight intends to kill the damsel because she has been defiled by savages. At the same time, the purported savages themselves become humanized. We see the aftermath of a massacre of a Comanche village by troopers and we begin to understand the motives of Scar, the war chief, and to understand that he and Ethan, the Wayne character, share the same hatreds. The Searchers acknowledges and even embraces our conventional myths, then works hard to make us think twice about them.

Do you think that the fact that The Searchers is morally ambiguous is what will keep it a classic?

It's not moral ambiguity so much as artistic ambiguity that makes The Searchers a work of cinematic art. In so many places, Ford deletes the dialogue and exposition and simply gives us the visual narrative, leaving us to decide what it means. When the camera zooms in on Ethan's face at the fort where he has seen the deeply disturbed white Indian captives: is the expression on his face one of madness, despair or anger? Is it then he decides he will kill Debbie when he finds her? Ford doesn't tell us, and we must decide for ourselves.

Similarly, when Ethan runs Debbie down and must choose whether to kill her or rescue her, why does he make the decision he does? The shooting script has him utter a line that makes clear why he makes his decision, but Ford deleted it. He wants us to decide for ourselves. It's a wonderful artistic choice Ford makes.

1) Helping our students at the School of Journalism prepare for a very exciting but uncertain future.
2) Figuring out how to talk about the vast amount of material and characters in my book in a 30-minute talk. Do I emphasize 19th century Texas or 20th century Hollywood? Cynthia Ann Parker or John Ford?

There are so many other questions we could discuss, Caroline. But these were great ones. I'll leave it here for now. Thanks for being such a thoughtful reader---it's all any author can ask for.