Howard Kaylan storms the White House: read an excerpt of the forthcoming book, Shell Shocked: My Life with the Turtles, Flo & Eddie, and Frank Zappa, Etc. co-written by Howard Kaylan and my husband, Jeff Tamarkin


Happy Together. She'd Rather Be With Me. Those are just two of the hits from the Turtles, a 1960s folk rock band that was known for its mayhem and mischief. Howard Kaylan, the group's frontman, partied wildly with just about everyone, from Jimi Hendrix (Kaylan threw up on Jimi's velvet suit) to Bob Dylan, and his memoir, co-written by my husband, Jeff Tamarkin, is coming out April 16th.

And a part of the book, about Howard's adventures during Tricia Nixon's coming-out party at the White house has just been excerpted in ROLLING STONE. 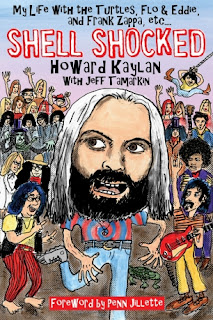 Hi! I know this is kinda off topic nevertheless I'd figured I'd ask.
Would you be interested in trading links or maybe guest writing a blog post or vice-versa?
My website covers a lot of the same topics as yours and I think we
could greatly benefit from each other. If you might be
interested feel free to send me an e-mail. I look forward to hearing from you!
Terrific blog by the way!

Here is my blog; dumbsyntax.com