Jim Gavin talks about Middle Men, writing in binges, how bad jobs teach you not to take yourself too seriously, and so much more Jim Gavin’s short stories about men and mayhem and the dark side of California dreaming are knockouts. His fiction has appeared in The New Yorker, The Paris Review, Zoetrope, Esquire, Slice, The Mississippi Review, and ZYZZYVA. He lives in Los Angeles and I'm thrilled and jazzed to have him here on my blog. Thanks so much, Jim. 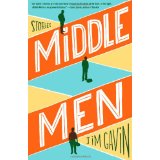 Tell me about the title and how it works thematically in the book?

In the title story, the father and son plumbing salesmen are “middle men,” in the literal business sense, as they work for a manufacturer’s rep, brokering toilets sales between factories and wholesalers. But hang on, because things get even more exciting! In all the stories, the characters are middle men in that they find themselves caught somewhere between their dreams and the often disappointing realities they find themselves in.  This middle holds both the promise of a brighter future, and the terrible sense of dread that it will all go wrong.  It always goes wrong. The younger protagonists are naïve and wrongheaded and they fail in a million different ways, but if nothing else they care about the world and want to be a part of it.  Dante’s Purgatory is serene but cast in shadow, and the souls stay there until they then learn something about themselves.  To bend a John Cheever quote to my purposes, all the protagonists receive an education in economics and love.

What's your daily writing life like?  Do you have rituals you use?

I’ve never had a set schedule and I tend to write in binges. Avoiding going online first thing in the morning is always a good thing to do, and during the last decade I’ve managed to do that at least three or four times. I got a lot of work done on those days.  I don’t know – some days I fall into intense self-loathing, feeling like I’ve wasted every second of my life; other days I feel happy to indulge all the things I like to distract myself with, knowing that those distractions are somehow the key to whatever I’m writing.  Usually, the best motivator is just reading something great, a sentence or line of poetry that gets you excited to sit down and play with words.

I have to ask about all the jobs you yourself have had--from plumbing salesman to gas station manager and more. What does working such jobs do to you? What does it get you to learn?

The most important thing is that it teaches you not to take yourself too seriously.  Once at the gas station, while I stood by the old analog pumps, staring into the street and thinking of nothing at all, a dude who was filling up his truck looked at me with a mixture of horror and pity and said, “Jesus, man. Is this your life?” I laughed, but it sort of rang in my ears later when I was mopping up the men’s room for the millionth time. It occurred to me that maybe I should be doing something more with my life.  But I’ve never really had the Faustian urge to dominate man and nature. I worked at the station for almost five years and, sadly, I loved it. All the guys on staff were local kids I grew up with, and the main part of our job was sitting around all day, telling stories.  When I got my plumbing job I was excited to make tons of money, but I was a terrible salesman.  To make a worthwhile sale you have to ask someone to do something, and I hate asking for things more than anything.  I only lasted a couple years.  There were good moments – I helped set up some Delta faucet displays at a couple wholesalers in Victorville, but you probably already read about that triumph in the summer 2006 issue of the Supply House Times.  I won’t expand on it here. The company I worked for had a lot of great people.  A certain kind of deadpan humor presides over the plumbing industry.  Every year we had a Christmas party at our warehouse in Gardena and my boss would give out awards.  One of the categories was the “Perez of the Year Award,” given to one of the ten Perezes who worked for us.  I never won any awards, but I’m glad I got a chance to work there.

Lionel Messi. Watching his Barcelona team play every weekend is one of the purest joys in life. I’m totally insufferable to be around when I watch him play.  I gasp and moan and writhe in a truly unsavory fashion. Lionel, light of my life, fire of my loins. My sin, my soul. Li-O-Nel. Votive candles must be lit daily for Messi’s continued health, because without his grace and magic the world will sink into darkness.  Xavi and Iniesta are pretty good too.

Also, the twitter feed of @dadboner, which follows the deeply American adventures of Karl Welzein, of Grand Blanc, Michigan.  Dark, sad, hilarious, depraved, and even a little soulful, it is the standard by which all other twitter narratives will be judged.

What have I been reading? I’m glad you asked. I just read The Adults by Alison Espach.  It’s brutally funny and unsentimental but always humane, and on just about every page there’s a sentence or two that makes your jaw drop.  Espach subverts every coming of age trope and continually takes the story to surprising places.  Great stuff.

I also loved The Might Have Been by Joe Schuster, an incredibly wise and haunting novel about baseball and the American dream.  I’ve read a lot of sports novels over the years, but this one is just on another level.  The story follows Edward Everett Yates, who after playing ten years in the minor leagues, finally gets his shot at the big leagues. It all goes horribly wrong, and Yates ends up coaching for many years in the minor leagues, cobbling together an itinerant life on the beat down edges of small town America. I was mesmerized by how effortlessly Schuster moves through time.  He gives us the entire life of a man, and it’s unforgettable.