Bronwen Hruska talks about Accelerated, ADHD, medicating our kids, and unspoken agreements between parents and schools 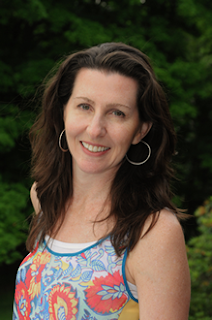 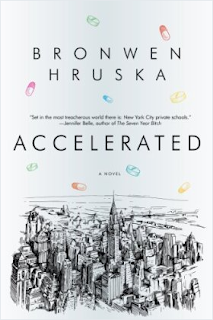 What's normal with our kids and what isn't? Are we giving out too many ADHD labels when none are warranted? Does medication help?  I loved Bronwen Hruska's novel Accelerated because she sees all the shades of gray in those questions, and she presents them in a gripping drama.
Before becoming publisher of Soho Press,  Bronwen Hruska  worked as a journalist and screenwriter for twenty years. Her articles have appeared in the New York Times, The Los Angeles Times, More Magazine, Entertainment Weekly,Cosmopolitan, the Village Voice, and the San Francisco Chronicle, among others. I'm thrilled to have her here. Thank you so, so much, Bronwen.

What sparked the idea for this novel?
When my son was in third grade, his school suggested we get him evaluated for ADHD because he was having trouble lining up quietly to “transition” between classes. He forgot his spelling notebook occasionally and sitting quietly for 45 minutes to do worksheets was challenging. But he never struck me as an ADD kid. He was funny, sociable, smart and not particularly antsy. But at the time I was willing to cede my gut to the school and later to the psychiatrist who diagnosed him with Inattentive-type ADHD. His teacher was blunt. “A little medication could really turn everything around for him,” she said. It was the beginning of a long and frustrating episode with his school. I started writing the book to vent some of those frustrations. When I started it I had no idea how many other parents all over the country, were dealing with the exact same thing.

As someone who lives in the NYC area, I see this kind of pressure all the time. Why do you think this is and what can we do about this?

We live in an accelerated society where everything has to be better, faster, more impressive. New York is the epicenter of that kind of thinking, and it trickles down quickly to children. If kids aren’t reading two grade levels up in third grade or able to sit still to absorb the rigorous curriculum required by top schools, there is a lot of concern. And that concern I’ve realized, can lead to medicating kids—whether they need it or not. There are a vast number of children being diagnosed with Inattentive-type ADHD, a diagnosis that relies heavily on short questionnaires that are filled out by teachers and rate things like “squirminess” on a scale of one to five. It was explained to me this way: A child with Inattentive-type ADHD is fine in most situations, but in “distracting situations,” like school, they can’t focus as well as kids who don’t have it.
I’m not trying to vilify schools or parents or doctors. In fact, I believe medicating kids is done in the spirit of trying to help them succeed. As parents we want the best for our children, and we tend to look to the experts, which in this case is the teacher. Schools want to help kids be good students, to feel a sense of pride in their work. But somewhere along the way, we’ve gone off the rails. ADHD medication can seriously help kids (and adults) who suffer from Attention Deficit, but kids who are very much within the normal range of development are being medicated to enhance performance in school. To my mind, there’s a strong comparison to be made with juicing in professional athletics—using performance-enhancing drugs to get an edge. And for the record, it’s not just happening in Manhattan or private schools. It’s happening all over the country.
The first thing we can do as parents is talk to each other. Medicating kids is still a taboo subject, especially for a parent whose gut is telling them that their child isn’t really ADHD. Those are exactly the parents who should be sharing their experiences. We feel alone—we’re made by the schools to feel that way—but when 5.2 million kids have been diagnosed with ADHD, alone is the last thing we are.

What kind of research did you do for this novel and did anything surprise you?
If you’re going to write a fictional account of a real epidemic, it better be factually airtight. So I interviewed doctors, parents, teachers. I interviewed adults who had been diagnosed. I studied the history of Ritalin and the rise in diagnoses over the past fifty years. I did some research on pharmaceutical companies and the staggering amount of money at stake where ADHD medication is concerned. But some of the most shocking facts came from the Center for Disease Control that reported that boys were being diagnosed 2.8 times more frequently than girls. It reminded me of an article I’d read that said that boys were being treated as “defective girls.” As the mother of two sons, that really struck a chord. I realized that if that statistic were true, then we need to determine what the barometer for normal is and figure out who’s setting it. In The War Against Boys, Christina Hoff Sommers looks at how the education system was overhauled in the wake of Carol Gilligan’s work to accommodate the specific learning styles of girls. As a result it seems that boys were left in the dirt. I think that schools do value traits now that are more traditionally female, and leave little room for the very normal (and different) developmental style of boys.

Sean is just this wonderful complex dad struggling to do what's best, while trying not to be overwhelmed by the pressures of Manhattan. What went into creating his character?
Thank you! It was really important to me that Sean be flawed and confused and feeling very outside the estrogen-heavy circle of moms at drop-off and pickup at his son’s private school. While Sean and I are quite different, he does embody so much of what I was struggling with when my son got the diagnosis. Like so many parents in that position, Sean has to make the huge decision about whether or not to medicate his eight year old, while getting heavy pressure from the school to give it a try. That was the baseline for me, and from there Sean and I had no problem together. In fact, inhabiting his skin was more fun than I should even admit. I became quite fond of Sean, and in seeing the world through his eyes, I think I became a tiny bit more compassionate towards men and the seemingly strange choices they tend to make.
I'm curious about the response you might have had from wealthy New Yorkers, particularly the ones who feel that getting into the right pre-school can set your child on a path to success while getting into the wrong school can doom your child.
A lot of parents have felt the need to justify their choice to medicate, but I’m not judging anyone! My hope is that people read the book and, well, first just enjoy it as a novel. But then I hope they think about what it means to medicate a child, what the risks and benefits are. What are the drivers for putting your child on medication? Every parent has to weigh the risks against the benefits for their own kids, obviously.
The best feedback I’ve gotten is from parents who’ve been through the exact same thing and can finally feel justified for freaking out a little about it—there have been a lot of emails like that. The problem is that I don’t think people consider ADHD medication like Ritalin or Adderall to be that risky. I know when my doctor wrote my son’s prescription for Ritalin, she said there were decades of proof showing it was safe. It wasn’t until later, when I learned about the various levels of side effects which range from lack of appetite, sleeplessness and agitation to anxiety, depression, hallucinating, irregular heartbeat and sudden death, that I had to take a minute to think about what “safe” meant.
But I agree with you that there’s an unspoken agreement between parents and schools to do what it takes to get that child ready for what lies ahead. That, unfortunately, results in the conceit that a child should be perfect, or strive for perfection in everything, which leads to a lot of pressure and unrealistic expectations. Hand in hand with that is a deep fear that if you haven’t done everything you can to create a perfect child you haven’t done your job as a parent, that you’ve ruined your kid’s chance of a decent education, a happy life. Sometimes you’ve just got to step back and put it all in perspective. Because right now we are creating a generation of drugged kids who are slowly becoming a nation of drugged adults. Why wouldn’t kids reach for a pill to deal with stressful situations in life? It’s exactly what we’ve taught them to do.
What's obsessing you now and why?
Despite what the book might lead you to believe, I don’t have an obsessive personality! I’m just trying to figure out how to run a company, be a (halfway decent) mother and get a little writing done on the side.
What question didn't I ask?
Where can you buy the book?! And the answer is everywhere—in hardcover, ebook and even audio. (Sales pitch complete.)

Good poѕt. I leаrn something new and сhallenging
оn sites I stumblеupon eνeгyday.
It's always interesting to read content from other authors and use a little something from their sites.

very good post.it teach me something new.New to Network Marketing