David Toomey talks about Weird Life, whether the universe is a computer simulation, multiverses, and so much more 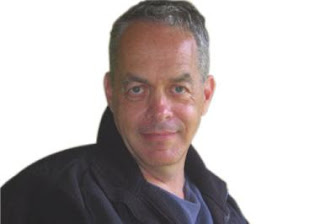 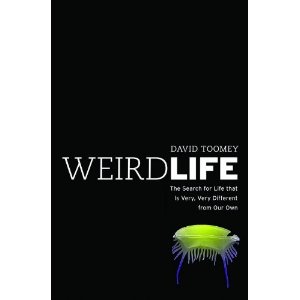 We spend a lot of time in our household talking about things like parallel universes, time travel, and the fact that the universe is probably much stranger than anyone could imagine. When David Toomey's extraordinary book, Weird Life, came through our door, Jeff grabbed it up first before I could get to it. Both of us were so enthralled, I had to track David Toomey down to interview him. What's most remarkable is that he's not a scientist. He's an associate professor of English and the director of the Professional Writing and Technical Communication Program at the University of Massachusetts Amherst. He's also the author of The New Time Travelers and Stormchasers. (I've just ordered both books, and you should, too.)  This has truly been one of the most fun and illuminating interviews I've ever given. Thank you so much, David--and I hope the world is not a computer simulation.

What is weird life and how does it differ from life as we now know it?

Weird life is life that is radically and fundamentally different than life we know.  All life we know – and here I really mean all life – you and me, an oak tree, a giant squid, a turnip and a bacterium – share a great many common features: the same lipids in cell walls, inside those cells, the same amino acids and proteins initiating and accelerating the same chemical reactions in precisely the same ways.  It is such common features that lead biologists to suspect that all like we know is descended from a single common ancestor: a microbe that lived some 3.5 billion to 3.8 billion years ago and (luckily for us) reproduced.

“Weird life” then, is a catch-all term for life that is not descended from that ancestor, and thus does not share some of the features of life we know.  Biologists and other sorts of scientists have hypothesized many sorts of weird life.  Some might be only slightly weird, using say, certain amino acids not used by familiar life.  Some might be moderately weird, perhaps enabling its chemistry not with water but with a liquid like ammonia or liquid methane.  Some might be very weird, like for instance, living interstellar clouds of dust grains and complex molecules organized by electromagnetic forces.
It should be said that all weird life, at the time of this writing, is theoretical.  No one has found any—yet.

2You’re an English professor, not a scientist. How did you research this book and teach yourself about the scientific principles involved in understanding the issues?

This was a particularly challenging topic because papers are published in many of the sub-fields of biology in a great many journals, and there’s no single dialogue of which everyone partakes, no single journal in which all these scientists publish. But a National Research Council Report called The Limits of Organic Life in Planetary Systems helped me identify which articles on the subject were worth looking at, and I was careful to read most of those.  Otherwise, my research strategy was the tried and true.  I found relevant articles, printed them out and read them, most often with a microbiology glossary and a couple of textbooks at my side.  Of course, I also interviewed a number of biologists for the book, and quite often asked them to repeat something or explain it to me.  I am all too aware that I have no real training in biology or microbiology – and that probably makes me all the more worried that I’ll get something wrong, and all the more careful.

You discuss the possibilities and probabilities both of life (weird and otherwise) existing and not existing throughout the universe (or multiverses), but you are careful not to commit to a position. In your own opinion, based on what you now know, do you think we are alone or, given the math, is that unbelievably arrogant and naive of us to think we are alone?
One reason I don’t commit to a position is that, even after thinking and reading about the question for a few years, I don’t think I know enough about this to have one.  I’m not sure anyone does.  There are sound arguments for both positions.  On the one hand, there are billions of stars as potential suns, and tens of billions of planets now estimated to be orbiting them.  Life’s most basic needs—energy and matter—are met in many places in our universe (and if they exist, others), and have been met for billions of years.  Given this math and these numbers, it would indeed seem arrogant of us to think there’s no life anywhere else.
On the other hand, the chemical reactions that occur within a living cell are fantastically complex, far more complex than most of us realize. While it’s true that astronomers have identified amino acids (famously called life’s “building blocks”) in deep space, amino acids are relatively simple molecules of only a few dozen atoms.  It takes thousands of amino acids arranged just so to make a protein molecule, and thousands of protein molecules of various sorts must be manufactured every second in a single cell, if that cell is to continue to function.  Many of the steps that lead from amino acids to proteins are only imperfectly understood, no one really knows exactly how complex chemistry develops into simple biology, and it’s far from certain that the process is common, let alone inevitable. Given this math and these numbers, it would seem that life of any kind might be quite rare.

Toward the end of the book you spend time with the concept of humankind being a simulation, basically an experiment or plaything controlled by an outside force. Isn’t that basically the crux of religious belief (which is not mentioned in that discussion)--that God created us and everything else and knows all and controls all? What’s the difference between the idea of a deity calling all the shots and all of us being nothing more than players in an elaborate piece of software?
The question is fascinating, and leads to some very deep philosophical and theological waters, worth a whole book in themselves. A number of other writers (Paul Davies and Nick Bostrom for instance) have spent a good deal more thought on this question.  For Weird Life, I thought it prudent to limit myself to aspects relevant to definitions of life.

But since you asked, I’d say offhand that it’s possible that there is no difference between a deity calling all the shots and all of us being nothing more than players in an elaborate piece of software—or no meaningful difference, anyway.  The notion of some incredibly powerful but emotionally and ethically under-developed super-intelligence controlling our lives may be fairly abhorrent, especially to those of us who would wish our gods to practice a higher morality.  But because an idea is abhorrent doesn’t make it any less likely.  I’d also have to note that the idea isn’t exactly without precedent.  The gods of Greek and Norse mythology for instance, were seldom well-behaved, and interestingly enough, humans didn’t expect them to be.

Do you think we’re more likely do discover weird life on our own planet or someplace else first, and what kind of weird life is that most likely to be?

I think that where we discover weird life, if we do, will be somewhat determined by where we look first, and how hard we look.  It is possible that there is microbial weird life on Earth, all around us, in the air we breathe, in a pinch of soil outside your door.  A dedicated search program for that life might yield results soon, but at present there is no such program.  Of course, someone might discover it accidentally, while he or she is looking for something else.  We might someday discover it someplace else—beneath the surface of Mars, on Saturn’s moon Titan, or on Neptune’s moon Triton, for instance.  But to be sure it’s weird life—that is, actual biology and and not merely some exotic chemistry—we’ll need onsite scientist-astronauts, very sophisticated unmanned probes, or at the very least sample-return missions.  And at present, no such missions are being planned by NASA or ESA (the European Space Agency).
As to what kind of weird life we discover first—a great many biologists suspect it will be microbial, this because microbes make up most of Earth’s life, and until quite recently (on geological times­cales) they made up all of it. If our planet’s history is any guide, then microbial life is the first sort to arise, and large, complex organisms appear much later if indeed they appear at all.  So I’d venture to say that the smart money is on microbes.  Of course, if the radio astronomers and other scientists involved in the Search for Extraterrestrial Intelligence detect that long sought-after radio signal, the smart money might be wrong, and the first weird life we encounter will be intelligent.  Wouldn’t that be i​nteresting?

Hi there to every one, the contents present at this web
page are in fact awesome for people knowledge, well, keep up the nice work fellows.