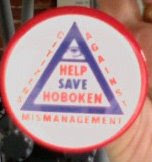 Jeff and I are no strangers to working for what is right. Especially in the city we love. We fought long and hard to get the head of our son's school out (long story, involving hate mail stuffed in our door for our efforts, threats, and eventually a fantastic new head) and we worked long and hard to get Obama in.  Now, we are battling the mayor, who bloated the budget and mismanaged things so badly, the state had to come in and take over.  Taxes were raised a whopping 47% and now the mayor is talking about doing a reevaluation of property, which would kill us, since the 1865 brickstone we bought in 1993, at a low price and low taxes, is now worth about 6 times as much.  A neighbor told us she expects the taxes on her place to go up to 30,000.  Surely, this cannot be true!
I have no idea where we could even move if we had to. We were priced out of Manhattan, the city we adore. Brooklyn is just as expensive as here, and so is Jersey City. We are not small town or suburban people, and living in the country would just give us hives. (No offense to anyone who loves living there.) Plus, we renovated our home, rebuilding it. We married while living here.  We had our child here and published our books and we love Hoboken.  Despite, the corruption going on now, we love it and want to heal it.
So, we joined forced and protested at City Hall with about a thousand others so far.) We joined groups! We learned disturbing facts! Turns out the mayor is paying the head of the fire department more than what the head of NYC fire department makes. Many more people are employed at high salaries than is needed. City hall salaries could buy everyone in the city a small country of their own. And there is the matter of a million dollars missing....hmmm, wonder where that went?
If anyone has ever gone through a reevaluation, would you let me know about it? Otherwise, where is the Valium, the industrial strength kind? And the dark chocolate? The 70% kind?
Posted by Caroline at 6:50 AM

Does Hoboken have any kind of resident discount? Cambridge does (probably because we have so many renters) - if you live in the house you own, you pay less than half as much in taxes. If you don't have something like that, maybe you can push for it on teh grounds that people living in their properties is better for the city!

Best of luck. Your home is beautiful and I want you to be able to stay in it!

Come on out to L.A. low prop taxes, lots of artists, sunshine, occasional earthquakes that level everything, and me...

Very tempting, BUT then I would have to learn to DRIVE.

hmmmm we are going thru something similar here- Ottawa, ON Canada-the capital. All i can say is that it might not be as bad as rumoured BUT if it is...they usually phase it in over several years and before it becomes excruciatingly painful to your budget, someone else takes over in the city office and everything is put on hold again....and the taxes stay put! Fingers crossed for you!!!!
BTW read your post about Max's performance! how wonderful!
BTW again, i have a 'Max' also:)
Lo

Hey Lo! What is your email! I looked at your blog and couldn't find it. Isn't Max just the most brilliant name? And thank you for such a reassuring post.