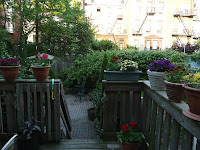 I lived in Manhattan for 15 years and adored it. When I left, I was kicking and screaming, even though we were just moving 7 minutes by subway away to Hoboken. We needed a house, we wanted a child, and we found this glorious 1860's brick rowhouse full of secrets, like fireplaces behind the wood paneling we tore down, rosettes on the ceilings, and gorgeous wide plank floors hidden under orange shag carpeting! Jeff and I built the house up from scratch, and even put in a time capsule under the stairway. But the thing that I love the most is our little urban backyard.

You can't really see, but from the deck, you go down four steps and there is a kidney shaped bluestone area bordered by wild flowers, plants, lilac trees and potted veggies, then in the back is our garden, with a small iron table and two chairs. Everything is surrounded by a six ft. high weathered wood fence for privacy.

Now, of course, Hoboken is run by a truly corrupt mayor who has bankrupt the city (literally) and really deserves to be in jail, much like the mayor before hm (who DID go to jail.) The city is talking about raising property taxes astronomically with a new assessment of everyone. We could afford our house back in the 90s when no one wanted to live in Hoboken, and now that everyone does, the value has skyrocketed, which makes me very, very nervous about all of this. I felt so panicked and worried, that I spent all morning in the backyard trying to soothe myself down and convince myself that no, we will not have to pick up stakes and move to Thumbprint, Arizona. (no offense to Arizona intended.)

Sigh. Anyone know anything about reassments and also, how to fight them? And more importantly, anyone got any Valium?
Posted by Caroline at 11:54 AM

As for property reassessment...I guess you'll have to wait and see what they say about the value of your home...but the good news is that a lot of people in your neighborhood will be in the same boat and if you have to, you can all fight it together :)

Caroline - If this looks like it's going to happen, maybe you and your neighbors can get some info about real estate prices, falling property values, etc. Maybe you can enlist a local city councilor or someone like that to make the point that it is much better for the city to KEEP its homeowners than to chase them out for speculators? GOOD LUCK!!!

PS - I don't know the exact calculation, but real estate taxes do come off your income taxes, so whatever they raise it to, it won't be as bad as it sounds. (I know, Cambridge did this, too, a while ago.)

That's why we love Baltimore. Close to other cities, very cheap housing and there are limits to how much your taxes can go up, even if they reassess it. Our property value just doubled (it had been really undervalued) and they can only raise it by a few percent each year.

Also, when houses are reassessed, there is normally a form included with the notice about appealing it. I know a lot of people who had great luck with appeals.

I can't thank you all enough for such reassuring advice. This is doubly difficult for me, because moving is very difficult since my dirty little secret is I don't drive (I have my license and get it renewed every time around, but I'm totally phobic) so I need to live in a city where I can walk and get everywhere I need to by subway.

Much, much gratitude on my end to all of you.

Assessment goes up but the mill rate goes down and the jump is usually not as drastic as it might first seem.