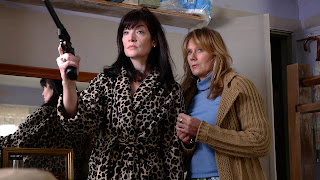 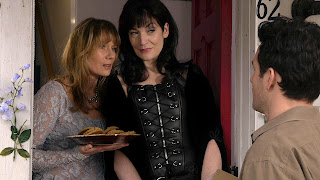 I have no clue how or when I met director/producer/writer Michael Medeiros, but we got to talking via email and FB, and at one point I was even sort of in the running to be the “weird-sounding voice he needed for a minute” in his spectacular new film, Tiger Lily Road. (take a gander at clips here.)  I’ve been following the whole process of his film and when Michael sent me a disc of the finished film, I was promptly and totally knocked out.

First of all, the film looks and sounds breathtakingly great, thanks in part ot cinematographer Nils Kenaston and director Medeiros. The movie has moments you don’t forget: the luminescent glow of snow punctuated by the determined tromp of bright boots. Two glossy eggs being beaten in a bowl. A purple sweater that’s so saturated in color you can’t take your eyes off it. All of it ties together against a teasing backdrop of impish music from Milosz Jeziorski. The performances are so full of nuance, that even a five minute clip featuring a convenience store checkout girl who refuses to sell a hot dog because the buyer is four cents short is a revelation because of both her carefully applied sludge-colored lipstick and the calibrated roll of her eyes.

Medeioros told me that the idea of the film came from a dinner party, when he met these two fantastic women and neither one of them had a partner, and he couldn’t figure out why. He began to think about Callie Khouri’s groundbreaking film, Thelma & Louise, and wondered: are we still stuck over a precipice? Or have we crashed and flown on? If the women, Annie and Louise, in his story, have not evolved beyond that moment in mid-air, what’s holding them back? What do women really want and is it possible? And if it isn’t, then what is? In short, Tiger Lilly Road is a film about women figuring out their options without men. Two best friends and an old woman share a rural Connecticut house, and they are bemoaning their love lives. Why don’t they have successful relationships with men? “It’s over for us,” one character, who used to be the town bad girl, flatly tells the other, and that does seem to be the case. They swear off even trying for men for a year, but then a sexy, young fugitive stumbles into their midst, and each woman begins to have an idea of what she wants—and why—and makes plan to get it. But if you think you know what’s going to happen,  you’re wrong, because the film keeps breaking the ground from under your feet and rearranging it in off-kilter ways, and it’s so deliciously different, that even my very critical teenaged son came in and sat down to watch.

“I wanted to use theater trained actors for their ability to conceptualize complex characters,” Medeiros told me, and the performances are amazing. Rita Gardner, who was in the original production of the Fantasticks with Jerry Orbach, is hilarious and moving as the old woman of the bunch who seems more connected with life and her sexuality than the younger women do. Two-time Emmy winner, Tom Pelphrey, and uber talented stage actresses, Ilvi Dulack and Karen Chamberlain give incandescent performances. So do Tom Nardini and Sarah Shaefer.

Outrageous, smart and deeply subversive, this dark little fairy tale shocks, surprises and pops with provocative dividends. Come on, you know you can’t wait to see it.

MICHAEL MEDEIROS wrote and directed the 2007 dramatic short film,
Underground, which played festivals in the UK, France and the U.S. Michael grew
up in Hawaii where he became enthralled with the theatre and soon moved to NY
to train as an actor with legendary coach, Uta Hagen. He most recently received
critical acclaim at Chicago’s Goodman Theatre in Camino Real. Film & television
projects include, X-Men First Class, Synecdoche New York, Sometime In August
(Hamptons –Golden Starfish), RoboCop2, Person of Interest, Son of the Morning
Star and Law & Order. He is a founding member of the writer’s lab, New River
Dramatists.
Posted by Caroline at 9:35 AM