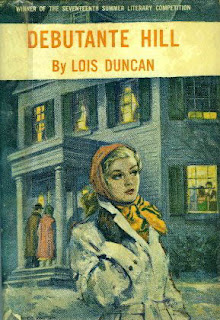 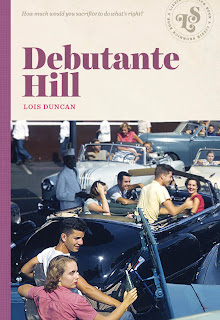 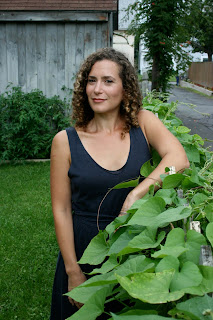 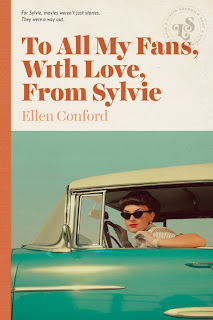 You all know and adore Lizzie Skurnick, right? She's the columnist for Jezebel.com’s Fine Lines and the author of ten teen books in the Sweet Valley High, Love Stories and Alias series.  She makes up words for the New York Times Magazine, and she's written for the New York Times Sunday Styles, the LA Times, NPR.org, The Washington Post and many other publications. Her poetry has appeared everywhere from Morning Edition to the Iowa Review toNew York magazine online, and she is the recipient of residencies or awards from Yaddo, the Ucross Foundation, the Virginia Center for the Creative Arts, and the AWP. An expanded edition of her Pushcart Prize-nominated chapbook of poetry, Check-In, was released by Caketrain Books in 2009. She lives in Jersey City and she has the coolest head of curls I have ever seen. Oh, and she's also hilariously funny.

So, remember all those teen angst books from the 30s to the 80s? Lizzie and Lizzie Skurnick Books are bringing them back, and I couldn't wait to talk to her about them. Thank you so, so much, Lizzie!

How did Lizzie Skurnick Books come about?

The short answer to that question is, the wonderful Robert Lasner and Elizabeth Clementson of Ig Publishing asked if I'd be interested in doing the series with them this past September, after I started posting covers from the era on the Facebook page for my book, Shelf Discovery. We were thrilled and surprised to find that most authors' works were available, and the authors themselves were happy to have their works back back on the shelves. (A few took them back to the original publishers with our offer, and they put them back in print themselves. This is vexing for my OCD, but as long as they're back in print.)

The long answer is that, as a child, I read hundreds of books that I never forgot that made me who I am; then, at 35, began to write about them; and then, at 39, was given the wonderful opportunity to put them back into print when the publishing community began to jettison them in earnest.

Why do you think the books we read as teens keep resonating through out lives? At least they do with mine--

We all know that adolescence is a time of great discovery, turmoil, and rich emotional experience (to say nothing of hilarity, unintentional and otherwise). Authors were mining this vein before their was any concept of YA. Remember, from the 30s to the 80s, our families, schools, and workplaces changed radically. There was the rise of feminism and civil rights; there were massive wars; divorce and sexual revolution changed the idea of family; our class structures altered radically. The concept of teenagers at all was fairly hazy until it was codified in the 50's, so in some ways, these books were also about the adolescence of our changing country.

Of course, they also spanned all genres, from children's classics to domestic dramas to historical fiction to sci-fi to fantasy to thrillers to pure whimsy. (Psychic dolphins; spiritual awakenings; island survival.) So when you have a scene in Beverly Cleary's books about Ramona's father angrily slashing his wife's pancakes to point out they're not cooked, this is actually a scene about a marriage and a recession -- seen from the point of view of a child, when it's most terrifying. That sticks, because that's the kind of experience and conflict we all went through as children.

So it's almost funny that teen fiction has this reputation of being light and fluffy, or dumbed-down. I often think that if an alien came down to earth, the best way to teach them about the 20th century in our country would be to add this period of literature. Plus some Updike and Baldwin, to be reasonable.

Do you think, in the light of how YA has changed, that you would have been better off if you had had the books that are out now for teen readers, rather than the ones you had when you were 14?

I think the YA now is very interesting and wonderful in a different way, and I'm glad it's getting published. But I think it is, as my people say, a shande that the books we're republishing went out of print in the first place. You don't want the magical "Jacob Have I Loved" and "From the Mixed-Up Files of Mrs. Basil E. Frankweiler" to be the only books that let readers know this literature was here at all. So I feel honored and privileged to bring them back both to readers that already knew them, and readers that will discover them.

I'm also especially interested to see what new group of readers they find! When I published my book of poetry, I was really tickled to see that it seemed to go over big with lawyers and, weirdly, my childhood friends' parents. Maybe a splinter group of radical French Socialists will demand Norma Klein in translation.

How the heck do you manage to do all that you do? You have the busiest, most wonderful life.

I am not happy unless I am doing 18 different things. One of my favorite stories is from a very famous author who told me that she wrote her books in the basement, while the children were sleeping, at the same time that she was creating felted art to try to sell to Bloomingdale's. (This was the 70s.) She had, she told me, no idea which venture would take off.

And I think if you look back at writers' actual lives, you'll find that a lot of them created and published and taught and critiqued and did silly things, all at the same time. Republishing all these old books has also taught me that it's important to publish as much as you can to make sure even one or two things survive. Many of my writers have written 30 books and even had their books made into movies and Afterschool Specials. Thirty books! And now, thirty years later, you can't find a one. I've written something like 14 books and contributed essays to 10? -- I have no idea how many. Only one is in print. And that's not even counting the hundreds of articles I have on the internet, which would all disappear immediately in a power outage.

So if I could say anything to younger writers -- not that you asked, but I am all advice after one cup of coffee -- if you have any interest in immortality, don't spend 10 years polishing one opus. Spend 20 years writing and writing, in hopes that you'll get to know yourself well as an artist, and get good enough to churn out one or two books that survive. (Or, frankly, if you're wildly talented, 30 that someone like me will treasure, and bring back in your dotage.)

After I read and loved "Wolf Hall" and "Bring Up The Bodies," my friend Barrie insisted that I read all historical fiction extant, a genre in which she is expert. I'm about 50 books in now -- I can go from Eleanor of Aquitaine up to James I of Scotland. (In truth, there's a period around the Magna Carta and various Edwards where it gets a little hazy. One day I will get it clear who "Edward the Confessor" is.) Luckily there are about 571 books just on Anne Boleyn.

I'm also expecting a baby, and have found that these books all contain a significant amount of information about the stages of giving birth. (And periodically murdering or swapping out babies, but whatever.) So now I know all about "walking" and birthing stools, and when you push, and when you die from the "white leg." I'm hoping they've solved that one by now.

What authors I am loving now! I'm going to take this opportunity to recommend another dear friend's mother, Judith Merkle Riley, whose hilarious and brilliant historical fiction sustained me the entire time I was planning and executing this pregnancy. If it was a girl, I was probably going to have to call her Judith. However, it is apparently a boy, and Merkle is a no-go.

How can people find and support Lizzie Skurnick Books and what's next for the company?

You can find Lizzie Skurnick Books in any bookstore, online or on-site, as well as, one hopes, any library. We're also about to start up a subscription service so you can simply swan around and get a new book each month, direct from us. We've got a few years' worth of books already in the hopper, so I advise the latter for completists. Look out for a list in the next few weeks! And go to www. lizzieskurnickbooks.com

What fun! I hope this means she will include some juvy historical fiction like Another Spring or The Middle Button.

We are doing some great historical fiction -- I hadn't heard of these. Who wrote "Another Spring"? I can't find that one.