Let's hear it for debuts: Sara Divello talks about Where in the Om Am I? 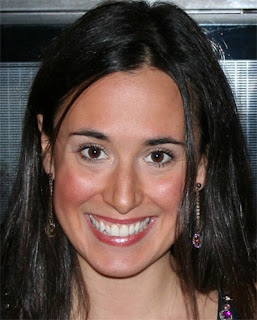 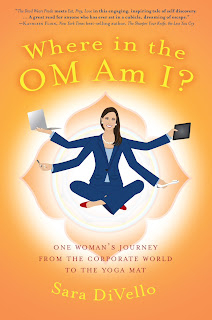 Those of you who know me, know that yoga makes my teeth itch. However, that doesn't mean that I don't love reading about it, especially when the book is as fresh, funny, and smart as Sara Divello's Where In the Om Am I? Don't just take my word for it. The notoriously cranky Kirkus Reviews says the book is "A must-read for yogis (or would-be yogis) who enjoy a little snarkiness with their savasana.” Thank you Sara, for not making me do a headstand or yoga breathing, for writing such a hilarious book, and for coming on my blog!
I always knew I wanted to write—but I just assumed, without even thinking about it, that I would write fiction. Then, at some indiscernible point, I realized I had a lot of so-crazy-they-have-to-be-true stories and I really wanted to share them. That’s how “OM” came to be—it’s about my transition from financial services to yoga, and all of the outlandish things that actually happened (and people I met!) in both worlds along the way. The bottom line (as they say in financial services) is that I love storytelling—I love hearing stories, telling stories, and laughing so hard I cry.

I was also really excited to write about some of the more-serious themes in “OM” that have been kicking around in my head for years—topics that I’m really interested in, that I want to talk about. Specifically, the way that women interact with each other—especially in the workplace—fascinates me. I was excited to explore that in the book. I was also really interested in writing about the concept of feeling “stuck” in a career that feels stifling and wrong, and then going through the process of trying to find something that feels liberating and right. It’s hard, scary work to think about what you really want to do with your life—with your one glorious, adventurous, brave life. And it’s especially scary to think about leaving the familiarity of what you know and are good at. It seems like we modern folks are so busy, it’s hard to find time to get to the dry cleaner, let alone ponder deep stuff like what to do with the rest of your life. The danger is that if you don’t take the time to dig in to that work, a decade—or several—can slip by and then you can feel even more stuck and anxious and frustrated.
I followed my pen for “OM”—to my own detriment. In hindsight, I realize I could’ve saved myself a lot of time and frustration by outlining. I aspire to be a planner for my next book.
I was surprised at the parallelisms that I found between the corporate and yoga worlds when I really went back and looked. I initially thought these worlds and the people who populate them could not be more different. I mean, major financial companies and yoga? Really? I thought the story would be in the contrast! But as I went back over my draft and edited it approximately 5,887,992 times, I started to see that as different as finance and yoga are—most prominently exemplified by wardrobe and personal commitment to deodorant and shaving—there were also surprising similarities like a fondness for using industry buzz words, flawed leadership, and unfortunate tendencies toward pretentiousness and ego.
I was also surprised by how neatly things tied up—this is real life and real people after all! But apparently, a career transition from the fast-paced, cutthroat corporate world to the unexpectedly catty, sometimes perilous yoga realm can work out…once you get over some shockingly unexpected hurdles.  Fortunately, in my transition to writing, I have not had to grapple with anyone’s craziness other than my own!
In a word: evolving. I’m new to this world. Truthfully, I got to this question and thought, “I have a writing life?” because it’s still weird for me to think of myself as a “writer.” I’m feeling my way slowly along, learning a LOT as I go, and am utterly, utterly delighted to be here.  It took me awhile to gather the chutzpah to go after what I wanted, but I’m so grateful that I did.
Summer. I love summer! Living in Boston, summers are far too fleeting (at least compared to the unrelenting winters), so I’m trying to revel in the season and really soak it in. I’m an urban gardener and right now I have crops of kale that are almost up to my waist out on the porch. I throw a few leaves into my smoothies in the morning with some almond butter, Greek yogurt, and whatever fresh, organic fruit I have on hand. I also incorporate kale and whatever other greens I have growing into whatever I cook for dinner every night. In a few weeks, the basil will be full-grown and I’ll start making copious amounts of pesto. After reading Barbara Kingsolver’s Animal, Vegetable, Miracle I started freezing it and then using it over the winter. Last year I froze about 12 pounds and I can tell you—there is nothing better than bright, vibrant green pesto in January!
I think every book—from some of the first I read (such as The Secret Garden, Anne of Green Gables, and Gone with the Wind) to every book I read now—has taught me something, whether it’s imagery, dialogue, world-building, or maybe something I’m not even consciously aware of. At some point in the Anne of Green Gables series, Anne’s teacher tells her to use small words—they’re stronger. It’s been decades since I first read that, but I still try to incorporate it into my own writing.

I first expanded into memoirs in 2005 with The Glass Castle by Jeanette Walls. I loved how honest and raw and brave that book was. After that, memoirs quickly became a substantial part of my reading diet. Jenna McCarthy’s If It Was Easy, They’d Call the Whole Damn Thing a Honeymoon (and Jenna in general) is a great example of laugh-so-hard-it-hurts humor. Kathleen Flinn’s The Sharper Your Knife, the Less You Cry is a great example of an inspirational story of one woman changing her life with a totally brave, unexpected leap. I loved how she could switch from these lyrical descriptions of Paris to the humility of getting yelled at in French (which she barely spoke) by a chef-teacher in front of a whole class. Poser by Claire Dederer is an example of artisanal writing…and the ability to tell the story of an “ordinary” life in a way that is relatable and compelling. I still love fiction—and I’ll always read it. But I am fascinated by the true stories of other people’s lives. Maybe it’s a little voyeuristic, but I always learn so much, and I’m also comforted and inspired by reading how others have struggled and evolved.

Thank you so much for hosting me on your blog--I'm honored to be here and in such good company!

I understand why yoga makes your teeth itch (LOL) and I'm thrilled that you're still willing to read about it in "OM." Now, back to that yoga breathing... ;)