Debra Dean, author of The Mirrored World, talks about following the path of a fool 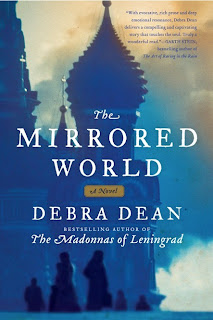 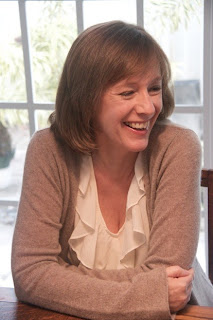 Love. Madness. 18th Century Russia. How could you not be obsessed with a novel like that? I was, and so were the rapturous critics, of Debra Dean's The Mirrored World. Dean is also the author of Confessions of a Falling Woman, short stories (2008); and her debut novel, The Madonnas of Leningrad (2006), which has been published in twenty languages. I'm so honored to host Debra here on the blog today. Thank you, Debra!

Following the Path of a Fool
Debra Dean

I’m not sure how it is for other writers, but I’ve rarely chosen the story I end up writing. I’ve tried to choose, but the stories that stick are almost always the ones that arrive uninvited and then pitch camp in my consciousness. This is how I came to write The Mirrored World.
In the course of researching my first novel, The Madonnas of Leningrad, I took a wrong turn on the internet and happened upon the fascinating legend of an 18th century Russian saint named Xenia. A member of the minor nobility and married to a singer in the Imperial choir, she suffered a great personal tragedy when she was twenty-six. In response, she began to give away all her personal possessions. Eventually she ended up on the streets in the worst slums of St. Petersburg and became famous for healing and prophecy, what is known in Russia as a holy fool. According to Russian Orthodoxy, these are people who, in order to experience the humility of Christ, choose not only to give away all they own but also to renounce worldly reasoning and to act like fools.
I had no intention of writing another novel set in Russia; I’m not Russian so it took a lot of chutzpah to do it once. But Xenia haunted me. I kept wondering ‘What kind of person does this?’ What causes a wealthy woman to give up all her possessions and become one of the homeless persons that she has served? What turns a person into a saint? Is it devotion? Is it a personality disorder?
As much as I love my stuff, I can imagine giving it up. When we moved to Miami, my husband and I left nearly all of our belongings in a storage locker in Seattle and lived without them for three years. With the exception of my Cuisinart and a few books, I found that I didn’t really miss any of it very much. When we finally bought a house here, we were faced with two equally unappealing alternatives: either have the whole lot shipped to Florida (including boxes of sweaters and down comforters) or fly back to Seattle, sort through the packed-to-the-rafters storage space, and pare down. I toyed with a third option: just stopping payment on the storage unit. What we own owns us, and how freeing it might be to simply let it go. Granted, it was a passing fantasy borne of laziness rather than saintliness, but it was a sacrifice I could envision myself making.
But to give up my powers of reasoning? I am a professor and a writer: my intellect is my stock-in-trade as well as a personal vanity. On the day that I graduated from college, a favorite professor told my parents, “She’s better when she doesn’t think too much.” All these years later, I finally understand the truth of this, but at the time it stung. I have spent all my life trying to do the smart thing or at the very least to avoid looking stupid. This was my shortcoming in my first career as an actor: to be a great actor, you have to risk being publicly foolish. I started thinking about what other gifts might be available if one were to let go of the attachment to logic. And on the other side, I wondered what it must have been like for Xenia’s family to watch someone they loved behave like a mad person.
Once I start thinking this way, I know my course is set. It doesn’t matter what plans I have made for my life, the story is in charge now and for the next few years I will follow it.