The sublime Hilma Wolitzer talks about the second life of books 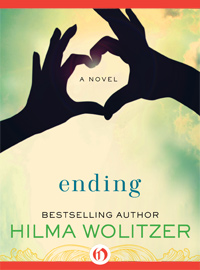 You know that heady feeling when you read an author's book and you love it so much you want to find all of his or her other works and devour them, too? But sometimes an author's backlist is not in print. Thanks to Open Road Media and Dzanc Books rEprint series, that's changing, and I was thrilled to see that Hilma Wolitzer's early works are now coming back out as ebooks.

I don't remember when I first met Hilma, though certainly I've followed both her and her daughter Meg, through their books for--well, forever. And I was thrilled to be able to meet both of them at an event I did at the wonderful Center for Fiction. I'm so honored to host Hilma here and even more thrilled that lucky readers can now snap up her backlist!  Thank you, Hilma.

I love a book in hand—an actual, as opposed to a virtual, book—as much as anyone.  Almost forty years ago, when the first copy of my very first novel, ENDING, arrived at my house, a process that involved the post office, I was thrilled by the heft of it, the heady scent of paper and glue and ink, the fact that my book looked and behaved just like all those other books by known writers when I placed it among them on a shelf.  And there was a permanent aspect to it.  Nothing as grand as immortality—my children and eventual grandchildren would provide a version of that—but my book still seemed final and lasting.   That was before I learned about bookstore shelf life, about returns and remaindering and shredding.  Before I came to fear that every cushion I sat on might have been filled with the confetti of one of my novels.

ENDING received some wonderful reviews, but like most books that don’t become classics, it soon went out of print, out of sight, out of mind.  I wrote several others that met the same fate, as new writers and new books kept coming up like chorus girls.  Then, recently, Open Road Media resurrected all my seemingly perished novels as ebook downloads.  It’s true that you can’t heft them, you can’t smell the paper or the glue or the ink, or even slide them onto a shelf.  But the words and the characters and their stories are still here (or here again), and maybe I’ll find some new readers for them.  All these years later, many of the original ones are probably dead.

I’m old now and a little cranky, so I didn’t come to digital technology easily or willingly, but I embrace (or at least air-kiss) it for the second life it’s given to my forgotten books and to so many books I’ve loved by others that have fallen out of favor.  I even own an e-reader myself, a not-so-guilty pleasure, and tonight I’ll read with considerable joy by its tiny rechargeable light.
Posted by Caroline at 1:05 PM

I was very pleased to find this site.I wanted to thank you for this great read I definitely enjoying every little bit of it and I have you bookmarked to check out new stuff you post.
Urdu Novels PDF