David Samuel Levinson talks about his brilliant debut, Antonia Lively Breaks the Silence, writing towards the end, social media obsessions, and so much more 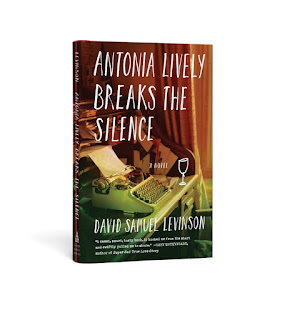 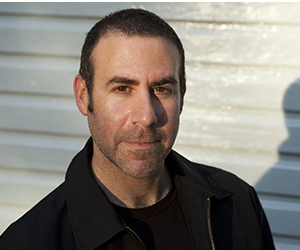 David Samuel Levinson isn't just brilliantly talented, he's also hilarious. I'm thrilled he's another Algonquin writer, because that means I get to see and hug him at Algonquin parties and events, and it gives me carte blanche to email him incessantly to talk about writing, life, art, and desserts. His novel Antonia Lively Breaks the Silence is an extraordinary, shocking, funny novel about writing, art, fame and mystery--and it's fantastically good. I'm so thrilled to have him here on my blog. And New Yorkers, go see him at Word on June 6th, and at a lot of other terrific places, too.

Your novel deals with literary critics, how they can make or break novels. It's probably a little unfair of me to ask this, given as your novel will be out in the world, but how do you feel about literary critics? About user reviews from places like Goodreads and Amazon? (And by the way, as a book critic, I have a policy of not reviewing books that I dislike. I just think I'd rather spend the real estate on books I love rather than trash ones I don't. No one deliberately sets out to write a bad book, after all.) Except maybe James Patterson writers!

I love literary critics! I don't always agree with them and I'm sure I won't agree with a lot of what they say about my novel, but they're readers just like anyone else—though it seems that they're also the kind of people who look for flaws. My favorite critics are those who have no connection whatsoever to the publishing industry, who aren't invested in giving a good or a bad review. I just got an incredible endorsement from a librarian at a middle school in El Paso. It was the most amazing review I've seen of my novel to date. She really just got the whole thing, all of it, from beginning to end. No one's mentioned how the novel's framed, but she did. She didn't give anything away, either. I love this woman. She's my ideal reader. And as for user reviews—I say the more the merrier. We put our work out into the world to be talked about and discussed, to raise issues, etc. I'm just happy that people are talking about Antonia Lively. Whether it's favorably or unfavorably is totally out of my hands...

What I loved so much about the book is the pitch perfect unfolding of what it means to be a writer: the pain of knowing you are good, but being ignored has; the way a bad or good review can either derail or elevate you; and the sometimes unfairness of advances! In your opinion, where do you think publishing has to be heading?

When I started to write the novel, back in 2003, publishing was still very much the way I portray it, I think—lots of enormous advances, a sort of primeval infrastructure, etc. Today, I think the industry is much better situated and poised to continue to do great things and put out excellent books. There's never been a dearth of quality but there has been a dearth of support for marginalized writers. I hope that as the world around publishing continues to change that the industry leaders will take note and perhaps lose some of their trepidation about taking risks on new writers. From various sources, I still hear that books aren't selling, though I'm not sure this doesn't come out of the mouths of alarmists. People will always read. People will always buy books no matter what form they take. I'm thrilled about the ebook revolution and even about self-publishing. Level the field, I say, and everyone wins.

Your novel also talks a lot about the thin line between fact and fiction and where stories actually come from. "Good fiction lies to get at the truth," one character says. Can you talk about this whole idea? Do you think it's true? How hard is it to stay close to the truth when your own subconscious needs/wants get in the way? And is that necessarily a bad thing if the goal of writing is to explore and express your own inner truth?

My thought about the thin line between fact and fiction has shifted over the years, especially as I came to understand, more fully understand, each of the characters and their own relationship to the truth. Truth, like memory, is never static and is always correcting itself. What we think we remember is often very different from the way an event unfolded, though as writers, I believe that it's our jobs to record as much of the facts as possible. Does good fiction lie to get at the truth? To be honest, I'm not so sure. Good fiction is one long elaborate lie, yet this lie can be more genuine, more real, than the truth could ever hope to be. To me, every story ever told is a fiction, mainly because it's completely unverifiable—unless of course you're sending sexy naked pictures of yourself to someone else, etc. Then we have fact, which cannot be altered. Antonia's truth is very different from Catherine's truth and Catherine's truth is very different from Henry's, etc. If every character experienced the same event in the same way, well, that'd be a profoundly boring book. Luckily, each character came to know his own truth, and in this way came to also know his own nature. The only thing I did for them was to act as a kind of midwife for their stories.

The novel keeps unfolding layer after layer of character while keeping the tension tight--something I deeply admired. Can you talk about your writing process? Do you map your novels out? Are you a big rewriter? What's your writing life like these days?

I wish I had a writing process right now! I just finished teaching a 3/3 load and found that I couldn't carve out any writing time. It's not that I didn't have time to write, it's just that teaching tends to take a lot of emotional energy, energy that usually goes into my work. When I can carve out time, I need only two things: a desk and absolute quiet. I cannot be distracted in any way and have to live in the dream I'm creating or it just won't work. The mornings are best, when I'm still cocooned within the dream and I haven't spoken to another human and I haven't left my house. I think this is vital for a writer—to maintain that sort of distance from the reality of which he writes. I've also never been the kind of writer who outlines his stories, though I always have a vague sense of where they're going.

In Antonia Lively, I wrote toward the end, which, in previous versions, was a conflagration a la Jane Eyre. Then, in one of the last revisions, I realized the fire was unnecessary, that it tipped the scale of the novel. So I reined the fire in, cut it out, and what was left was more manageable and credible, for me and the reader, I think. I rewrote the draft of Antonia Lively that would later be sold over a ten-day jag, yet I did umpteen revisions of it throughout the next couple of years. At one time, it was a first person-third person novel, but the first person never quite worked and my editor suggested I just turn the whole of the book into third, which I did. It was the right decision. Yet I always missed that first-person confessional, that closeness, and thus the prologue and epilogues were born. Right now, I'd love to say that I've completed another novel and that it's on its way into production, but the process of writing Antonia Lively and getting it published has taken a lot out of me, emotionally and physically.

As a writer, I need to be incredibly inspired by what I'm writing and right now I'm lying fallow, waiting for that moment again. I'm working on stories in the meantime. I think eventually these stories will become a novel of linked stories, but only time will tell. The first one of them will be published by Post Road and is called "People Are Just Dying to Meet You."

What's obsessing you now?
My obsession with social media is obsessing me right now. I'm not sure when I just gave over to it, but it seems I have. I live a pretty peripatetic life, hopping from one teaching gig to another, so sometimes the only interaction with my friends I have is on FB or Twitter. I'm not saying that this is necessarily a bad thing in and of itself. All I'm saying is that I was never the kind of person to check FB or Twitter all that often. I'm hoping that I can unplug eventually, set down some roots, and become less tied to the Internet.

You asked great questions, Caroline! But in the spirit of your question, I will say that you might have asked me where the story of Antonia Lively came from. Since you didn't, though I know you wanted to, I will tell you that it came from a chance meeting at a small cafe in Brooklyn. It was early January of 2003 and I went to a cafe to do some work. I set up my computer at a table near the door—the other tables were taken—then went to get a cup of coffee. When I returned, a young Latino man was sitting at my table. I was irritated. He asked me if I was a writer. I muttered a surly yes and hoped that was the end of it. But it wasn't. He went on to tell me that he had a great story to tell me and that someone needed to write about it. "Tell me," I said. And he did: he told me about a man in Brooklyn who killed a girl with his car. He was drunk. He knew the family. Instead of going to jail, however, the parents of the girl settled with him out of court. I can't tell you what the settlement is because it became a part of the fabric of the novel, but suffice to say I wrote down that story, then found it months later. It became the germ out of which Antonia Lively sprung.
Posted by Caroline at 8:35 AM