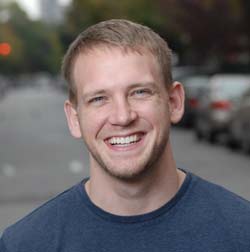 I first met Alan Corey when his first book, A Million Bucks By Thirty, was sent to me. What instantly snagged me was the irreverent tone, the whoppingly good advice, and the astonishing fact that Corey, at 22, managed to pull this off. (It took him six years, but still.) He's funny, smart, and a damn good writer, and I think I'd promote his grocery list. Thanks for being here, Alan!

\     Alan Corey’s new book “The Subversive Job Search” is not just creative advice for finding and furthering a career, it also has creative style.  Don't believe me? Take a gander at it from an author’s perspective.

Unique Dedication – The dedication of “The Subversive Job Search” at first glance seems simple, stating “This book is dedicated to you.”  But an aside on the following page requests the reader to not tell his sister Jill about the book, so that she doesn’t have a book dedicated to her.

What looks like a simple joke at his sibling’s expense,  is also a call back to Corey’s first book “A Million Bucks by 30”, where he also “not-dedicates” the book to his sister.  She’s most likely the first person to have not one, but two, published books not dedicated to her. Corey single-handedly created his own material for gaining the upper hand in some sibling ribbing.

2.     Opening line –The Bulwer-Lytton Fiction Contest is an annual contest challenging writers to write the worst opening line for a novel. The namesake, Edward Bulwer-Lytton, is infamous for his long-winded opener: “It was a dark and stormy night; the rain fell in torrents — except at occasional intervals, when it was checked by a violent gust of wind which swept up the streets (for it is in London that our scene lies), rattling along the housetops, and fiercely agitating the scanty flame of the lamps that struggled against the darkness.”

Miffed that the contest is only limited fiction, Corey purposely wrote the worst opening sentence that he could in his latest non-fiction installment. (You’ll have to check out the book to read it.) Luckily the bad writing stops after line one.  Maybe now there will be a new contest for non-fiction writers trying to top Corey.

3.     Inventing Words – Corey calls out on occasion when we invents new words. For example, bosse, which he defines as a posse of bosses huddled in the workplace.  Like any creative author, Corey doesn’t let the dictionary limit his choice of words, whether it is inventing his own office place vernacular or coming up with tongue-tying curse words.

4.     Writing Constraints – The most writerly aspect of the book is that “The Subversive Job Search” is a lipogram. A lipogram is a piece of work that purposely avoids using certain characters, and his book does that by dancing around the letter z.  Not only is that harder than it sounds, but it’s also another nod to fiction-only works as his book is now the only non-fiction lipogram ever published. Corey has introduced his own challenges to writing to keeps things interesting not only to readers, but to himself.
Although Alan Corey’s career guide has writerly aspects that authors may enjoy, it does not distract readers from the book. “The Subversive Job Search” stands alone as a great offering to job hunters and those looking to further their career and incomes. Many of the writerly items mentioned here would go unnoticed to most casual readers, which is the perfect way to make things fun for the eagle-eyed writer types.  The book is in stores now.
Posted by Caroline at 8:50 AM