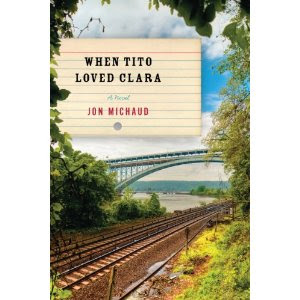 I love books that set me down in a world that's so supersonically alive, I swear I could map it in my sleep. I carried Jon Michaud's blazing When Tito Loved Cara with me all over New York City, because I couldn't bear to set it down. About culture, family and the impact of the past on the present, it's a stunner from page one on. Besides being a fantastic writer, Jon's also the head librarian at The New Yorker and a regular contributor to thenewyorker.com, (and also another Algonquin writer), and I was thrilled to be able to talk to him about his book. 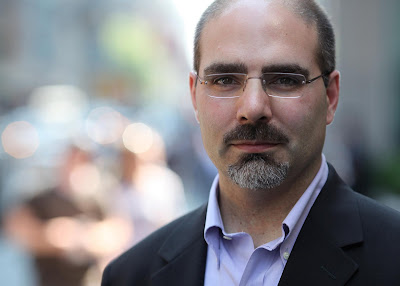 What I loved so much about your book was that it wasn’t just a love story between people, but a love story about culture, family and community—which sometimes is a more star-crossed lover than a person. Could you care to comment on this?

Sometimes I think my whole life has been one long cross-cultural love story. My father was diplomat and we lived in a number of turbulent foreign places when I was a child: Iran, India, and Northern Ireland. I think that the recurring experience of not being a native-born member of the cultures in which I grew up made me especially aware of the conflicts that immigrants and exiles face within themselves and within their families and communities. Those insider/outsider conflicts can be seen in almost every neighborhood in New York City (witness the controversy over the Park51 Islamic community center)—and in plenty of neighborhoods around the country.

Many wonderful books, from Saul Bellow’s “The Adventures of Augie March” to Jhumpa Lahiri's “The Interpreter of Maladies,” have chronicled those conflicts, too. In my case, I had the good fortune to wind up living in northern Manhattan in the late 1990s and to marry into a vibrant Dominican-American family. The stories my wife and in-laws told me and the stories I heard around the neighborhood resonated with my own childhood experiences of being constantly out of place and fed into the novel that became “When Tito Loved Clara.”

Clara has assimilated into a new life, but when Tito comes back, things disrupt, making everyone question choices made or unmade. Do you think we can ever escape our past or our culture—and should we?

It’s always a trade-off, isn’t it? You have to give up something in order to gain something. For some people, success means completely reinventing yourself by shucking off the culture in which you were raised; others seek to strike a balance between old and new, assimilating enough to function in the new world while still honoring their origins. The novel deliberately explores the gamut of options, from someone like Clara’s father, who has hardly assimilated at all—he won’t allow his children to watch English-language television—to Clara herself, who sees it as her mission to have the colonial in the suburbs, a white-collar job, and nice china on her table. There’s no single right answer for everyone, as Clara comes to realize at the end of the book.

At the same time, I also wanted to look at the question from the other side and ask how Americans are assimilating to immigrant cultures. Like it or not, each new wave of immigrants changes the country in ways that are both subtle and not. That's why I felt it was important to include the chapters written from Thomas's perspective.

The portraits here, from Clara to Tito to Deysei to Raul, were so indelible and so crackling with life. How do you go about shaping character and what surprised you as you were writing?

I'm an improvisational writer. I don't work from an outline. I never know what's going to happen when I sit down at my desk. Writing a story or a novel is, for me, a slow and stumbling process of discovering who my characters are. This process of writing aspires to mimic the surprises and revelations that a reader experiences.

Clara and Thomas began as an alternate-reality imagining of my wife and myself. They provided me with a way of saying, “What if such and such was different…?” or “What if this or that happened to us…?” The problem was that my wife and I live a blessedly mundane life, a life nobody would want to read about, so I felt compelled to alter those alter-egos in order to make them more interesting. But still, there was no real narrative to the novel until Tito came along. He is the engine who drives the plot. Tito, who is a complete fabrication, arrived almost fully formed—a rarity for one of my characters. He ended up being a kind of litmus test for everyone else in the book. Many of the other characters didn’t come into focus for me until they'd encountered Tito and reacted to him.

I also loved all the library details of Thomas’s life, especially the term, “knowledge manager,” which means I now get to ask you about your job as head librarian at the New Yorker. What’s that like?

The early editors at The New Yorker recognized fairly presciently that they would need a library and archive and they hired two skilled librarians, Ebba Jonnson and Helen Stark, who put into place many of the practices my colleague Erin Overbey and I still use today (though, certainly, a number of those practices have been updated to keep pace with the times.) It's a privilege to work in the library that Jonnson and Stark established and to serve an institution that values its history as much as The New Yorker does.

Working there has also been the perfect dovetailing of my professional and vocational interests. It is hard for me to imagine a better way of learning how to write (and edit) than reading The New Yorker each week as it is prepared for publication—that is, really reading it, with a view to indexing and abstracting the articles and stories. It may sound counterintuitive, but I'd say that I've learned at least as much from the longform journalism in the magazine as I have from the fiction it publishes.

I was also really fascinated by how the details Thomas finds in the library reveal to him the inner workings of a man’s mind—ie. that one particular client wants control. So you can tell a person by their covers (i.e. books?)

I've spent almost all of my adult life working in libraries and bookstores, so I am endlessly curious about what people are reading. At parties I will invariably wander away from the conversation in order to scope out the host's bookshelves. On trains and at the beach, I'm less than subtle about checking out the covers of other people's books. My main complaint about e-readers is a selfish one—that they prevent this kind of casual snooping.

Having said that, I'm not sure that the books on someone's shelves will tell you everything about them. A lot of people carefully curate the titles on display in their homes. How do you know they don't have another set of completely different books down in the basement or up in their bedrooms? How do you know they've even read the books they're showing you? On the other hand, if you had unlimited access to all the ephemera that surrounded someone’s reading (marginalia, diaries, etc., as Thomas does in the novel) then you might really be able to learn something. Or perhaps you'd learn just enough to fire your imagination.

So much of your novel is about yearning for a better or maybe the better way of saying this is--a different life. Thomas years for a glittering NYC life, Clara for a baby, Tito for the Clara of his youth. But these struggles for the life they want vs. the life they have take a toll. Do you ever think it is possible for the real and dream life to merge?

Well, I suppose there’s a reason it’s called the American Dream and not the American Reality. I think it's human nature always to be yearning for something you don't have or something you feel that has been denied you. Isn't that what drives people to leave their homes and move to a new place? (Robert Olen Butler has argued that yearning is the key to fiction.)

Contentedness is not far removed from complacency. I'm always interested in the way that desire and longing manifest themselves in people’s lives. If you're not careful, or if you’re unable to recover from a few setbacks, you can end up like Tito, whose life is overwhelmed with unconsummated yearning. By the end of the book he can no longer tell what is real and what isn’t.

I am working on a book about Northern Ireland set in the early nineteen-eighties. It began as a memoir, but I found that sticking to the facts was a major inconvenience (I don't know how reporters do it), so it has lately morphed into a novel-in-progress. When not working on that book, which requires a fair amount of research, I've been plugging away at some short stories, which are mostly set in the same milieu as “When Tito Loved Clara,” and require no research at all. Being able to go back and forth between those two projects is beneficial to both, I'm finding.

There were a number of books that served as guiding lights for me as I worked on “When Tito Loved Clara” and I would welcome any opportunity to acknowledge my debt to them: Edith Wharton's “The Age of Innocence,” Zadie Smith's “On Beauty,” Jay McInerney's “The Good Life,” George Pelecanos's “Drama City,” Edward P. Jones’s “All Aunt Hagar’s Children,” Junot Diaz's “Drown,” Tom Perrotta's “Little Children,” and Richard Ford's Bascombe trilogy.