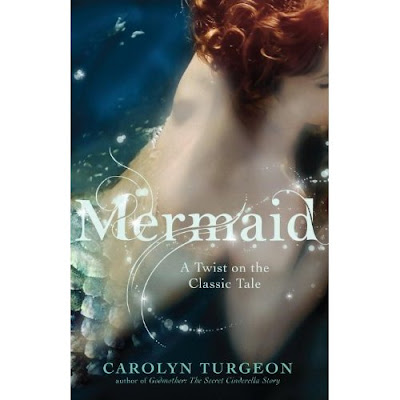 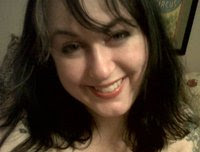 “A gothic love triangle with two equally matched heroines. This isn’t kid’s stuff.”—Kirkus Reviews. Now, how could you ask for a better review than that? Mermaid is indeed nothing like what you would expect, and either is author Carolyn Turgeon. I'm thrilled she agreed to talk to me about her twisty new tale.

What do you think our fascination with mermaids is really about?

Well, mermaids are very very strange. They’re unbelievably beautiful, yet grotesque and monstrous. They’re incredibly sexual with their long hair, bared breasts, and hourglass shapes, not to mention those gorgeous, magical voices that can lure sailors to their deaths, yet they’re FISH from the waist down and have no genitals… which makes them seductive and unattainable in an unusually literal manner. They hang out on rocks looking pretty and staring into mirrors and they also swim in the deepest ocean, in these weird dark parts of the world no human has ever entered. So they’re linked with mystery and death and birth and everything we don’t know but long for and fear. They’re accessible monsters and totally inaccessible ladies, at the same time. They’re death and sex and the ultimate feminine. And they’re everywhere! Once you start looking, it’s sort of astounding how ubiquitous they are, in film and art and pop culture generally, and all over the world, and for hundreds of years. I think it’s pretty clear that even a super whitewashed mermaid like Ariel taps into some kind of dark unconscious longing in us.

You've written other books which twist on popular tales. What generated this? Did you grow up on these stories? Have the meanings of stories like Cinderella changed for you throughout the years?

I definitely grew up on these stories, though more through Disney movies and Little Golden Books than the Grimm Brothers or Hans Christian Andersen. But even the more sanitized fairytales retain some of the darkness of the originals, which can get unbelievably weird and twisted, and I always liked that combination of beauty and magic with those darker elements. I’m sure that over the years I’ve become more critical of the Disney films, which were just pure delight for me when I was a kid. You know, the idea that the abused, damaged Cinderella could be whisked away by a prince and magically healed, or that this little mermaid could give up her voice and tail—her entire world, in fact—for a hot stranger, and that that could possibly end happily. So of course those things don’t happen in my books, but I’ve been even more interested in exploring the female relationships in these stories, like between Cinderella and her fairy godmother and between the little mermaid and her human counterpart, the princess who ends up, in the original story, marrying the prince.

In this novel, you really combine the magic qualities with the real ones. Was it hard to meld the two?

It wasn’t hard, actually. I knew that if I was going to write about mermaids and an underwater kingdom and a sea witch and all that, I would have to make them as real as possible—to transport the reader into a world as vivid and multi-dimensional as possible—and that I would also have to make the real, human world as gritty as possible, for contrast. I really love that contrast. I think the more grounded you are in a real world and setting, the more magical it is for the reader to suddenly enter a totally fantastic one. Both Godmother and Mermaid start out in real worlds and then move into fantastic ones, and alternate back and forth, so for both books it was crucial to have that contrast be as vivid as possible.

Plus I think that the fantastic is always better as a surprise. In the first chapter of Godmother, we follow an old woman in New York through her day, as she works in a West Village bookstore, as she walks home through Chelsea and to the Garment District and up the stairs to her old, worn apartment… and then as she draws a bath, relaxes into it, and spreads these beautiful white-feathered wings. That’s the kind of magic I like, that sneaks up on you.

I love that you say the novel "will change your life." Tell us how, please?

Well, I might possibly enjoy the use of slight exaggeration and hyperbole on occasion, but I do think that books change lives, even if in subtle, sneaky ways. Like when you take a narrative that you know, from childhood, that’s part of you, and go in and root around in it and then offer it up from an entirely new point of view, illuminating parts that were hidden and/or revealing new possibilities. I think that changes something. And you know, when a butterfly flaps its wings in one place….

Plus: I suspect my book will change lives out of its sheer awesomeness. People will reach for it at the same time and fall madly in love. They will buy my book and then win the lottery that night. They will see shooting stars and rainbows, get raises and promotions, take fabulous journeys, have breakthroughs in therapy, wake up 10 pounds thinner. They may not make the connection directly between my book and their newfound joys, but that’s how chaos theory works and I can accept that.

Well, a few things are obsessing me, but mainly, right now, it’s mermaids. Not because of the book, really, but because of this idea I had and may regret having to start a mermaid blog. You see, I was staying in Berlin this past fall and doing some travelling, and I visited Denmark to pay homage to Mr. Hans Christian Andersen and took all kinds of video and photos and learned all kinds of weird things about him. Then I went to Warsaw to see Leonard Cohen and discovered, totally by accident, that the symbol of Warsaw is the mermaid and has been since the middle ages, and so I took more photos and videos and learned all this weird stuff. I have a friend in Berlin who performs as a singing mermaid, so I filmed her and interviewed her.

It occurred to me that I should DO something with all this stuff and eventually I decided to start a mermaid blog, iamamermaid.com, and THEN I started asking people if I could interview them about mermaids, all kinds of people, people who’ve done anything at all relating to mermaids, and suddenly I’m seeing how many people, and people of all stripes, have done something related to mermaids, and I was surprised at how many people said yes and actually wanted to talk about mermaids—like I almost fell over when my one true love Tim Gunn said yes—and I’m finding out all kinds of weird things about mermaids myself. Suddenly I have tons and tons of material and keep finding more.

I found a professor who teaches a course on mermaids at Wellesley and visited him last week. I’ve been talking to tons of former Weeki Wachee mermaids, including two who performed for Elvis in 1960. I’m talking to the spokesperson of a town in Israel that made world news last year when mermaid sightings were reported and the mayor offered $1 million to whomever could photograph a mermaid. And on and on and on. For a few weeks I just became madly obsessed. Now I’m trying to keep it in check a bit so I can get some other work done, too!!

I’m starting the blog January 1 and posting something awesome every day for a year, so I suspect I will be obsessed for a while. And I’m quite sure that at the end of the year, I will never want to talk about mermaids again.

Well. You really should have asked me about my lovely children’s book, tentatively titled The Next Full Moon, coming out next summer. I know it hasn’t been officially announced yet since we are signing contracts next week, but still. How rude. It’s about a 12-year-old girl who, amidst the embarrassment of suddenly growing feathers, discovers that her mama was a swan maiden. And it will change your life

I have no doubt that Carolyn's books are the reason for my outlandish successes.

I've read a few good stuff here. Certainly worth bookmarking for revisiting. I wonder how a lot effort you put to make any such wonderful informative site.

Take a look at my web page click here