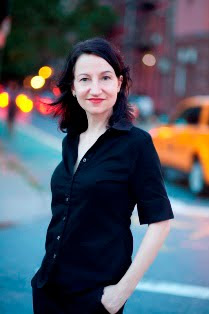 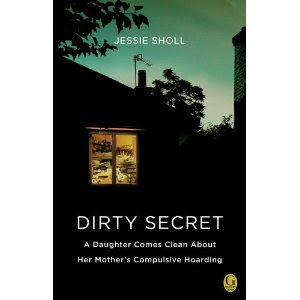 Trust me, you have never read a book like this. I'm so honored to have Jessie Sholl here, and I am mortified that I muffed my day to post this (I had a family emergency.) But here it is, and thank you so, so much Jessie.

Thank you so much, Caroline, for letting me do a guest blog post. As a longtime reader, I’m very happy to be here! I’ve decided to do a Q&A with some of the questions I’m often asked about my memoir, Dirty Secret: A Daughter Comes Clean About Her Mother’s Compulsive Hoarding—on sale December 28, 2010.

What made you want to write this book?

Dirty Secret began—in my head, anyway—about seven years ago, when I happened to tell my husband about how I used to stare out the windows of my elementary school when I was ten; I’d gaze back and forth between my mother’s house and my dad and my stepmom’s, and have very different visceral reactions when I looked at each house. It was just a short anecdote, but as soon as I was done he said, “You know you need to write about this, right?” which of course I laughed off. I couldn’t imagine ever telling anyone besides him about my mother being a compulsive hoarder.

Then, a few years later, I joined the Children of Hoarders support group; the shame and embarrassment we were all carrying around began to seem ridiculous. And unnecessary. I hoped that by “coming clean,” about my mother’s hoarding, the secret would lose its power. And that scene about looking back and forth between the two houses ended up being the first one I wrote for the book.

In recent years, the concept of hoarding has gone mainstream, thanks mostly to television shows like Hoarders and Hoarding: Buried Alive. What do you think about the presence of compulsive hoarding in national media and pop culture?

Overall, I think the television shows about hoarding are a good thing. Occasionally they can feel exploitive, but I like the fact that people are beginning to understand that compulsive hoarding is a mental illness and not laziness or selfishness, which is what some people used to think. The stereotype of the crazy cat lady is beginning to seem as outdated as the “hobo with the knapsack,” and that’s great.

At one point in the book, you mention that other people reacted positively when you told them about your mother’s disorder. Did this surprise you?

This did surprise me. The most rewarding part of writing the book so far has been those moments when someone tells me about their mother, brother, cousin being a hoarder; every time I hear it I feel less freakish and it seems that the person does as well. I also really appreciate the fact that no one has ever judged me harshly. Maybe that expression is true: all our secrets are the same. I only wish I’d known it earlier, because I spent way too long being ashamed of something that didn’t warrant it.

For more information about Dirty Secret, please visit www.jessie-sholl.com/blog. You can watch a trailer for the book here:http://www.youtube.com/watch?v=J78T_KgvqcU.

It's appropriate time to make some plans for the long run and it is time to be happy. I've read this submit and if I may just I wish to recommend you few interesting things or
suggestions. Perhaps you can write subsequent articles relating to this
article. I want to read more issues about
it!