Read this Book: A Fortunate Age 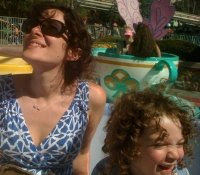 A Fortunate Age by Joanna Smith Rakoff is today's The Group, only instead of Vassar, Rakoff gives us six Oberlin graduates struggling to find themselves and their fortunes as artists and academics in Manhattan. What's not to love?

Many years ago, you were a book reviewer. How did years of being a book critic inform your own novel? Did it affect what you wanted to accomplish with your novel?

It’s funny, because I began writing book reviews—and author profiles and suchlike—as a way to support myself while I wrote fiction and poetry, but for a few years it actually prevented me from doing so, partly because I was so busy. When you’re always on deadline, it’s hard to find space in your head to develop characters and stories (much less the intricate rhythms of a poem). But mostly reviewing made me excessively aware of the pitfalls of fiction, as well as the clichés of much contemporary fiction. As a critic, you’re reading analytically—trying to suss out the writer’s larger project and influences—but you’re also examining the nitty gritty of how each book works (or doesn’t work). At first, I think, this scared me away from fiction, as I realized how easy it is to fail. Or to simply to write a mediocre, first-person coming-of-age tale (I reviewed many of those). But eventually it helped me figure out exactly what I wanted to do with these characters I’d been writing about, loosely, for years. I was able to figure out the sort of tone I wanted for my omniscient narrator (slightly grand and Forster-ish, but intimate) and the sort of scope I wanted for the novel itself (large). In other words, I was able to think a bit more consciously about my work than I had been.

But my work as a critic also shaped the novel in that it led to a frustration with contemporary fiction, in general. As a young, female reviewer, I was often assigned novels and collections by my peers—women in their twenties and early thirties—and as the years went by I began to think about the similarities between these works, some of them wonderful, some awful, but most of them somehow small in scope. With some big exceptions, like Zadie Smith’s brilliant White Teeth or Donna Tartt’s The Little Friend or Jennifer Egan’s Look at Me, or, more recently, Claire Messud’s The Emperor’s Children, the novels I was reading by women lacked a certain breadth and ambition (even if what they achieved, in miniature, was wonderful). I kept waiting for a novel like, say, The Corrections to cross my desk—with a woman’s name below the title—but it didn’t. So, to an extent, I wrote the novel I wanted to read.

A FORTUNATE AGE is loosely based on Mary McCarthy’s The Group, and while there are plot similarities, there are also some pretty big differences, especially in terms of tone – while McCarthy’s book is a biting satire, your treatment of your characters is more gentle. Why are you kinder to your characters?

I think the big difference between McCarthy’s (great) novel and my own is that The Group is ultimately a comedy—at the end, the status quo is affirmed—whereas mine is, really, a tragedy. Many characters have achieved some semblance of security or happiness, but much has been lost along the way: their ambitions, their integrity, their hopes. In the larger sense, I suppose I’m not actually kinder to my characters, for things don’t work out quite as well for them. Or, perhaps, they’re slightly more self-aware than McCarthy’s characters, which means they’re doomed to unhappiness.

How would your novel be different if it was set in New York City today, rather than the internet boom New York City of the mid 90s? Do you think your characters, who are academics and artists, would be more or less determined to pursue their artistic and intellectual goals in this very different economy and world?

In some ways, I think the novel is completely rooted in the boom economy of the late 1990s and that twenty-six-year-olds moving to New York today are very different, that they’ve been spoiled by the lushness and ease of the past decade. But in a way, everything has come full circle and once you get past superficialities—Facebook, skinny jeans, etc.—there are perhaps more similarities than differences between Generation X and Y (or whatever you want to call them). We both grew up under the shadow of deeply conservative administrations. We both graduated from college into a recession. And, really, the twenty-five-year-olds in my midst—and there are quite a few—seem just as intellectually ambitious as were my friends at that age.

But also many people of older generations have read the novel and said, “This reminds me of when I moved to the city. I went through similar things.” And they moved here in the 1970s or 1980s. I think much of what the characters go through is somewhat universal.

That said, my novel definitely is very much about a specific chapter in New York’s history. In the mid-1990s, the city transformed itself—both in reality and in the world’s cultural imagination—from a crime-riddled, graffiti-scarred urban wasteland into a gentrified, tourist-friendly playland. My characters are very much part of that transformation.

How autobiographical is your novel? Are the characters based on real people? Is one of them based on you?

The novel is completely fictional, though certain incidents in it certainly bear a resemblance to things that have happened to me. I’ve certainly seen a few relationships similar to Lil and Tuck’s, and I’ve seen numerous actors go through struggles similar to Emily’s, and so on. There are little bits of Oberlin lore in it, which are pretty much real, like the mention of someone baking a bread coffin and eating her way out of it. That was my closest friend’s final project for her performance art class. Or the guy who made plaster casts of his penis and planted them in the garden outside the Conservatory.

Your book is set in Brooklyn in the mid 90s. How has the borough changed since your characters lived there?

Brooklyn, more than any other part of the city, was affected by the boom economy. When the novel begins, the neighborhoods in which my characters live—Williamsburg, Carroll Gardens, Cobble Hill—are slightly depressed, marginally dangerous, working class enclaves, with little pockets of artists and writers who had been priced out of the East Village, Brooklyn Heights, etc. The high streets in both areas—Bedford Avenue in Williamsburg; Smith and Court Streets in Carroll Gardens and Cobble Hill—were largely home to drug-front bodegas and liquor stores encased in bullet-proof glass. Today, those streets—and many others in the areas—are lined with bistros and boutiques, over which tower dozens of new condo developments. Both areas are now primarily home to affluent young families. Most of my friends still live in both those neighborhoods, thanks to rent stabilization, and feel that things have gone too far. They now feel out of place among the hedge fund managers or what have you. It’s an old story, of course. The same thing happened to the West Village and Soho in the 1980s. But if my characters were to move to the city today, they’d likely be moving to Bushwick or Bed-Stuy or Crown Heights.

One of the best parts of your book is the relationships between your characters and their parents. Did your own relationship with your parents inspire these sections of the book?

Yes. My parents are of the same generation as the Peregrines—they grew up during the Depression and World War II—and my relationship with them was, from what I could see, rather different than those of my friends who were just one generation removed from their parents. I was always very aware that my parents possessed a different set of values than the other parents I knew. And because I came along so late in their lives, they treated me more like a mascot than a kid. After I was born, they didn’t really adjust their lifestyle much; they simply took me with them. We traveled frequently. We had late dinners at Hungarian restaurants that specialized in calves’ brains. I was expected to just entertain myself when I got bored and I usually did so with a book.

But it led to my feeling very close to them. As a kid and a teenager, I spent perhaps too much time thinking about my parents—the lives they lived before I came long; the selves they kept hidden from me (and why they chose to do so)—and about how they’ve shaped me. And how they were shaped by the eras in which they came of age. My mother, right now, is sick with worry about the recession. She lived through the Depression. She knows how bad it can get.

What was your first job when you moved to New York?

My first real job was at a grand, storied literary agency, Harold Ober Associates, where I was the assistant to the president, a grand, storied lady named Phyllis Westberg, who was wonderful to me – if a bit scary, at times – and gave me more responsibilities than, perhaps, she should have, which really allowed me to learn about the publishing industry and literary culture, in general. I'd just dropped out of a Ph.D. program and still thought, rather pompously, of myself as a scholar, which made Ober a great place to work, as they were primarily known, at that time, for the estates they represented: Dylan Thomas, Langston Hughes, Agatha Christie, Ross MacDonald, Anna Kavan, and tons of others. But perhaps the most interesting and strange part of my job was answering J. D. Salinger's fan mail. Salinger, a longtime client of the agency, received tons of mail, as you can imagine, much of it very personal and strange, and much of it from teenagers who had formed a sort of hysterical identification with Holden Caulfield. I was supposed to send a form letter to each and every Salinger fan, but over my time at Ober I began personalizing letters and -- it's bizarre to think about it now! -- entered into a correspondence with a few of them. I actually still have some of my favorite letters from that time (which are supposed to be filed away somewhere in the Ober archives...).

Loved hearing about Brooklyn and its changes--and that image of eating Calves brains...ugh, but pungent! How many fan letters did Salinger get per week? Do you remember?