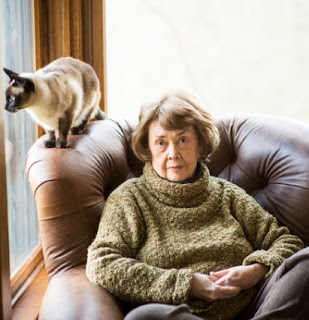 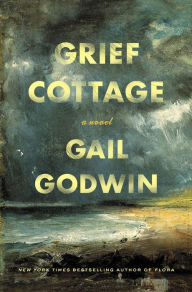 "I've long thought of Gail Godwin as a present-day George Eliot — our keenest observer of lifelong, tragically unwitting decisions.”
—John Irving
Can the needs of the living and dead sometimes merge? Eleven-year-old Marcus’s desire to believe so leads him, and us, on a harrowing and unforgettable journey toward an answer. Grief Cottage further confirms that Gail Godwin is one of our country’s very finest novelists.
—Ron Rash

It's amazing when you love the author as much as you love her books, isn't it? One day, a few years ago, I got a call. Gail Godwin, whom I didn't really know,  wanted me to have lunch with her, her publishing people and Emily St. John Mandel. Of course, I was thrilled and excited and honored, and the lunch was spectacular. But what I loved the most was how open, and thoughtful Gail was, how fascinating. And I left that lunch glowing, and I am so grateful that Gail and I became friends.

Her accomplishments are legendary. She's written 14 novels, two short story collections, three non-fiction books, and ten libretti. Her primary literary accomplishments are her novels, which have included five best-sellers and three finalists for the National Book Award.Grief Cottage is about an isolated cottage, the thin line between this life and the next, and the sorrows that transform people. As you can see from the praise at the top, it's absolutely extraordinary.

Thank you so much for being here, Gail. And next time, lunch is happily on me.

Do you remember the moment the novel was conceived?

I remember the exact moment. I was walking on the beach at Isle of Palms. Early morning. I saw some little shell creatures burrowing into the wet sand to keep from being eaten by the birds. I thought: "Everything seems to be sending me a message. Some good, some not." I heard it as the boy Marcus's thought. He had lived in my mind for some years. First as a boy who has lost his family and goes to live with a guardian at the beach. He keeps sane from grief by discovering two old people sitting on the porch of a dilapidated beach house. They are interested in him and knows no. He visits them every day. Only much later does he realize they were ghosts,.

Then when I was writing Flora (2013), Helen and her guardian Flora are listening to a spooky radio program in 1945. I made up a boy going to live with a crusty aunt who makes beach art to support herself. He goes for long walks and discovers an old ghost couple living in the ruins of a burned down cottage.

It wasn't until Grief Cottage that I began to understand Marcus's unusual history with his late mother, and appreciate his complexities. And the inhabitant of the ruined cottage was now the ghost of a boy lost in a hurricane a half century ago.

How was writing Grief Cottage different from writing your other novels?

Well, mainly, it is my first novel with a male narrator. I always knew this protagonist would be a boy. I wrote an essay, which is posted on my new web site, called "What made me write about a boy?"
An Interesting postscript. The first two stories I ever wrote (at age 9) were from male viewpoints.

The first was about a very rich  little boy who lived behind high gates and wished for a friend. The second was about a henpecked husband, Ollie McGonnigle, who pushes a person into a manhole because that person said, "Why don't you look where you're going?" Then Ollie comes home from work and his wife has invited the mayor of the town to eat supper with them. The mayor of the town is the man Ollie pushed in the manhole.

Talk to us about ghost stories!

The ideal ghost story for me, whether I'm reading it or writing it, is one in which the protagonist confronts, or is confronted by, something that may be a level of reality we haven't discovered yet. But when we meet our ghost, we seldom know that.

The tales I am drawn to are those in which the arrival of the ghost coincides with a mental crisis in the character's life.

And to be really effective, the ghost story must be grounded in the details of daily life. For Marcus, this means unpacking the dreaded boxes from his former life, caring for his reclusive, alcoholic aunt, visiting the ninety-five year old "self archaeologist" next door, and monitoring the well-being of the Loggerhead turtle eggs.

How can the present change the way these characters feel about their pasts?

I composed this epigraph to Grief Cottage: "Not everybody gets to grow up. First you have to survive your childhood, and then begins the hard work of growing into it."

I came to this knowledge as I was writing the book.. It could easily be something Marcus will realize when he is older. "Surviving your childhood" can mean reaching adulthood without going crazy or being a psychological mess. It can also mean, literally, getting out of your childhood alive.
In the novel, Marcus is struggling to stay sane and keep wanting to live. Aunt Charlotte, in her late fifties, achieves her hard won adulthood by using her art to purge the horrors of her childhood. And 95-year-old Coral Upchurch tells Marcus she is "doing archeology on herself" with the goal of discovering "what would be left of the essential me without any of my roles?"

Being a tortoise and turtle aficionado, I was fascinated with the sea turtles. Can you talk about them, please?

Ah, the sea turtles. In rental houses on the Isle of Palms, strict notices are posted on the refrigerator. In turtle-laying season do not leave lights on that can be seen from the beach. It will disorient the mother turtles as they come ashore to bury their eggs. In fact, you need to close your curtains if your bedroom is on the ocean side.

Guarding the turtle eggs in front of his aunt's cottage calls out to the caretaker in Marcus. He feels responsible to protect them through their hatching and dash to the ocean. He identifies with their plight. Some make it, some do not. The longevity of their species(forty million years, when "we've only been around for the last two hundred thousand") both comforts him and appeals to his preoccupation with death. ("Their kind will be around after I'm gone.")

In two words: the president.

To quote Auden: "Waves of anger and fear/Circulate over the bright/ And darkened lands of the earth/Obsessing our private lives."

For about a week I found it hard to use words.. I started drawing again, which has turned out to be asanity saver. I draw at least one picture a day and have found it is a way to identify obscure feelings . And my skills are improving. They are all 4"x6" in size (Aunt Charlotte's curative paintings are all this size). The earlier drawings are on my web site, and I include two new drawings on each weekly blog on that site.

The world has shifted for me. Greed, cruelty, ignorance and incuriosity seem to be triumphing. Yesterday a Chinese doctor was dragged down the aisle of a United Airline flight because he refused to give up his seat to a United off duty crew member. The CEO called this an "involuntary de-boarding."

Yes, I am obsessed by what I can do to help RE-BOARD the values of kindness, generosity, and a proud desire to know more and feel more.You asked what question you did not ask me, and thus started me thinking: what question have I not asked myself.
I answered it through two drawings, which I will forward on to you.
Posted by Caroline at 1:28 PM