Damian McNicholl bases THE MOMENT OF TRUTH, his evoactive new novel, on America's first female bullfighter, Patricia McCormick, and he's here to talk about writing, following your dream no matter what the cost, animal rights and so much more 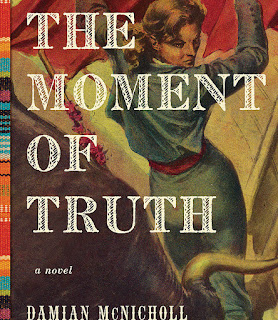 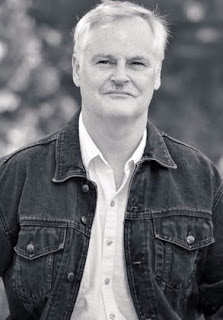 Damian McNicholl is the critically acclaimed author of A SON CALLED GABRIEL, TWISTED AGENDAS and now THE MOMENT OF TRUTH, about a woman determined to make it in the testosterone-filled arena of bullfighting. I'm delighted to host Damian here. Thank you, Damian!

What was the ‘why now’ moment that had you obsessed enough to write this novel?

Like other writers, I have a file of ideas for possible novels, but nothing on it was calling me. Nothing seemed important enough. Then, one morning I was web-surfing and stumbled across an article about the death of America’s first female bullfighter, Patricia McCormick. I read “But in the mid-20th century, the bullring, too, had a glass ceiling. Ms. McCormick could never shake the title of novillera, or apprentice fighter. Elevation to the highest rank required a special ceremony and sponsorship by a matador, and no matador would do such a thing for a woman.” That was my Eureka moment. Having strong sisters, I’ve always been interested in feminism and women’s equality and I asked myself, “What if?” That led to a year of solid research before I felt comfortable enough to start writing the novel, which I did in my mother’s living room in Northern Ireland while on a visit to spend time with her.

What was the research like and what surprised you the most?

There were so many angles and dead ends. I knew nothing about the world of bullfighting, very little about Texas and Mexico of the 1950s and my knowledge of women in the workplace during that period was also scant. Luckily, I’d honed my research skills at law school so I was able to plough through the mountains of information pretty quickly and determine what was relevant to Kathleen, the heroine’s story.

What really surprised me was discovering there had been another woman with American connections who’d fought the bulls a generation or so before Ms. McCormick. Her name was Conchita Cintrón and her father was a Puerto Rican West Point graduate, her mother was Irish American, but she had fought as a rejoneador, the Portuguese style of fighting bulls while on horseback. I have her make a cameo appearance in the novel because it was apparent from my research that she was an early feminist—she refused to kowtow to the Spanish authorities when she was told she could not dismount from her horse to fight the bull while appearing there—and I thought it would be good to show my heroine and her connecting.

Did anything change the plot you had imagined into something new?

It did, actually. Her trainer, Fermin, became much more complex as an antagonist. I like knowing where my novel will end pretty early on into a story, but his development, especially the inner struggles, led to many interesting turning points and conflicts between Kathleen and him that I hadn’t anticipated during the outlining of the work. Also, Kathleen experiences a deep crisis as a result of disobeying him early on in her move to Mexico and that has profound repercussions on her psyche that resonate right up until the last pages of the novel. Her love affair with Julio also unfurled in unexpected ways I hadn’t originally anticipated, also related to the circumstances leading to her emotional crisis. But that’s the fun. I enjoy being surprised as I write.

So much of this exquisite novel is about following your dream no matter the cost. Can you talk about that please?

I’m so glad you picked up on this. That is definitely one of the messages of the novel. I’ve always believed fervently that one must follow one’s dreams in life and that these dreams, the most meaningful, enriching ones, definitely can come at a high emotional and/or physical price. I think too many people coast through life out of fear they’re not good enough to do something, or they don’t have the experience, or society will frown upon them because their dream is outside their family members, friends or colleagues expectations of what they should do in life. So many people settle for second best for these reasons and often end up on their deathbeds wishing they’d lived their lives differently. Kathleen decided early on that she was going to do something she loved even though society’s expectation of the role of women in the workplace in the 1950s was very narrow.  Her mother did not want her to leave for Mexico to fight the bulls and, even though the concept of animal rights was not developed as it is now, thought it cruel. Her fiancé did not want her too, either. Kathleen had no experience qualifying her do this for a career. But she knew it was her calling to be as good as any man in the bullring and she would not be complete if she did not go on that journey.

I’ve two nieces arriving for a visit soon and I want them to have a fabulous time in Bucks County. There’ll be good food and vino. Friends have invited them to a party and they’ve got a pool so I can hope it doesn’t rain. Other than that, I’m a bit out of touch about what two fun-loving, twenty-somethings like to do when they’re on vacation. Suggestions are welcome.

Do I believe in animal rights?
Absolutely. Today, society correctly believes that animals have rights and they must be protected. I believe that the punishments meted out to those who treat animals cruelly are woefully inadequate and abusers should do lengthy jail sentences. It is time to stop treating animals as chattel. The concept of animal rights didn’t exist in the 1950s, the period in which my novel takes place. The Humane Society did exist, its remit confined to ensuring that domestic animals, mainly dogs and cats, were not mistreated. Bullfighting is regarded as cruel today, but it does also have many supporters, especially in Spain, Portugal, Mexico and other Latin American countries. Increasingly I feel guilty that I still eat meat, but as yet I have not become vegetarian.
Posted by Caroline at 4:12 PM