John Freeman Gill talks about The Gargoyle Hunters, NYC in the 1970s, fathers and sons, obsessions (my favorite thing), writing and so much more. 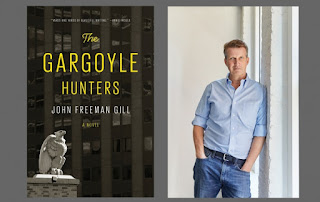 So, tell me about the extraordinary family in The Gargoyle Hunters?
The fracturing family at the heart of The Gargoyle Hunters lives in the same Queen Anne row house where I grew up, on East 89th Street in Manhattan between Lex and Third. It was something of a grandly tricked-out imp, just twelve and a half feet wide, squashed in the middle of a jostling troupe of six. My own parents separated in a painful fashion while I was a small child in that house in the early 1970s, and so the plight of Griffin Watts, the 13-year-old protagonist of The Gargoyle Hunters, echoes my own in that period, although the characters are all inventions.
The book is really about fragmentation in all its manifestations. I wanted to tell both a small, intimate story of fathers and sons, and also a big story about the near death of New York during the 1970s financial crisis, when the city nearly defaulted on its debt. The novel’s story takes place in the year and a half or so leading up to the famous Daily News headline “Ford to City: Drop Dead.”
Once I realized that the stories of Griffin’s family and his city could quite organically be told in the same novel—both, after all, echoed aspects of my own childhood—I allowed Griffin to be recruited into his father’s illicit and very dangerous architectural salvage business. Pushed by his obsessive, manic father, Griffin clambers around the tops of buildings, using power saws and crowbars to steal exuberantly expressive 19th-century architectural sculptures right off the facades.
In this way, the vividly crumbling city of my childhood became not only a metaphor for the family’s disintegration but also a very real, concrete backdrop in which the story of the father and son could unfold.
What kind of writer are you? What surprised you about writing this particular book?
I am a fastidious writer. I labor enormously over the language, the sound and rhythm of the sentences. I read everything out loud periodically as I write, and every morning, for continuity, I read aloud the previous ten or 15 pages I’ve written. But I’m also aware that most of the best, lightning-bolt stuff comes when you’re not overthinking things. It’s important to leave plenty of room for discovery. So I have two documents on my laptop when I’m writing: the text of the book itself, and a separate document in which I ask myself questions, talk to myself about plot or character problems, or just free-associate wildly, banging away—often in sentence fragments—at an image or scene that feels powerful to me but that I don’t yet understand. This last activity involves turning off my own persnickety internal editor and allowing myself not to worry about polishing the sentences, so that I can grope my way to what feels most exciting and alive. I always trust this instinct. For me there should always be a tension between controlling the shape of the novel through outlining and endless contemplation, and occasionally giving myself free rein to stumble into discoveries.
What I think surprises me most is how inevitable everything about the novel seems in hindsight, when the book is really composed of a thousand little discoveries along the way that you never saw coming while you were writing.
I loved reading about NYC in the 1970s (I was here in the 80s). What do you miss most about that time--and what don't you miss?
I miss the messiness of New York in the 1970s. By this, I don’t mean the graffiti-blasted subways or the tons of uncollected garbage rotting at the curb during the sanitation strike. I mean the uncertainty, the surprise. The New York of today is pleasant and orderly for the most part, but along with that order comes a predictability that has robbed the city of much of its fun. 1970s New York was a place of peril and possibility. Along with the unruliness came a Wild West sense that anytime you went out for a walk you might see something or meet someone unusual. I loved that constant sense of imminent discovery.
So much of this extraordinary novel is about fathers and sons and how they navigate their relationships. Can you talk about this please?

I think almost all children, up to a certain age, labor under the misconception that anyone bearing the title “father” is somehow intrinsically qualified for the job. As Griffin, looking back at his childhood from middle age, says of his dad at one point, “trusting one’s parents is an occupational hazard of being a child.” Fathers, whether they deserve to or not, tend to wield an outsize influence over their sons, and in particular over the sons’ understanding of what it means to be a man. In the course of this novel, Griffin learns precisely what he needs to learn from his father, though Griffin’s self-discovery ends up being quite different from what his father thought he was imparting.

What's obsessing you now and why?
I’m in the early stages of developing a new novel I’m excited about, and I find that my mind is forever twitching with new ideas about how I might tell the tale. It’s a scary but exciting place to be, a moment of uncertainty but also of invigorating possibility.
Set against this obsession is another (involuntary) obsession: The grave challenges to our Republic posed by the current president’s disdain of our democratic institutions. To write a novel one needs to shut out the world for great chunks of time, and at this point in history, I feel it’s impossible to be a responsible citizen without keeping abreast of the threats to our Constitution. I happen to be reading Ron Chernow’s remarkable biography of Alexander Hamilton at the moment, and the juxtaposition of today’s battles with those of the early republic is pretty fascinating. The political warfare was at least as vicious in our nation’s early days, but with one major difference. As nasty as the fighting became between Hamilton and his opponents, Jefferson and Madison, it seems clear that all the combatants had the best interests of the fledgling nation in mind; they simply had vastly different views on how the republic should develop and they deeply distrusted their domestic political adversaries. By contrast, our very democracy has been compromised by Russian interference in the most recent presidential election, and it remains to be seen whether there was complicity in this effort by powerful Americans. I find it disturbing that the president doesn’t seem to have the slightest interest in learning about Russian efforts to manipulate our election.
Where did your fascination with lost New York come from?
I think I essentially osmosed it as a child. My mother is a native New Yorker who has spent more than 60 years painting street scenes of doomed city buildings just before their demolition. When I was growing up on East 89th Street and later on Riverside Drive, the demolished landmarks of old New York were alive and well on my family’s walls: trains clattered over the Third Avenue el in our front hallway. Cheesecake was still being served by the 57th Street Automat in our kitchen. The Fifth Avenue Bonwit Teller, not yet razed to make way for Trump Tower, sold haute couture dresses in my mother’s bedroom. Growing up in that environment, it was inevitable that I would become fascinated with New York’s relentlessly changing streetscape.

What’s more, our home was something of a salvage yard, crammed with a hodgepodge of iron railings, stained-glass windows, and gorgeous stone carvings and terra-cotta castings my mother had rescued from demolished city buildings. I was therefore sensitized, from a very early age, to New York’s elbow-jostling relationship with time, its essentially ephemeral nature.

Later, when I began writing for The New York Times, I often chose to do stories about historic preservation and the evolving cityscape. The Gargoyle Hunters is informed by both my emotional connection to the lost city and by everything I learned about architectural history and historic preservation as a journalist.