Tony Earley talks about his brilliant new collection of short stories, Mr. Tall, being sentimental and sad, ghosts, and so much more 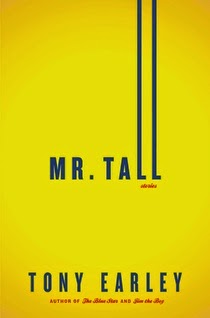 I'm sort of giddy that I get to have Tony Earley on my blog. I've been studying and reading everything he's written since his astonishing debut, Here We Are in Paradise.  In 1996, Earley's short stories earned him a place on Granta's list of the "20 Best Young American Novelists", and The New Yorker featured him in an issue that focused on the best new novelists in America. He has twice been included in the annual Best American Short Stories anthology and he was inducted into the Fellowship of Southern Writers in 2010. He lives with his wife and two daughters in Nashville, Tennessee, where he is the Samuel Milton Fleming Professor of English at Vanderbilt University. He's also the author of Jim the Boy, Somehow Form a Family: Stories That Are Mostly True, and The Blue Star, and his latest collection of stories, Mr. Tall, is phenomenal. Thank you so, so much, Tony for being here.

The stories in this stellar collection take place in the South, so I want to know why? What draws you to the South?

Aside from the three years I spent freezing in Pittsburgh while my wife was in graduate school, I've never lived anywhere else, so I don't know enough about any other part of the country to write about it as well as I would want to. If I were to write a story set in, say, Maine, all the characters would still sound like North Carolinians.

What I love so much about your writing is the sparks of humor in the stories, the strangely wonderful way of looking at the world that is as surprising as it is original.  Do you see the world the way any of your characters do?

Only the sentimental, sad ones.

Some of the stellar reviews I read have mentioned that “you’ve grown up.” My first response was, “what the heck does that mean?” before I realized, of course, that they were talking about a more mature talent. Care to comment on that?

I guess that finally being considered grown-up at age 53 is a good thing. All my life I've wanted to sit at the big table. And while I like being considered a mature talent, I hope it isn't code for beginning the long, slow inexorable slide toward death.

Most of things I write involve years of thinking and self-loathing followed by sporadic bouts of typing. I suppose the amazing thing about my process is that I've written five books without ever appearing to write anything at all.

My obsessions have been constant for some time now: ghosts, tornadoes and vintage cars, particularly Alfa-Romeos and Saabs. I got two of the three into "Mr. Tall." I sneaked in a Saab, but it isn't vintage.

Q: Which of your five books do you consider your best? A: This one.
Posted by Caroline at 1:25 PM