Johanna Stein talks about How (Not) to Calm a Child on a Plane, picking mime over the Air Force, being a Blue Belt, and so much more 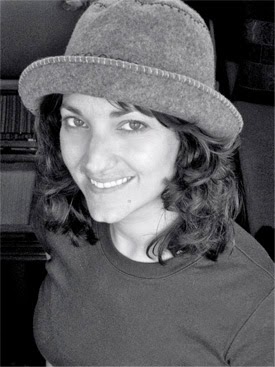 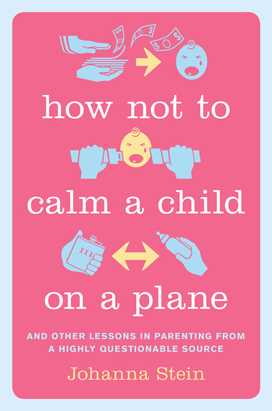 Joanna Stein, writer, producer, director and actor has been seen in such places as Comedy Central, The Disney Channel, Nickelodeon, The New York Times, Parents Magazine, The Huffington Post, PBS, The Oxygen Network, Showcase, The Movie Network, UPN, VH-1, Noggin, CTV, The Family Channel and The CBC.  She's also the creator of hilarious videos and articles, including Thanks Mom  and How (Not) to calm a Child on a Plane from the New York Times MotherLode column, and Dad, You're My Hero. It's impossible not to laugh while reading her newest book How Not To Calm a Child on a Plane and Other Lessons in Parenting From a Highly Questionable Source. I'm so jazzed to have Johanna here. Thank you, Johanna!

This book came from a Motherlode essay. What made you want to expand it into a book, and how terrifying a process was it?

First off – thanks so much for all those nice things you said. Like most (all?) writers, I live in fear of being exposed as a no-talent fraud. So thanks for those words that I will use as ammo the next time those thoughts come a-calling and take root in my brainfolds.

It wasn’t all that terrifying of a process – not initially, anyway. In fact, it wasn’t until that essay came out in the New York Times and a few agents had approached me that it occurred to me to consider writing a book. (I hope to cripes that doesn’t sound obnoxious -- “oh, look at this opportunity that just fell at my little feetsies!” –- but if it does, know that I’ve been hustling my writerly wares in other mediums for years, and this was just the first time I’d thought to set my hustling sights on a book-type thing. Okay, enough disclaiming, now back to it…)

One of the agents who contacted me was Doug Abrams of Idea Architects. Doug has worked with people like Desmond Tutu, Nelson Mandel and Richard Branson, so when he wrote to me asking if I’d be interested in working on a book project with him, I was pretty sure I was being Punk’d. But no, turns out he meant it.

Putting the book together took a lot of work (because I write a lot of phenomenally shitty first drafts), but it still wasn’t particularly terrifying. That part came after – once I’d turned the book in and realized there was no turning back. I’d wake up at two o’clock in the morning, then enjoy an all-night anxiety attack.

As a comedian, I’m used to getting feedback relatively quickly. You stand backstage for a few minutes getting sweaty and diarrhea-y, wondering/hoping/praying that the audience is going to laugh… then you step onstage, and whether you succeed or fail, at least the waiting part is over. But with this book, that feeling of backstage anticipation lasted for months. During that time I’d ask my husband and a couple of my closest, trusted writer friends (the few folks who’d read it before I turned it in) to “just tell me that I won’t be embarrassed by how terrible it is”.

Would you have done anything differently, besides not putting you hand inside an already used vomit bag?

Regrets? Not so much with the actual book… my “do-overs” have more to do with my overall creative path. I come from an academic family, so I never seriously considered making a career out of comedy. I took all my pre-med requirements in college, thinking maybe I’d go to med school… then tested to be an Officer in the Canadian Air Force (fun fact: I got called to report to Officer Training the same day I was offered a job to go on tour with a children’s mime troupe. (Yes, I picked mimes over the Air Force. I’m sure the Canadian Government was devastated over that.)

I moved to L.A. to attend grad school at the American Film Institute (where I studied cinematography), then spent another five or six years after that thinking that I needed to figure out what my “real” profession was going to be. Right around my 28th birthday I turned a corner; I took a day job working at a candle store and dedicated all of my free time to writing, performing and producing comedy. It wasn’t until I finally started to take myself seriously – when I mentally hung that shingle – that things started to happen, and the work started to come.

There are so many of those cheeseball clichés – “Dare to dream”, “If you think you can’t, then you’re right”, “You gotta swing for the fence” – but for me that cheese is true. So that’s what I would have done differently. I would have swung for the fence a lot sooner, and I wouldn’t have wasted all that time crying in my car. (Did I mention the car-crying?)

What I love is that this isn’t a guidebook, (guidebooks make every mother I know, myself included, want to curl up in a ball and wait for our kids to turn 12. There’s way too much pressure), but your book is a hilarious look at your specific mothering adventures--and the more riotous they get, the better I feel, and I bet the better all parents will feel.  Were you ever nervous about being so honest?

When I was pregnant I read every parenting book I could get my swollen fingers on  – I think I was hoping to learn how to do it right – but mostly I’d just obsess over all of the worst-case-scenario chapters. So no, I didn’t go into this book with any “real” advice to share -- my feeling is that there’s too much of that in the world already. Everybody has a freaking opinion about the right way to raise a child – and how wrong your way is. My goal was just to write a book about parenthood that would entertain someone like me (i.e.: a grown woman with the sense of humor of a 14-year-old boy).

I wasn’t nervous about being honest – you know that thing that prevents people from doing or saying humiliating things – is that an internal censor? I’m not sure what it’s called, because mine hasn’t been working for years.  Or if it does work, my desire to make people laugh is stronger, and my need to voice my ridiculousness trumps my urge to hide it.

I also believe that there’s an inverse power in sharing these types of stories; that if I tell you my most mortifying, embarrassing moments, and you laugh with me about them, they’ve lost their power to shame me – and hopefully, you will feel the same way about your own mortifying, embarrassing life moments. Look, when you get right down to it, we’re all complete idiots – and the moment we all accept that and agree to laugh at our shared fallibility…. well, I’m not saying that I’ve just solved all of the world’s problems -- actually, I might just be saying that. Get the Nobel folks on the phone, would you?

I also loved, loved, loved the Thanks, Mom video you made that went viral. How much was scripted and how much was pure surprise? Who did the parents of these kids react when they saw the film?

Thanks – it was such a gas to make. It was scripted – though we did improvise a little bit on the day we filmed.

The kids are all friends of ours (my daughter is in there too), and their parents were on set with us the whole time (and by “set” I mean hanging out in a park eating Costco snacks). I wanted to be sure that all of the parents were totally on board with what we were doing. People are always curious about the little swearing kid -- we’re really close with him and his parents (who are hilarious people and talented filmmakers in their own right (www.bickantzis.com) and who actually helped shoot the “Thanks Mom” video). So not only were they okay with the bit, his mom was shouting curse words to him (“okay, you know the “F” word? You can say it now, as loud as you want!”). He couldn’t have been more thrilled for the chance to curse without consequence – which comes across pretty clearly in his performance.

We shot a follow-up video for Father’s Day (“Dad, You’re My Hero” – the link is here), and for that one we tossed the casting net a little farther (i.e.: I threw it up on Facebook) – and tons of kids showed up for that one. The biggest challenge was making sure every kid ended up in the final piece. It was still a relatively tiny shoot – we had moms holding the boom mic, dads holding bounce boards… it was a pure guerrilla style, but I love shooting like that -- with a tiny crew of parents, by the seat of our collective mom-jeans.

You’ve got a resume to die for--writer, director, producer, actor, comedienne, and your work has been on TV and in film. So where are your sights centering next? And is there anything you can’t do?

Thanks… some days I am totally confused as to how I’ve arrived where I am. Part of it is the nature of show business – I started out thinking I wanted to be an actress, but I learned pretty quickly that there’s nothing more frustrating than waiting for the phone to ring. So I started to write… then when I realized I was going to have to wait for someone to produce my original material, I started to do that too. Same goes for directing.

Creatively, I’m got a few different things on the burner right now: I’m working on a staged musical... a goofy magical realism novel… and (insert hushed whisper) I’m in negotiations to adapt “How Not to Calm a Child on a Plane” for the tee-vee…. I can’t say right now who it’s for, but I’m pretty dang excited about it.

I took up TaeKwonDo and HapKiDo a year ago, so I’m pretty obsessed with that. I’m a blue belt now, which means that I’m pretty lethal --if you stand real still and don’t fight back too hard.
Posted by Caroline at 10:07 AM